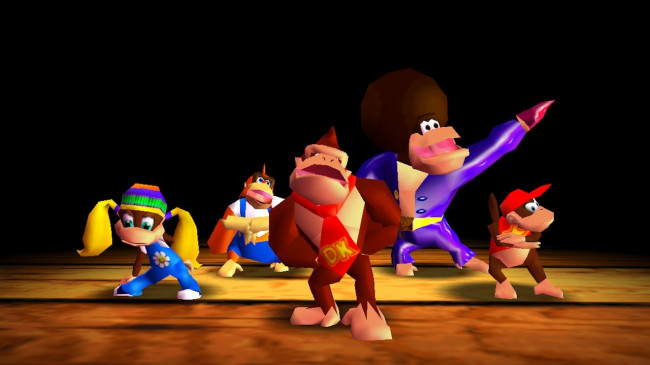 Turn to Channel 3 is about more than just reviewing retro games and seeing if they still hold up all these years later. It’s also about that moment in time when these games came out, whether that means in your life personally or within the gaming industry as a whole. Just what was going on in the world of gaming when these slices of gaming history came into play? Today’s topic during “64 September” definitely delves into this realm.

“Donkey Kong Country” set the gaming world on fire in 1994, with the subsequent sequel, “Donkey Kong Country 2: Diddy Kong’s Quest,” truly setting the bar for what the franchise and those behind it were able to do but, sadly, by the time the third installment in the series, “Donkey Kong Country 3: Dixie Kong’s Double Trouble” hit store shelves in 1996, the franchise as a whole felt watered down and long in the tooth as the dying Super Nintendo was being replaced by the likes of the Nintendo 64 and Sony’s upstart PlayStation console. What was DK and company to do?

Enter “Donkey Kong 64,” the first and only entry in the series for the N64 console. Would this game pack the same punch as the trio of predecessors before it? Well, one thing is certain – with its bright banana yellow cartridge, it would certainly stand out from the many N64 carts out there, but would that be enough? Let’s delve into this 1999 title and find out!

As with many of my reviews, you catch a certain theme in regards to a retro game and it tends to stay with you through the duration of the time you review said game. In the case of “Donkey Kong 64,” as many critics of the time also decreed, this is not as groundbreaking as the previous “Donkey Kong Country” titles, and it shows in many ways.

Take the soundtrack, for instance. While Grant Kirkhope, famous for his work on “Banjo-Kazooie” and “Banjo-Tooie,” was at the helm here, it just didn’t pack the punch of the music done in the “Donkey Kong Country” series by David Wise and company, as most of it felt forced, cheesy, and too cartoony. If you disagree with that and the overall notion that, by 1999, Donkey Kong and friends had “jumped the shark,” consider the song “DK Rap” by Kirkhope in the beginning of the game. He was quoted as saying it was created as a joke, but you almost wonder if it was a joke he had hoped would have never been mass produced and put on one of the most highly anticipated titles on the Nintendo 64. The joke’s on you, Grant.

The sound effects are pretty average, too, as there wasn’t much there that really grabbed me, so if you’re like me and wondering if, like some established franchises, Donkey Kong just didn’t make the transition to the Nintendo 64 as well as others, trust me, just on soundtrack alone, you’re not the only one.

If there was one word to describe the graphics in this game, it would be vast. In the same way “Super Mario 64” took the Mushroom Kingdom we had grown up with and expanded on it with huge open worlds (for the time, anyway), this game took the characters and worlds we had known of prior and expanded them in a way that almost creates a Donkey Kong universe of sorts. That being said, there were still moments where the graphics seemed a bit flat and suffering from the dreaded polygon curse that was still lingering in the late ‘90s console gaming world.

Once again, if you’re someone who grew up in awe of the pseudo 3D graphics of the original “Donkey Kong Country” game, then you’re left feeling a little unimpressed with what you see here, at least in some aspects. Still, you can’t deny the quality of work done here in creating these varying environments and collection of characters.

Like other brethren within the realm of Rare, as well as Mario’s debut on the N64, “Donkey Kong 64,” while still possessing a lot of the same kind of gameplay in its predecessors, focuses more on the aspect of collecting specific items and utilizing the various abilities of the entire team of Kongs in order to finish the game. For those familiar with the “Banjo-Kazooie” titles on the N64, you will certainly feel right at home here, while some gamers may actually feel overwhelmed by the sheer amount of unwarranted tedium and difficulty of some portions of the game.

It is also worth mentioning the multiplayer mode in this game although, to be frank, I didn’t feel there was much to it to make it anything more than a novelty, all because games like “Perfect Dark,” “Goldeneye 007,” and “Conker’s Bad Fur Day,” all under the Rare canon of titles, had great success with it. However, there were modes in those games that were either at the very center or further illustrated what makes those games so great. This felt a bit more like an obligation to those few DK fans who actually wanted it, yet probably realized they didn’t get what their lofty dreams had come up with.

Don’t get me wrong, “Donkey Kong 64” is not a bad game and, perhaps to some, comparing it to the “Donkey Kong Country” series may be a bit unfair. However, I still left this game feeling like there wasn’t that wow factor you’d expect from a game that had DK and crew in it. I didn’t feel like I was playing something that played a vital role in the evolution of video games. I felt like I was playing “Donkey Kong-Kazooie” or some other mashup of titles that just so happened to have Donkey Kong in it.

“Donkey Kong 64” did receive the Nintendo Power Award for 1999 Game of the Year, as well as an E3 1999 Game Critics Award for Best Platformer, so obviously it was no slouch in the praise department but, in truth, if you’re not what many gamers refer to as a “completest,” someone who has to unlock every bonus, find every hidden item, and collect every necessary item, then this game can feel quite tedious and overwhelming.

In the end, it is still a necessary piece of any serious N64 collector’s stash and is only one of three games in the system’s library that flat out requires you have an Expansion Pack, “The Legend of Zelda: Majora’s Mask” and “Perfect Dark” being the others.

Join me next time as I continue my work on the Nintendo 64 and a game that is no stranger to competitive gamers anywhere – “Super Smash Bros.!” Game on!