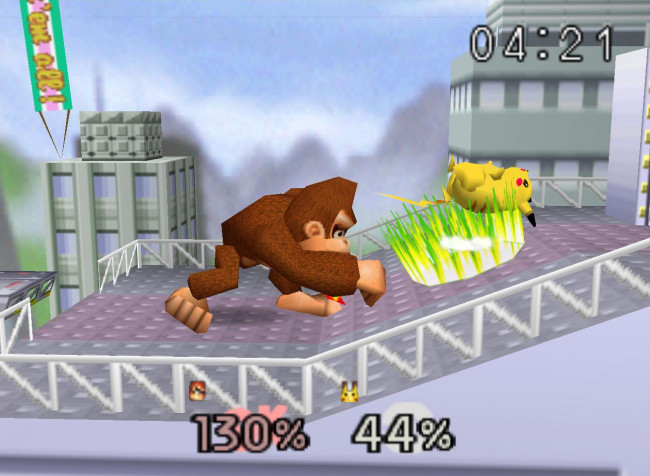 I seem to have weekly conversations with customers about games for the Nintendo 64, unquestionably one of the most popular consoles in my store, with a library as equally sought after. With games like today’s topic on Turn to Channel 3 during our “64 September,” it’s easy to see why because this is a game that sparked a revolution in the gaming world for certain.

Remixed or extended versions of popular Nintendo franchise music is something we take for granted and come to expect within the now mighty “Super Smash Bros.” phenomenon, but at the time of this original classic, it was simply unheard of. The results, of course, have become etched into the minds of gamers, whether they’re fans of this game or not. Every aspect of “Super Smash Bros.” is a further enhancement of what we know and love about all these beloved Nintendo characters, and it begins here, with one of the best soundtracks on the Nintendo 64, hands down.

Not only are original Nintendo gaming tunes tinkered and fine-tuned, but new music created specifically for this game would go on to become staples of future franchise releases and, in a way, this is kind of how you can tell a good Nintendo game from a great one. The great ones take what you know that extra step further, while also creating things that are fresh and new, and for Nintendo and the N64, few games had that breath of fresh air “Super Smash Bros.” had; the soundtrack is among the finest examples of that.

Now before any diehard fan of this franchise gets angered at my average rating of the graphics in this game, please understand, I still believe the levels and characters hold up fairly well, but there are certainly moments in this game where the dreaded polygon gods rear their ugly heads and things just look and feel blocky with a bit of a drag to the frame rate. While this is forgiving when comparing ‘90s technology to present day, it doesn’t change the fact that this is the only aspect of the game that, albeit in a minor way, has not aged well.

As new technology took this franchise by the hand, obviously graphics were smoothed out and the games would look more and more breathtaking but, as with all the heavy hitters within the Nintendo canon, the humble beginnings here definitely show some flaws unnoticed during its infancy.

Simply put, if you’re unaware of the fact that this is still a game featured in competitive tournaments, family game nights, and college dorm rooms, then you need to get your head out of the sand because “Super Smash Bros.” still captures gamers and entrenches them in a way some modern games cannot, and for good reason. Yes, the nostalgia factor is strong with this one, but you need to look at it this way. In the same way gamers pined for what would become “Super Mario Maker,” becoming one of the bestselling games on the Wii U console, the same could be said for “Super Smash Bros.” It was like Nintendo said to every one of their consumers at the time, “We hear you, and here’s what you asked for.”

“Super Smash Bros.” took a basic fighting game premise, obviously added a roster of characters who, up to that point, had rarely if ever interacted with one another in Nintendo’s vast universe, and sprinkled in bonus games and a giant malicious hand, further proving that Nintendo, if only at that point, could take anything, even a giant gloved hand, and make it work.

Like many “Super Smash Bros.” titles, and those heavy hitters within the Nintendo 64 library, the original game will definitely have you digging into your wallet for some substantial dough, as it still costs more than most modern used games do, with my store having it at the consistent price of $40, but it can fluctuate and is always going up in price on eBay and Amazon, it seems.

Is it worth $40? Well, your inner child probably thinks so and, if nothing else, it represents the cornerstone of great games on the N64. If your budget allows for such a purchase and you’re serious about collecting for the console, then you definitely need to secure a copy.

Well, that does it for me. Next time on Turn to Channel 3, we take a look at the other half of the seemingly never-ending debate of what the greatest “Legend of Zelda” game of all time is. On tap next week is “Majora’s Mask!”

Until then, fall is coming, so grab your pumpkin spiced latte, your hoodie, and a good game because that combination just might be the secret of life. Game on!