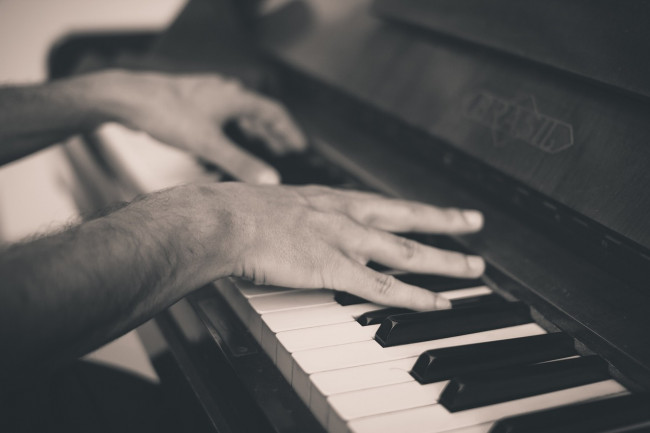 What a week, right? With all eyes on the election and current events, I feel strange sitting down to write about music, but I won’t get into any of the trending topics out there. Today, I am going to pull things in close and talk about something that matters very much to me – songwriting.

Looking back at this column, I am not sure if it makes any sense. It’s kind of a word salad. Basically, I am talking about the price of compromising… and not compromising. Here goes…

On a bulletin board in our kitchen, my wife and I have little scraps of paper tacked up with various sayings and facts. Two in particular struck me this morning as I was looking for something to write about. The first one (author unknown) says, “An average worker bee makes half of a teaspoon of honey in its lifetime.” The second one is from Friedrich Nietzsche: “The man who fights too long against dragons becomes a dragon himself.”

For now, I am just going to tack those two quotes at the top of the page. We will come back to them, I promise.

One of my favorite interview questions I have ever been asked is, “What has been your favorite part about being in the music business?” Playing to thousands of people? Seeing the world? Hearing your songs on the radio? Meeting your idols?

None of the above is my favorite. My favorite, hands down, is the feeling you get right after you have finished writing a good song. I’d say “great song,” but I think that is up to other people to decide, so I’ll stick with “good” song.

Why is that my favorite? Because that is the closest to your truth you will ever get. You sit down and noodle around. You develop ideas and discard others. Then, all of a sudden, it comes to you and you have the whole thing mapped out in 20 minutes. That is the way it works. When you finally find it, it seems so obvious. Until then, it is maddening.

I always feel like I am at my best when I am writing about my family. For others, it may be social issues, love, partying, or whatever. It doesn’t matter as long as it comes from the right place.

After the song is written comes everything else – rehearsals, recording, mixing, mastering, artwork, etc. After that, you start fighting dragons – playing gigs, dealing with clubs, managers, lawyers, fights within the band, marketing, radio promotion… the list goes on.

These are battles you may win or lose. But even if you win, it pales in comparison to that moment when the song is born. The biggest thrill isn’t winning; it is the moment you know you have something worth fighting for.

To quote Friedrich Nietzsche again: “He who has a ‘why’ to live can bear almost any ‘how.’”

You might be like that honey bee I mentioned above; maybe only a few people will ever hear your work. It doesn’t really matter much. It will still hold up for you 20 years later if you told the truth. Conversely, if you create something dishonestly and it succeeds, you won’t get any lasting peace from the victory. That is just the way it is.

Well, that is the way it is for me, anyway.

I can see the dragon fighters rolling their eyes at me right now. “Winning isn’t everything – it is the only thing.” “The end justifies the means.” And on and on…

This attitude may have merit in sports, business, or the practice of law, but I think it should stay out of the arts.

If our artists can’t be trusted, then who can? That is where we go to be inspired, to gain perspective, and feel better. Sure, you have to live in the real world, but you can’t just build your music around a marketing strategy, can you? I mean, did John Lennon really mean the words to “Imagine” or was he just trying to sell records?

I think he believed it. Naïve as that may be, I believed him. I trust his art.

Sometimes, to keep someone’s trust, you have to be willing to lose. And losing is a shitty marketing strategy.

Any musician who does this gig for a long time reaches a point where they lose sight of why they wanted to do it in the first place. That is why I love to talk about music with non-musicians. They can love it for all the right reasons without having to fight dragons every day.

That wears at you over time until one day you realize that the kid who just loved music is now an angry old man spitting fire to stay alive. Compromising at every turn, he runs down the rabbit hole chasing after something even he can’t remember.

I got close to that point a few times, but I could never bring myself to not care, to discard what moved me about rock and roll in the first place. So I walked away.

I always wanted to trust the artists I loved, so I figured that the least I could do, in some small way, would be to try and live up to the standards I had set for them.

Lots of times I have found myself in various situations asking myself, “What would Neil Young do?” or, “What would Tom Waits do?”

Sometimes the answer to that question is to tell someone to fuck off. Then move on. Music, at its best, is indeed a powerful thing.

Usually that leads me back into my cave to write some new songs. That is where the truth lives. Always has.

So that remains… my favorite part.

The dragons will still be there tomorrow.

STRENGTH & FOCUS: Give your health a makeover!