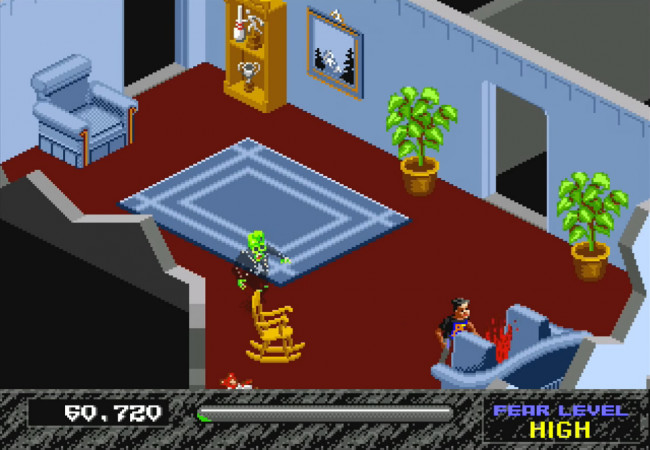 October is here, so that means we’re going to talk about some games that either scare people or at least remind them of things like Halloween and the horror genre of yore. Heck, I’ll even give the month a title as generic as candy corn. Let’s call it Turn to Channel 3’s “October Gaming Spooktacular!”

Did you say that last part in a ghoulish voice? I did anyway.

Join me as we take a look at a game often overlooked by less diehard and knowledgeable fans of the Sega Genesis. I’m taking about “Haunting Starring Polterguy,” a game where you play as a punk rock poltergeist taking revenge on a family by scaring them out of their home… many times! Let’s just see what this strange game is all about, shall we?

The key word here is grating, which I tend to use a lot when referencing audio on the Sega Genesis, but I truly believe I’m on point in this case. This is a game that, quite frankly, doesn’t have much of a soundtrack to begin with, and what you have is pretty lame and bland.

For some reason, the screaming sound effect in this game almost has static like PA system reverb; it’s just very scratchy and unnerving. While the music isn’t terrific, it is a lot better than most of the sound effects but, in the end, you can find a better overall soundtrack on almost any other Sega Genesis game.

The house you operate your ghoulish ways in is actually quite vast and detailed for a 16-bit Genesis title, almost to the point where you feel like you’re playing a ‘90s PC game. The characters are also pretty well detailed, despite being quite small due to the vast environment you operate in.

Some of the scares you use vary from bizarre to cheesy and just downright gory, which is one of the reasons gamers were drawn to the Genesis, as it didn’t seem to have those strict family friendly guidelines a lot of Nintendo games had to adhere to.

Is it fun to be the one doing the scaring in a video game? Absolutely. The reactions from your victims as they eventually flee the house vary from shrieking in horror to even peeing themselves! Yes, you read that right. While the kinds of scares you can use have a decent variety, the huge problem this game suffers from in the gameplay department involves the power system in scaring, if you will.

Ectoplasm is what powers your ability to scare people, and eventually it begins to run low. When this happens, you are dropped into a maze loaded with pits, flying objects, and grabbing arms, which can get quite repetitive over time. With no continues and no password feature, this is a game that, while you believe you’ve played it for hours, in fact, you haven’t, and now you’re sick of it. In short, this is a game high on the novelty side of things, but extremely low in replay value.

Imaginative for the time, perhaps even a unique breath of cold, undead for the console’s library, if you play this game a few times, you’ve had your fill, and yet collectors seem to search for this one quite a bit. While there’s certainly not another game on the Genesis like “Haunting Starring Polterguy,” I’m pretty sure that’s a good thing. If you’re looking for a quick time waster, this is fine, but don’t look for a fulfilling gaming experience with this one.

That’s it for me in this first week of October. Next time on Turn to Channel 3, we take a look at a game with a small cult following, but for reasons that have more to do with an uncovered prototype and not the actual game itself.

“Monster Party” for the NES is on deck for our next review!

Until then, fall is here, so go out and enjoy it… you know, after you sip some hot apple cider and game on! 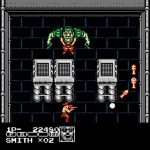