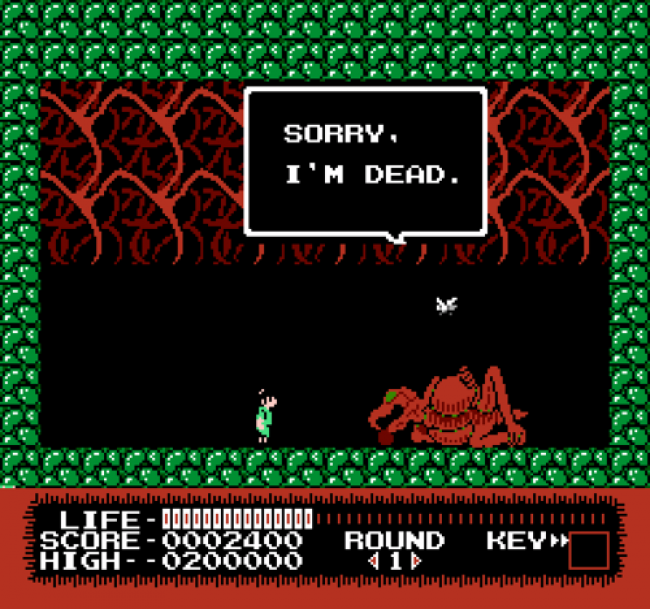 Sometimes in this crazy world of retro games, you come across a game that has a story that is probably greater than the game itself and, yet, these stories, these rumors that turn into truth, only further enhance the aura behind it. Today’s topic is a perfect example of this, of people digging for the truth, uncovering it and, sadly, discovering just how robbed we were as children of something truly great, while still left puzzled by some unsolved mysteries from nearly 30 years ago.

Today on Turn to Channel 3’s “October Gaming Spooktacular,” we look at a game with a small cult following, yet for reasons far greater than just the game itself. “Monster Party” on the original Nintendo Entertainment System is on tap today, so get your baseball bat ready and watch out for those giant man-eating plants!

While far from legendary in the vast catalog of great NES soundtracks, “Monster Party” provides us with some simple forms of chip tunes that, while pleasing to the ear, are nothing you’re going to remember after playing this.

What is impressive, however, is the fact that a game like this could have phoned it in with the soundtrack due to the sheer proposed novelty of such a game, but there’s a bit more there then you’d expect, that’s for sure. I find that the soundtrack overall is almost trying to trick the player into thinking they are playing some tame child’s game, when in reality there are some darker intentions here.

“Monster Party” is far from a technical marvel as far as graphics are concerned, but what’s there is definitely worth paying some attention to. Early on, things seem a bit too bland, too pastel for my liking, but once you walk past a large tree in the first stage, things take a much darker turn, with zombie heads, dogs with human faces, eyeballs with tentacles, and punk Asian kids. The bosses include things like a green Minotaur, sphinx heads, and even empty rooms with already dead spiders that apologize for the fact that they’re dead. Yeah, this is a very strange game that I’m sure a lot of parents complained about back in the day.

Did I mention there’s a beautiful princess who melts into a hideous monster? My 8-year-old self is already feeling a bit freaked out right now.

The tried and true linear style of “Monster Party” was beaten to death in the late ‘80s and early ‘90s platform titles, so the simple task of collecting a key and then fighting a boss monster doesn’t sound that appealing, even if the monsters are sometimes tied to pieces of monster movie pop culture at times.

What does set “Monster Party” apart from some of its action game brethren is the unique use of deflecting boss attacks via perfectly timed swings of your baseball bat. While some may feel the use of this is too widespread throughout battles in the game, I still feel for a title created in 1989, that’s a unique concept in comparison to simply jumping on a boss monster’s head three times or using one weapon to simply defeat another boss in order to take their weapon.

In the early 2000s, prototype screenshots of the Japanese Famicom (the earlier Japanese NES equivalent) version of this game began circulating, showing that the game was originally intended to be much darker and more morbid than the relatively lighthearted version that was ultimately released to American gamers. Considering what did make it into the game, I shudder to think what didn’t. In May 2011, a prototype of the canceled Japanese release was sold in a Yahoo! Japan auction for a robust 483,000 yen, or $6,000 American! Just over three years later, this unreleased version was leaked online, creating a quirky cult following for a game that is now over 26 years old.

“Monster Party” definitely makes an interesting addition to any NES gamer’s collection, with an average price tag of $12-$15 for a cart copy. Complete in box copies will run you far more, with most complete copies cresting around $50 on the market right now.

A novelty to some, a cult classic to others, one thing is undeniable – “Monster Party” is unlike any game you’ll play on the NES.

That does it for me in this second week of our “October Gaming Spooktacular.” Join me next time as we take a look at one of only two games created by Wizard Video Games way back in 1983. We do our best to avoid Michael Myers in “Halloween” for the Atari 2600!

Until then, stay warm and be cure to cuddle up with a hot beverage of your choice and some classic gaming, of course. Game on!