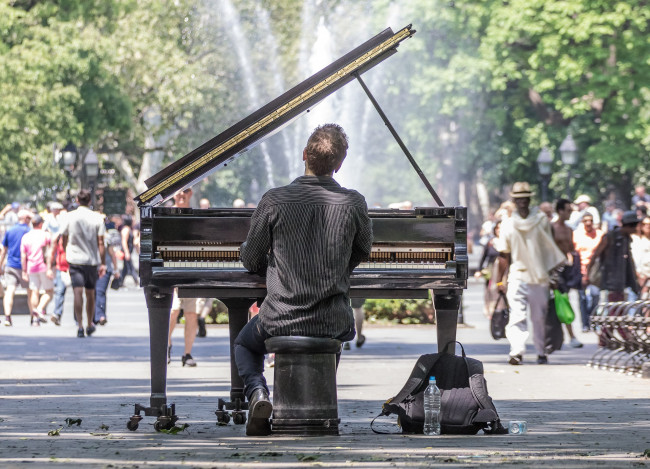 Greetings, faithful readers! As you may have noticed, I’ve been away a while. But while I was gone, I made sure to read all of your e-mails, requests, and suggestions.

I play music. I loathe using the term “musician” for a couple reasons, not the least of which is that it smacks of elitism, especially when used by the likes of myself and my ilk.

Christopher Parkening, Frank Zappa, the dude who plays second chair bassoon in the local orchestra, those folks are musicians.

I’ve played all kinds of music, for all manner of reasons, and not all of them particularly noble, such as playing music I don’t particularly like for a quick buck. See, if you’re actually practicing your art form (whatever it is), your motivation is passion, a need to say something in a specific manner. Getting paid isn’t part of the scheme. Despite the fact that it’s fucking awesome that on rare occasions you do get paid, if you’re in it to get paid, you’re not an artist, you’re a manufacturer. Period.

And there is nothing inherently wrong with being a manufacturer. There is a need, you fill that need, you are properly compensated for fulfilling that need, and a perfectly valid and reasonable transaction has occurred.

But if you call that particular type of performance art, you’re being dishonest. But I digress…

You see, there is the annoying issue of integrity.

Integrity, a certain morality, if you will, exclusive to each of us that can’t be found in anyone else’s music but our own.

Sure, playing other people’s music is essential to finding your own voice, as I have discussed previously. But if you don’t utilize or even discover your own voice, you aren’t truly creating actual art.

It’s the ethical decision to not do anything you don’t believe in that delineates between integrity and complacency. Being true to yourself is the only measure of integrity that exists, both in art and in every other aspect of life.

During a recent conversation, it was suggested that I play acoustic gigs in order to get the need to perform “out of my system.” I declined. You see, in my soul, it isn’t simply about playing music; it’s the music that I play that matters.

It boils down to this – I’m not willing, nor am I able at this point in my existence on this planet, to play covers in order to simply satisfy a random urge to just be “playing music.” Sure, I indulge in a covering some songs that I truly love and admire, sorta like an “I wish I wrote it, but I didn’t, so I’m stealing it!” kinda thing. But I’m not willing to go along to get along just so I can get the approval of a bar full of bungwads whose agenda is not to listen to me, but to see how many shots they can down before they have to drive home and pay the babysitter.

So, like I sez, I’ll play other people’s music that means something to me, but I will never regularly perform exclusively other people’s music again because I have my own voice and a personal monologue to deliver. If surrendering my integrity is the only way I’d be allowed to play music, I’d rather not play at all, thank you very much.

Because I fucking refuse to be anything but true to myself. Ever.

It’s me that has to live inside my head. Only me, nobody else – with my own conscience, forever. Not one single other creature on Earth has to live with my conscience. Only me.

Since it’s my head, my conscience and my integrity in the balance, fuck anyone and everyone who would dare demand I discard what I know to be my absolute truth.

Without qualification, completely and absolutely no one else, regardless of how aggressively they demand I do, can sway me from doing what I unequivocally know is right.

The fact that people actually have a sack to demand such a thing so that they can get what they want baffles me. There’s an asshole hidden within us all, I reckon.

The idea of someone else attempting to dictate my morality, integrity, and conscience is one of the single most abhorrent things I can imagine. I see no need to not refuse them and rebuke them as forcefully or more so, in kind. No one has the right to demand anyone else abandon their conscience. Ever. Period. Full fucking stop.

Carrying the shame of having played music you don’t believe in because the crowd threatens to boo you is a humiliation you will carry to the grave, as opposed to the relatively short time it takes to get the stitches out if you play the music your heart dictates you play and the fuckers throw bottles at you. And chicks dig scars.

I’ve long since run out of fucks to give for what people think of me, but there are other, younger, less experienced people than myself out there. It’s you lot that needs to learn this shit and learn it good…

Despite what you’ve been told, despite the lack of external reward and abundance of castigation, you have the right to play your own music!

If they tell you that unless you play polkas or in a Barry Manilow cover band, they’ll cancel the talent show, but your band plays melodic Swedish (not Norwegian, mind you) black metal, fuck ’em!

Let ‘em complain to the principal that you ruined the homecoming dance because you wouldn’t fall in line until they’re blue in the face. They’ll all have another chance conform to the system’s standards again at next year. And the year after that. And the year after that. And for many, many years after everyone in the band has forgotten who Barry Manilow actually was. Longer still after they’ve forgotten how to sing in their own voices.

By refusing to surrender your voice, you will still see your real face when you look in the mirror when they can no longer bear to look into the mirror at all.

This is your life; this is your song. It isn’t anyone else’s, and nobody has the power to make you be untrue to yourself. Anyone who says otherwise, despite the situation, is a fucking liar with an agenda of their own.

To attempt to coerce another human being to abandon their integrity by intimidation, shame, semantics, or deception is the hallmark of a coward.

Perhaps. And if, for the sake of argument, I agree with you that rock ‘n’ roll is of marginal significance, that it is, in relative terms, unimportant (both of which are simply preposterous notions, mind you), if rock ‘n’ roll truly did not matter, yet you’d willing to betray your own moral compass over it, how will you possibly defend something that does matter when the time comes?

If you are willing to compromise your morality over a triviality, how will you muster the intestinal fortitude to not deny something greater when the cock crows thrice?

My dear, dear young’uns, it is your right, your duty to uphold your own truths.

It is your duty to play only the songs you want to play. You owe no one your soul, no matter what the stakes. Never. Don’t allow their allusion of catastrophes, real or imagined, sway you. Not ever. Never allow fear to replace what you know to be right.

So, weird alternate tunings move you more that A440? Fuck ‘em. Tune however you’d like. It’s not your obligation to tune to their pitch. There are plenty of other people tuned to your chord.

And if there aren’t, play with yourself like I do. All the time. Like, six times a day sometimes.

But by the same token (and it is an elusive lesson which we must all constantly remind ourselves of ), should Billy at First Avenue be correct when he tells you that nobody understands your music, but yourself and your band agrees, you have no right to force said band to play it, either. Anyone attempting to force someone else to compromise their integrity reveals that they have none themselves. That’s still true if it’s you doing the forcing, bucko.

Sometimes in life, you just have to play a gig solo. It’s that simple. Sometimes it’s better to suffer on your own than live comfortably surrounded by delicate men.

Play your own song. It is yours and it is sovereign and sacred. Even if the whole world thinks you’re wrong, it doesn’t matter. Because as long as you know you’re right, you’re right and the rest of the world is wrong.

Your song is your integrity. Your integrity is your soul. Sing with that soul, no matter the cost.

And always remember that anyone who tries to change your tune can’t carry a tune of their own.