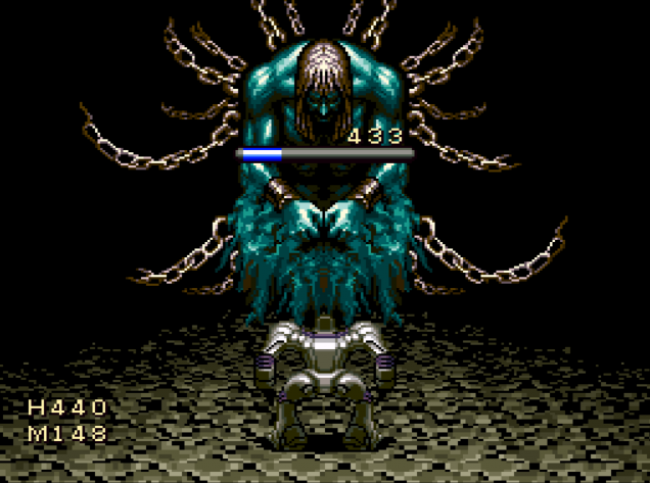 On this, the second week of games this month that I am personally thankful for here on Turn to Channel 3, we take a look at a game I still fondly recall playing for the first time. This is a game I still proudly declare a hidden gem on the Super Nintendo, and one I always recommend to collectors of the console’s library that just so happen to love RPGs.

In the ‘90s, for the most part, you were either a Squaresoft or Enix gamer, which are two companies that would gloriously merge into the juggernaut known as Square Enix today. I never really took sides in this battle for RPG supremacy in the 16-bit days. Today, we’re taking a look back at one of Enix’s finest, “The 7th Saga,” on the SNES!

Unquestionably, this has one of the most underrated soundtracks on any SNES RPG, hands down. This is due, in part, to songs not having cool titles, although some do, but the bottom line here is there are many well-composed tunes in this game.

It possesses tracks for each character you get to choose from, as well as tracks to represent not only locations and environments in the game, but also various points in the story, which I’ve always felt great RPGs do, as it helps you to truly immerse yourself in the game and the world you find yourself in. The sound effects mesh well within all of this, and it comes together to make a beautiful, intense and, at times, breathtaking soundtrack that needs to be listened to. Go ahead, I’ll wait.

It isn’t the use (or perhaps overuse) of Mode 7 graphics within the realm of battles, but how seamlessly the game goes from the world map to these battles with the Mode 7 change. The beautiful eye candy of the battle scenes aside, even the towns, castles, dungeons, and caves of the game are all well-designed. The enemies are colorful, but also menacing, with bosses looking extra gruesome and huge standing in front of your warrior of choice.

You may find better graphics in other RPGs, but “The 7th Saga” gets so much right and is so balanced with the graphics that it will make other RPGs look lopsided in this department in some comparisons.

Let’s not kid ourselves here. When “The 7th Saga” was localized for the West, it became very difficult to play, in battles especially with enemies and bosses that were more often than not stronger than your character. Couple this with some puzzles and vast dungeons and it was easy to get frustrated with it if you weren’t up for the challenge. However, I think the fact that “7th Saga” not only encourages, but flat out demands you to build a strong strategy in so many facets of the game is what puts it ahead of many other RPGs of the time. Great RPGs, like any great game, don’t take you by the hand and teach you everything. The best games are those that involve trial and error, and you experience that a lot in your early goings with “7th Saga.”

This is also a game that involves strategy in the partners you meet up with and those you challenge to battle, as all of you are seeking the same pieces to take down the final boss, but facing a strong enemy that could have been an ally can mean the difference from being prepared for your final battle and being left without much to show for it.

“The 7th Saga” was set to have a sequel in the Japanese release “Mystic Ark,” but it was never localized as a true sequel, which is a shame. Still, if you want a change from your “Final Fantasy” titles of old, “7th Saga,” at only $20, is a nice, inexpensive pick up for the SNES that will keep you busy and, perhaps, frustrated during a great adventure.

Join me next time as we take a fond look back at “Super Mario Bros. 2” on the original Nintendo Entertainment System!

Until then, there’s one thing that will never change in this country, and that’s the great fun retro gaming brings us all, so game on!