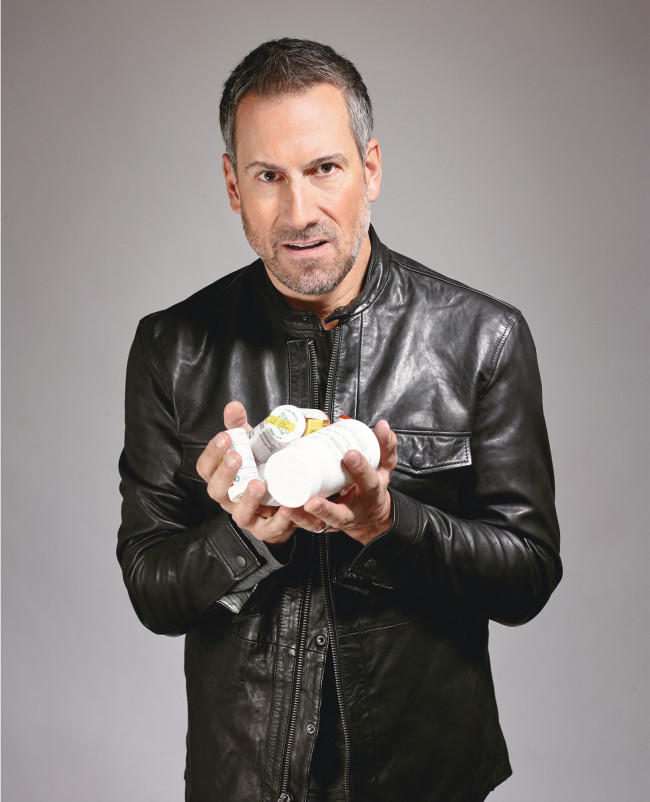 It has been announced that comedians Joe Matarese and Shuli Egar will perform stand-up at The Leonard Theater when “The Miserable Dads Tour” stops in downtown Scranton on Saturday, Jan. 28, 2017.

Tickets, which are $20 in advance or $25 at the door, are on sale now and can be purchased in advance via Ticketfly or at the door.

Joe Matarese grew up in Cherry Hill, New Jersey and now resides with his wife and two kids just minutes outside of New York City in the burbs. His completely autobiographical act pokes fun at his subtly dysfunctional Italian family, his own neuroses and use of the SSRI Celexa and the ADD med Adderall improving him in so many ways, life with two young kids, and his marriage to a psychologist (his perfect match).

Matarese’s talent for turning real-life struggles into comedic gems has landed him appearances on the most sought-after TV and radio shows, including the “Late Show with David Letterman,” “America’s Got Talent” (where he received a standing ovation from all four celebrity judges and the 2,000 person crowd), “Chelsea Lately,” “The Late Late Show with Craig Ferguson,” “Comedy Central Presents” (his very own half hour special), “The Howard Stern Show,” and his brand new one-hour special, “Medicated.” You may also recognize him from Bravo’s reality series “Better Half,” where he taught his wife to perform stand-up and she brought home the $20,000 prize.

Matarese has hit the stage four times at the prestigious Montreal Comedy Festival, leading to two development deals with major television networks. His podcast, “Fixing Joe,” is available every Friday in iTunes and everywhere else you can find podcasts. Now in its third season, the show’s format continues to evolve. True to its beginnings, every week Matarese shares a specific problem he’s having in his life in talk show format. New to this season, he starts each episode with brand new, in development, live stand-up on that week’s topic, giving fans a window into how his everyday struggles feed his comedy. He then brings the issue of the week to a comedian round table, fields phone calls from listeners who call into share their experiences and give him advice, and usually ends the show with some of his classic stand-up bits on the topic.

Over the first two seasons of “Fixing Joe,” there have been over 300 episodes with guests like Craig Ferguson, Artie Lange, Jay Mohr, Phil Rosenthal, and even Robert Romanus, otherwise known as Damone from one of Matarese ‘s all-time favorite movies, “Fast Times at Ridgemont High.” Season 3 brings more of Matarese ‘s comedy to his fans while keeping the real-life issues and poignant moments of previous seasons. As always, he keeps hoping that by fixing him, you fix a little of yourself at the same time.

Shuli Egar truly knows that if you’re going to make it in comedy, you’ve got to hustle. His start in stand-up began with him bombing every night in nearly empty casinos along the Las Vegas Strip. But in 2002, Egar’s luck would change. That’s when he met the one and only Howard Stern.

Egar’s love for “The Howard Stern Show” started in middle school. He moved to Las Vegas from Los Angeles to start his stand-up career and was a frequent caller to the “Stern Show.” After seven years of weekly calls, he was invited to play a round of blackjack with Stern and his gang while the show was in Las Vegas. As it happened, he won more than just money gambling at the table that day. Despite having no journalism experience, Egar was brought on as a correspondent for the “Howard 100 News” team and has been reporting on all things Stern ever since.

In addition to his work on the “Stern Show,” he co-hosts “The Jay Thomas Show,” the “Dr. Harry Fisch Show” on Sirius XM, and he has contributed to the “Scott Ferrall Show” and “Miserable Men.”

Egar has toured the country as part of “The Killers of Comedy” and “Ronnie’s Block Party,” and he regularly performs stand-up in clubs all across the U.S.

Other Stern regulars Artie Lange and the Reverend Bob Levy will perform at The Leonard on Friday, Dec. 30. Get the full details here.