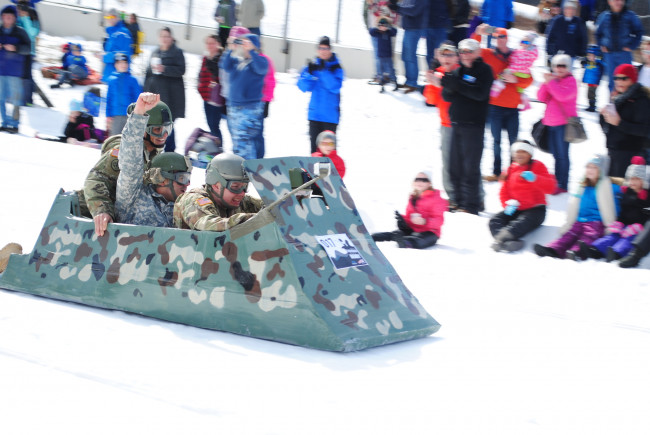 After a successful first year, the Fuzz 92.1 Cardboard Box Sled Derby will return to the snow tubing lanes of Montage Mountain in Scranton on Sunday, Feb. 26, 2017 at 10 a.m.

Kids and grown-up children ages 10+ are encouraged to gather friends and family to build their own cardboard sled to compete in a race to the finish line, or to at least look very stylish doing so. Team sledders will be competing to cross the finish the line with the most people inside their sled or ride in the most creative sled to hit the tubing area.

The sled can be constructed using only four materials: cardboard, tape, glue, and string. Added decorations that are not structural will be permitted, such as paint, Christmas lights, garland, etc. Use of any other building materials will disqualify the sled, and judges will be going over each entry during the competition. A spot must be available to place a letter-sized number plate received upon registration.

Maximum width of the sled must be under 7 feet. There is no length limitation, but the whole sled needs to cross the finish line to be eligible for prizes.

Check-in begins at 7:30 a.m., and the first sled will launch at 10:30 a.m. Pre-registration is required. A team captain must complete an application form for the team, and each participant will be required to sign a release form, which can be downloaded here. All completed forms will need to be submitted to Montage Guest Services (1000 Montage Mountain Rd., Scranton) no later than Saturday, Feb. 11.

The entry fee will be $30 per team, which can be paid here.

Crossing the finish line designates a complete run from top to bottom with no restart. Due to safety concerns, sleds will be launched individually on pre-selected lanes and judged as they are speeding down the snow tubing lanes.

There is no limit on the amount of team members, who are responsible for sled loading and removal from the snow tubing course. A disposal area will be available close to the snow tubing landing pad.

Getting the sled to the top of the tubing area is part of the challenge, so racers must keep that in mind while designing their sled – transporting will be necessary and their responsibility. A dedicated lane will be provided and graded to accommodate sleds being taken to the launch pad.

A pair of skis, a snowboard, wheels, a cart, or other devices will be allowed to be used only to drag/push/pull the sled to the top of the snow tubing hill; they must be detached before launching in the derby run.

The Montage Terrain Park Crew have offered to tow sleds to the top of the area, though Montage will not assume responsibility for any damage during transport.

A helmet and waiver is recommended for each sled rider. A limited quantity of helmets will be available the rental shop.

For guests and spectators who won’t be competing, there will be a snow tubing party from 10 a.m.-3 p.m. in the tubing plaza.

For more information, visit montagemountainresorts.com or the Facebook event page. 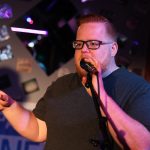