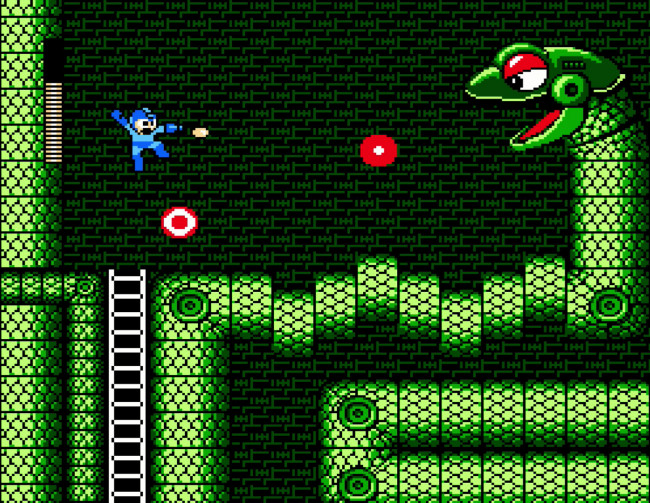 Mega Man, as a whole, has become quite the enigma for new gamers, as Capcom has been criticized heavily for dragging its star mascot, along with its creator, through the mud and muck in recent years.

With rumors swirling about Capcom wanting to revisit their franchises of old, it is certainly worth scrolling through the artificial memory banks, which is what we’re doing all month long here on Turn to Channel 3’s “Mega December.” Today, we take a look at the Blue Bomber’s third romp through the original Nintendo Entertainment System in “Mega Man 3!”

Critics who believe that “Mega Man” titles began to decline in later NES entries still have no platform to stand on as it relates to the soundtrack, if only in “Mega Man 3.” Each robot master has a distinct tune that suits the level quite well, and this was something that made fans hold “Mega Man 2” in such high regard.

When looking at lists of some of the best tunes in these 8-bit games, a lot of music from this “Mega Man” installment made the list, and it truly makes perfect sense to me why. To this day, customers can hear music playing from this title on my Bluetooth speaker and know what game and, chances are, what level in “Mega Man 3” it came from. The action-packed sound effects are still top notch, which once again showcases how memorable Capcom soundtracks were on so many of their games at that time.

I’ve always felt that one of the things that make video game staples so long lasting and enduring for generations of gamers is the belief that if it’s not broke, don’t fix it. “Mega Man 3” doesn’t have a whole lot of tricks up its arm cannon graphically, but it doesn’t need to. Familiarity, with a few spices thrown in there now and again, was just the recipe gamers wanted. No one truly expected developers to eclipse what was accomplished in “Mega Man 2.” They wanted to be thrown into an adventure with a lead character they remembered, in new situations that still followed that same line of thinking seen in previous games.

Sometimes, fans of a game franchise want what brought them in to begin with, and if change is what they want, they’ll tell you. At the time of “Mega Man 3,” gamers still wanted to latch onto whatever Mega Man meant to them, experiencing just enough new things to excite them, and this was accomplished here.

“Mega Man” games are notoriously difficult, although never so much that you want to stop trying, and I think that’s what great games do, whether that is a title developed in the ‘80s or ‘90s or something that’s coming out this holiday season. Gamers want to be challenged, not cheated, frustrated, or annoyed to the point that they question why they purchased the game in the first place. “Mega Man 3” has some truly grueling points in it that will challenge the steel resolve of any gamer, but you will want to come back for more.

That’s why we are now conditioned to expect these difficult moments in “Mega Man” titles, because we grew up knowing that they would lovingly kick our butts. Whether you’re trying to time jumps in Magnet Man’s stage or truly understanding why Hard Man’s level is, well, hard, you know that this is all just par for the course in “Mega Man” games.

Like other franchises with multiple entries, “Mega Man 3,” like those that came after it, is often overshadowed by the crown jewel of the Mega Man canon, “Mega Man 2.” This isn’t to say “Mega Man 3” is a bad game by any means, and I often believe that this was the last truly great entry in this series on the NES. After this is where my love of “Mega Man” titles began to steadily decline, where I personally felt things began to feel deluded to a point, overdone even. However, “Mega Man 3” is still a solid game that may not reach first place on the Top 5 “Mega Man” games of all time, but it isn’t too far behind, I’d say, at least if we’re just looking at his 8-bit adventures.

“Mega Man 3” is hovering around the $20 price range, too, so it’s also an affordable “Mega Man” game, which is more than can be said about later “Mega Man” titles on the NES.

Next week, we move right along to “Mega Man 4” on the NES, so keep your Mega Buster ready for action and, as always, game on!