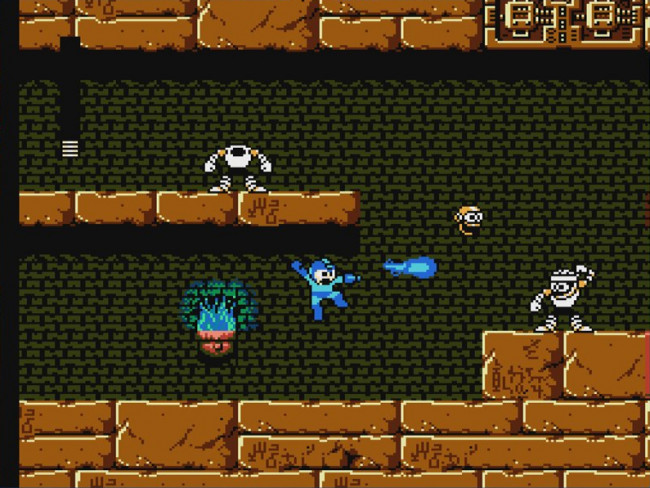 I hope you’re enjoying this romp through various “Mega Man” games in “Mega December” here on Turn to Channel 3!

Today, we fly our Rush Jet into territory that perhaps is more reserved for expense and availability and not necessarily quality, but that’s why I’m here, so let’s look at “Mega Man 4” on the original Nintendo Entertainment System!

Don’t get me wrong – “Mega Man 4” still possesses a lot of great level tunes that “Mega Man” games are known for. However, when looking at the catalog of entries on the NES, I wouldn’t consider this one of the stronger overall soundtracks, and I think that may be one of the reasons some gamers feel that this was the game to start the downshift in quality of “Mega Man” titles.

This isn’t to say that levels like Pharaoh Man, Bright Man, and Toad Man don’t possess that Mega Man charm, but in soundtrack alone, you begin to get this feeling like your favorite franchise just doesn’t have that same feel. “Mega Man 4” also has some action-packed sound effects, though, the most notable ones being the explosive defeats of larger enemies as well as the charging of Mega Man’s arm cannon.

Obviously, “Mega Man 4” is flashier than its predecessors, so why did I grade it graphically this way? Quite frankly because there’s a lot of lag at times, and there are moments where graphics flash if not downright vanish! Go big or go home seems to have been the theme of later “Mega Man” titles on the NES, which is fine, but the NES was getting long in the tooth, so trying to cram all of this great stuff onto an 8-bit cart just feels like a bad idea in the graphics department to me.

The levels and bosses all look great, as do the enemies, but it feels like, at times, the game flies by and has to catch up with itself when too much action is going on for it to handle. Mega Man’s charged Mega Buster shots look great and don’t suffer from any of the lag or vanishing acts that other aspects of the game have at times.

“Mega Man 4” is fun to play, and yet it did indeed make gamers wonder if this formula was getting worn out by this point. While adding some twists and turns in the plot, the return of the slide, and the new ability to charge up your shots, I am one of many gamers who choose to play this title like the run and gun “Mega Man” games before it because, when you strip away the few new bells and whistles, that’s what you’re playing – a “Mega Man” game of defeating a set number of robot masters, then Dr. Wily. If you enjoy that, with a bit of extra meat on the bone as far as plot goes, then yes, this is a fun game, but it truly feels like the appeal of these games starts to wear thin here.

Is “Mega Man 4” the worst game to ever be associated with our beloved Blue Bomber? No, of course not. However, it is far from the best and finds itself typecast as an average title in the series in the end. “Mega Man 4” keeps the core of these games intact, and that’s great, but it also rides a thin line between adding something new and yet deluding the quality and charm that made these games so enjoyable prior to it.

We just keep rocketing ahead this holiday season, and I sincerely hope you love basking in the nostalgia of this trek through Mega Man’s past. Next time on Turn to Channel 3’s “Mega December,” we continue on with “Mega Man 5” on the NES!

Until then, the countdown to Christmas continues, so finish that holiday shopping, but make some time to game on as well!