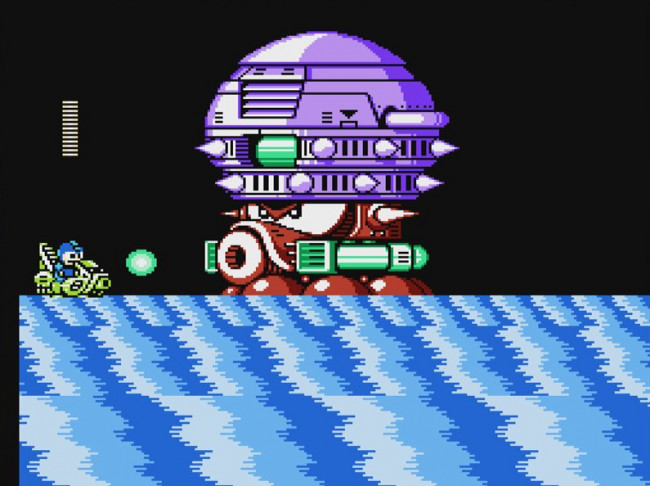 Change in video games is a funny thing. In some cases, change is good, breathing new life into a stagnant franchise, ushering in a new era of gaming, and bringing in a whole new demographic of fans. At the same time, change can totally turn longtime fans off, possibly even killing a franchise for many years. A true tightrope act, finding that balance is crucial and very difficult at times.

One thing is pretty certain in gaming – if you tease change just a bit, your fans will expect you to go through with it. Gamers don’t like being disappointed and messed with, and I think this is an issue with later “Mega Man” games on the original Nintendo Entertainment System, as today’s topic, “Mega Man 5,” is a prime example of this.

Charge up that Mega Buster because “Mega December” continues this week on Turn to Channel 3!

“Mega Man 5” did get a lot of high praise in the music department, and rightfully so, with a soundtrack that feels right at home with a lot of other stellar “Mega Man” game soundtracks. I’ve always believed that the best “Mega Man” tracks are those that fit in very well not only with the boss and the theme of the level, but also with the action as you run and gun your way through. That is a prominent thing as you play through the levels in “Mega Man 5;” the music was chosen wisely for each robot master, and that’s key to the enduring nature of Mega Man all these years.

The sound effects aren’t necessarily anything we haven’t heard before, but it still feels pretty fresh and meshes well with the soundtrack.

The lag and vanishing graphics from “Mega Man 4” were taken care of here, and that’s a most welcome change for this gamer. The levels definitely push the NES hardware to the limit and, in 1992, that’s a big deal because the Super Nintendo was in full swing and the NES was beginning its eventual swan song. I also felt the robot masters and their hordes of enemies looked pretty cool here. I’d be lying if I didn’t say I wished “Mega Man 2’s” graphics could have looked this crisp and detailed.

I think my problem with “Mega Man 5” is the same problem many critics had with it at the time. While these same people were amazed by the graphics and music in “Mega Man 5,” we were all left wondering what makes this “Mega Man” game different from any others? The answers aren’t pretty.

The charging arm cannon and slide are nothing new, and adding a Proto Man wrinkle to the already flat plot isn’t enough to convince me or any critic back then that we weren’t playing “Mega Man 4.5.” At this point in time, the “Mega Man” franchise was well over five years old, being a focal point in the NES console’s lifespan, so it’s kind of a letdown that something this vital to Capcom and the NES is pretty much the same that we’ve known with mere teases of difference that really aren’t enough to convince anyone that we’re playing a new kind of Mega Man adventure.

And no, a robot bird doesn’t convince me either.

“Mega Man 5,” musically and graphically, takes our Blue Bomber to new heights, while still taking him down similar roads as far as plot while leaving any possibility of innovation unchanged. With the NES winding down and the SNES taking the gaming world by storm, you’d think Mega Man developers would have changed gears, but they didn’t really. Capcom took its most dominant franchise, the equivalent of their fastest sports car, and put a new pine tree air freshener in it. Not cool, man.

It’s also worth noting that “Mega Man 5” is currently hovering anywhere between $40-$85 right now in the open market, and that, to me, is just insane. There are better games within the Mega Man canon that are nowhere near that price.

Join me next week as we end the year with “Mega Man 6,” the final entry on the NES!

Until then, have a very merry Christmas, and if you find a game under your tree that morning, be sure to game on!