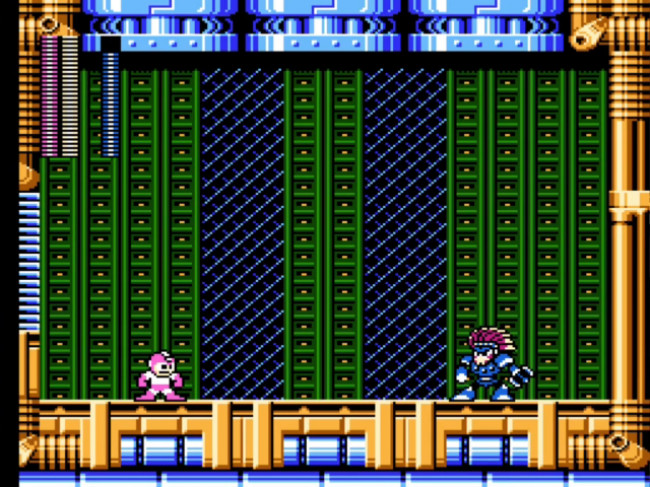 Well, another year of great gaming reviews comes to an end here on Turn to Channel 3, and I hope you’ve all enjoyed it as much as I have. I already have a complete 2017 schedule for myself (I always work on review schedules in the summer) and I can’t wait to get started, but we have some unfinished business to take care of today.

We must close a chapter, in this case, the Nintendo Entertainment System chapter of “Mega Man” games, as Mega December comes to an end. “Mega Man 6” is on tap for the last Turn to Channel 3 review of 2016!

After a pretty stellar “Mega Man 5” soundtrack, I felt a bit let down here, but I think this is a good way to showcase the idea that many critics of this series felt things were getting quite redundant by this point. Most of the gaming world had moved on to the Super Nintendo, to the point where it was Nintendo of America itself that licensed this title for North American gamers, as Capcom did not release the game here themselves because of that same fact. There are some good tracks here, but I would consider this another average soundtrack at best, comparable to “Mega Man 4” in many ways.

I did feel like there were more killer sound effects thrown in here than in the past, but not enough to really make the game feel too different. Once again, the double-edged sword of continuing on an established path versus going in another direction rears its ugly head throughout the game, and the soundtrack is no exception.

For a game at the very end of the NES console’s lifespan, you’d think there would be some kind of showcase of getting the most out of the hardware, but “Mega Man 6” seems to fall flat and into the category of bland in some aspects compared to its predecessors. A whole lot didn’t wow me, and even the little cut scenes seemed to feel “ho-hum” in contrast to other things we’ve seen on the NES. You get the feeling that even the artists involved here were like, “Can we move onto the SNES now?”

“Mega Man” games, like many established franchises in Nintendo’s arsenal, are built with a love of games, and while I wouldn’t necessarily say there’s no love in “Mega Man 6,” there seems to be a relief that Mega Man’s adventures on the NES are over.

Undeniably, “Mega Man 6” sends the Blue Bomber out with a bang on the NES as far as gameplay value is concerned, but what’s funny is that it is due to something developers probably could have done a few entries earlier. Mega Man now uses his dog Rush to combine powers to make a Power Mega Man and a Jet Mega Man, used to smash through a wall to find hidden paths or soar onto what is normally inaccessible in Mega Man’s normal state.

Despite this, the fact that this has come so late in the series, combined with the fact that the actual plot has changed very little, with the same format as previous titles, we are left wondering if these new innovations are enough to change the way we look at “Mega Man” titles. The answer, at least I feel, is no.

It’s pretty safe to say in retrospect that the gaming world in 1993 breathed a collective sigh of relief that Mega Man’s days on the aged NES were now over. It’s sad to see where Mega Man is right now, and here on his NES swan song there’s an odd sense of foreshadowing of what was to come. The “Mega Man X” series would rejuvenate the fledgling Capcom hero, and he would return to this 8-bit style years later, but without question, somewhere around “Mega Man 3,” our Blue Bomber peaked, and every follow-up after would dilute the quality and charm that made us so fond of the games to begin with, despite a plot twist here or a little innovation there, a little too late.

Thank you for another great year of retro gaming reviews here on Turn to Channel 3, and a special thanks to all the great folks here on NEPA Scene!

Next time, we journey onto a console seemingly forgotten by time, the Atari 7800, and the overlooked sequel “Frogger II: Threedeep!”

Until then, there’s no better way to ring in the New Year than by grabbing your beverage of choice in one hand and a controller in the other to game on!