On this day last year, NEPA Scene premiered a new Christmas song from Scranton singer/songwriter Patrick McGlynn called “Christmas Lights in June” that became the only holiday song we wanted to hear on repeat all season long. In 2016, he’s back with another original tune that is the perfect way to end a contentious election year.

Joined once again by his Blinded Passenger bandmate Steve Werner on the djembe and bells, McGlynn’s funny song sarcastically mashes the nasty political arguments people are still having with the madness of the holidays, cleverly pointing out the absurdity and hypocrisy inherent in both politics and our idealized version of Christmas that really only exists in traditional Christmas carols.

“It was inspired by the ridiculous outcome of the election. I started writing it before the election as a funny Christmas song about how hypocritical people are at Christmas when they say it’s a time for caring for one another and all that stuff, but then they go out and fistfight at Walmart over a flat screen. I was just going to ditch the idea because I already did a Christmas song last year, but after the election happened, the rest of the song just fell into place,” McGlynn told NEPA Scene.

“We teach our kids to be caring and help those who are less fortunate and not to bully people, and then we go and elect an idiot who says, ‘Build the wall,’ and ‘Grab ’em by the pussy.’ He is the epitome of what I will teach my son not to be like. Even though it’s sort of a funny song, it came from an angry place.”

Recorded at home in Santa hats and Christmas sweatshirts, the track even throws in a little plug for Bernie Sanders at the end. Some diehard Donald Trump supporters may listen and respond, “Trump won! Get over it!” but music has always been a way for artists to do just that, expressing themselves and dealing with whatever curve ball life has thrown at them.

And, besides, they’d just be proving his point. Let’s reach across the aisle, hang up some garland, and share some holiday love and generosity year-round. That’d be a change we can all believe in. 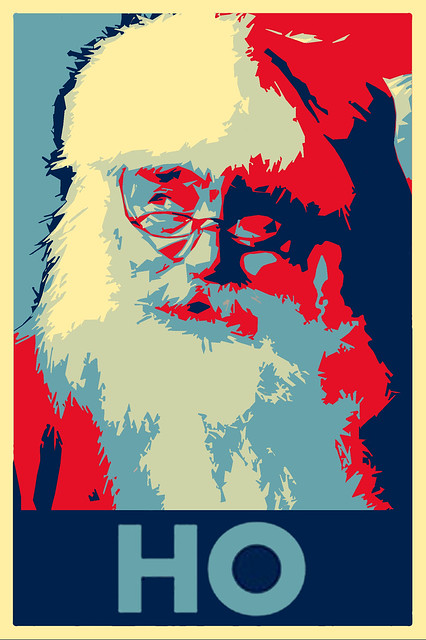