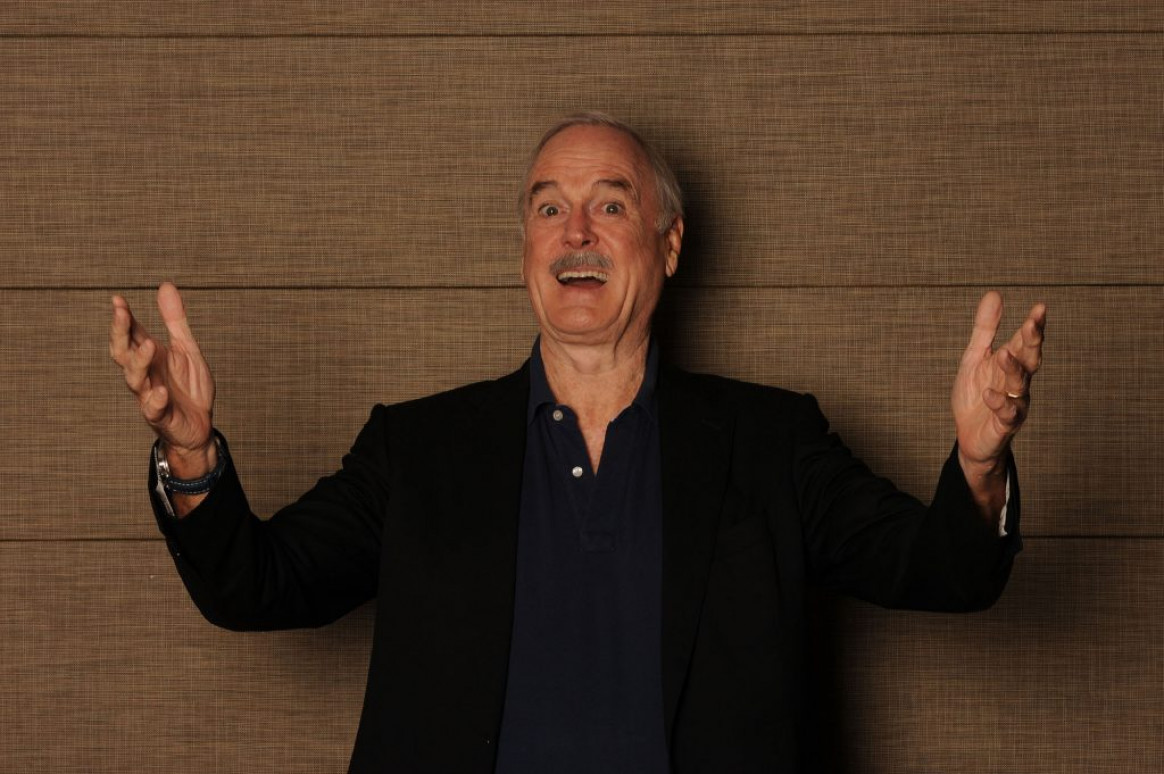 It will come as no surprise to those who are familiar with John Cleese and his distinct brand of wit and lunacy when I tell you that an interview with him isn’t exactly an interview – it’s more like an increasingly funny Monty Python sketch that you’ve suddenly become a part of.

I don’t typically write myself into the interviews that I conduct, but in this case, it was impossible not to because Cleese doesn’t just answer questions – he talks to you directly, by name, and wants to hear your personal take on a subject as much as he wants to make you laugh. As we’re connected by phone to talk about his upcoming appearance at the F.M. Kirby Center in Wilkes-Barre, where he’ll sit on stage for a Q&A with local fans after a screening of “Monty Python and the Holy Grail” on Saturday, Jan. 28, he doesn’t even let his own publicity coordinator off the hook, busting her chops as she introduces him as John Cleese, pronounced with an “S” sound rather than a “Z” sound.

“It’s not John Cleese, of course, silly woman, it’s John Cleeeeeze. It rhymes with cheese. You don’t go into a shop and say, ‘Can I have some cheddar cheese?’ do you?” he began.

Then he moved on to me, opening with an anecdote about my name, Rich.

“I have a [personal assistant] called Rich. I really do. His name is Rich Norris and he comes from a long line of minor British aristocrats, and if I tell you that under Henry VIII, his ancestor, Richard’s ancestor was called Master of the Stool. You may be able to guess what particular favor he did for Henry VIII,” Cleese explained. 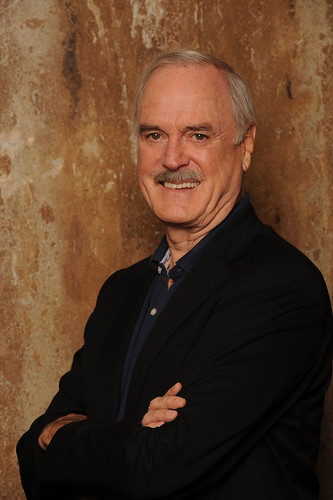 “That sounds like a few jobs I’ve had,” I replied, sending him into a fit of laughter, the kind of high-pitched belly laugh that only this man is capable of.

“Quite right!” he said in between giggles.

I have to admit that making him chuckle – a comedian, actor, and writer who I’ve watched and admired my entire life in episodes of the groundbreaking British sketch show “Monty Python’s Flying Circus” and BBC sitcom “Fawlty Towers,” multiple viewings of the four Python films, and movies ranging from hit comedy “A Fish Called Wanda” to James Bond flick “Die Another Day” – was an honor that made me want to end things right there, as the conversation couldn’t possibly get any better. But it does, of course.

Now that he has set the tone, mixing his extensive knowledge of history with irresistible scatological humor, I figure that it’s safe to make another joke, so I congratulate him on surviving 2016, as many other beloved celebrities didn’t make it out alive despite being much younger – he turned 77 on Oct. 27, which I know because we share a birthday.

“My wife had a theory that the queen actually had died because she’s had a very bad cold and that they were putting out pictures of her body double to try and persuade people that she was still alive. And then my wife caught the same bug that the queen had had, so I thought that she was going to die. I thought maybe I’m going to get it from her and not make it past Dec. 31, but I did, and I’m still here. I am still here at the age of 77. 77, Rich! I’m nearly dead!” he noted, his voice getting higher and more dramatic.

“What am I going to do about it? What do I do? I’m dying as we speak! I have little time left and here I am doing radio interviews in a town that nobody knows how to pronounce! What am I doing? I could have done something reasonable with my life, Rich! Help me! I’m going to go kill myself. I’m going to throw myself out of a window!” he continues, pretending to sob and then laughing a hearty laugh again.

“I’m sorry; I’m having a bad day. I’m being very silly Rich, I’m sorry.” Like he needs to apologize, being the man best known for acting silly his entire career – not to mention serving in the Ministry of Silly Walks. “But I’ll be very good from now on. I promise I’ll be obedient and do everything you tell me.”

I know that’s a promise he can’t keep, but I move on to where I was going with this. Famously, when Monty Python member Graham Chapman died of cancer in 1989, he delivered an irreverent eulogy that was as hilarious as it was fitting to remember a brilliant comedian who also enjoyed pushing boundaries, becoming, as he put it at the time, “the first person ever at a British memorial service to say ‘fuck.’” That’s why I have to ask who he wants to memorialize him at his own funeral.

“I’m going to do my own eulogy because I’m going to prerecord it. I want to make sure people understand what an extraordinary person I am, and I feel that if I left it to someone else, particularly [fellow Python Michael] Palin, they’d screw it up!” he cracked.

“Modern technology has its advantages.”

It’s clear that he will be remembered as a legend, an icon…

“I am a national treasure! Don’t forget national treasure, please,” he insisted. “I am all these things. I am an extraordinary and very, very remarkable human being, and very warm-hearted, too.”

“And humble. This is a very humbling moment, as you say or as I say very, very sincere and impressive things about myself. And I’m coming to Wilkes…something or other. What is it?”

“Wilkes-Barre,” I said, seeing this quickly turn into a comedy routine.

“Yes, like a grizzly bear, though some people also say, ‘Wilkes-Berry.’” I’ve heard both pronunciations from locals over the years, and while the latter is more historically correct, going back to politician Isaac Barré, it wouldn’t be the first time that Americans have butchered a foreign name.

“Well, what are you doing living together if you don’t even know the name of the place you’re living in? And I’m coming here to amuse you. Why don’t you sort it out before I arrive?”

“Good idea! That is a brilliant idea! On the night that I’m interviewed, we’ll have a vote about how we pronounce the name of your town and it will be binding until my next visit.”

Oh yes, that’s right – we should be discussing what he’ll be doing at the Kirby Center. I haven’t quite mastered how to ask him a proper interview question yet, so I put it to Cleese – what kinds of questions does he want – and not want – to hear from the audience?

“Well, the worst ones are the ones that say what a wonderful person I am and how it means so much to them to be there speaking to me – people who pay tribute. That’s what makes me throw up, and the rest of the audience does not want to hear this. It’s very, very boring. So I like it when people say, ‘Why can’t you stay married?’ or ‘You haven’t you been funny for 40 years.’ These kinds of things lead to interesting banter,” he explained. 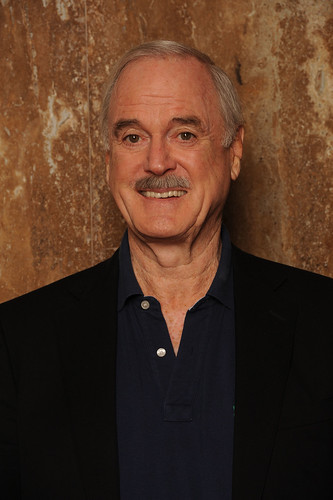 “I really don’t mind what we talk about. I really don’t. I was in some strange place… God, was it Akron? Have you ever heard of Akron? It’s near Columbus. We had a wonderful time, and at the end, we hardly talked about the ‘Holy Grail.’ I said to all the audience afterwards, ‘We hardly talked about the ‘Holy Grail,’’ and they said, ‘We’ve just seen the Holy Grail! We were more interested in other things,’ including your president-elect because there’s a subject. What an extraordinary business this is, Rich. What do you make of it?”

“Of Donald Trump?” I asked, knowing that we both agreed on the Cheeto-in-Chief’s ineptitude but unsure of where to begin.

“Yes, of having a man who is out of touch with any kind of reality? You do realize you haven’t made him mayor of Wilkes-Barre or something, you know what I mean? You’ve made him the most powerful man in the world!” he pointed out, “you” referring, of course, to my crazy country as a whole and certainly not me. I wouldn’t have voted for him if I was a Russian Republican billionaire with stock in tanning beds.

“I don’t know why I’m supposed to be a comedian anymore!” he exclaimed.

As much as I hated to admit it, I informed him that Wilkes-Barre is actually part of the reason that Pennsylvania swung toward Trump in the election, securing his win.

“Really?!” he responded, already conjuring up a joke. “Have there been a lot of Russian tourists in Wilkes-Barre the last few weeks?”

“You know, now that you mention it, there have been some strange accents around here lately…”

“Yes, I think there’s your answer. But I have met three people who were for Trump. Mind you, I’ve only been here for about six weeks or so, but I met three of them,” he snickered again almost uncontrollably. “We’re going to talk about this when we get to Wilkes-Barre, see if we can get somebody to stand up in the audience who actually owns up to being a Trump supporter. How do they dress?”

If I was as witty as Cleese, I would have said like heroin addicts, considering the city’s well-publicized drug problem, but I sadly wasn’t as quick.

“They blend in pretty well, surprisingly,” I replied.

“Yes, what do they call it? Locker room banter,” he recalled dismissively. “I used to play sports and games and I never heard locker room banter like that, but maybe it’s different in America.”

It was then that his publicist, now much more aware of how to properly pronounce Cleese, had to cut the political commentary short. He teasingly called her an “interfering old witch,” giving me one last guffaw before this weekend, when further laughter and repartee will be encouraged.

“All right, Rich and witch, bye-bye!” he quipped as he hung up.

Did that just happen? Did I really just share a few ridiculous moments with John Cleese? You can too this Saturday. After all, he’s not dead yet.