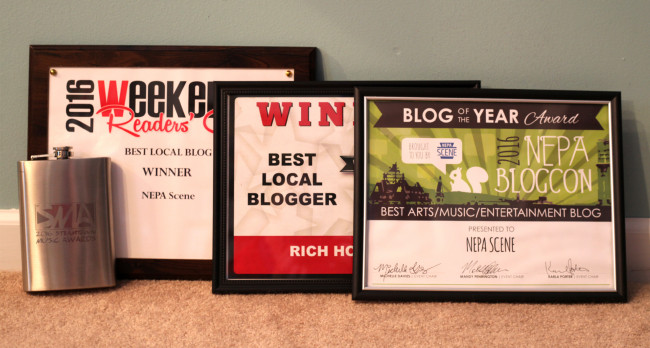 NEPA Scene, the only independent publication covering all arts and entertainment in Northeastern Pennsylvania, took home six awards from four different organizations in 2016, showing its continual growth and impact on local culture in the website’s second year of operation.

In four different polls this past year, NEPA Scene and its staff were named the “Best Music, Arts, or Entertainment Blog” in the NEPA Blog of the Year Awards at NEPA BlogCon; “Local Music Publication of the Year” and “Music Photographer of the Year” (Keith Perks) in the Steamtown Music Awards; “Best Local Blog” in the Weekender Readers’ Choice Awards; and the “Best Local Blogger” (Rich Howells) and “Best Local Visual Artist” (Keith Perks) in the Electric City Best of 2015 Readers’ Poll, which was awarded in early 2016.

Each public poll was decided online by readers who are choosing NEPA Scene as the leading local arts publication they trust and enjoy in increasing numbers every day. These wins mark an exceptional achievement for indie media in an area largely dominated by big news companies and major corporations for generations.

“From the beginning, NEPA Scene has been a passion project started by people who love the arts and their craft, receiving no compensation for their work other than the satisfaction and creative freedom that comes with delivering quality writing, photography, videos, podcasts, and other media that the public searches for every day online. Those readers have responded in kind by supporting us in vast numbers every time we’re eligible for an award. It’s humbling, and I’m very thankful that our audience recognizes us as unique leaders in our field,” NEPA Scene founder and editor Rich Howells said.

Despite operating independently with no corporate backers and a largely volunteer staff with a small budget, the Scranton-based blog/magazine also continued its innovative and popular live events in 2016, giving away $2,100 cash and over $3,000 in prizes to local musicians and comedians through NEPA Scene’s Got Talent, an open mic and talent competition at Thirst T’s Bar & Grill in Olyphant that has brought different factions of the local arts community together and left a lasting impression on the scene and the lives of the many individuals who participated over the past two years.

“Artists are often asked to do so much for free, so we did something unheard of in local media and rewarded them with more than just publicity, giving free cash and valuable prizes like recording studio time away,” Howells noted.

“While I’m pleased with those numbers, I’m even more proud of all the great feedback I’ve received from artists who said we’ve helped them develop their skills and book gigs, inspired them to create new events, and brought people together who may never have met otherwise, resulting in shows mixing genres and talents unlike anything we’ve seen before in the area. Those are the real prizes.”

Officially launched in September of 2014, NEPA Scene has received 12 awards and given away $5,000 in cash and over $4,500 in prizes in total to local artists to date. New events and partnerships are being planned for 2017, though no official announcements have been made yet. 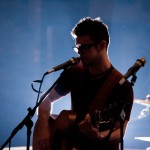