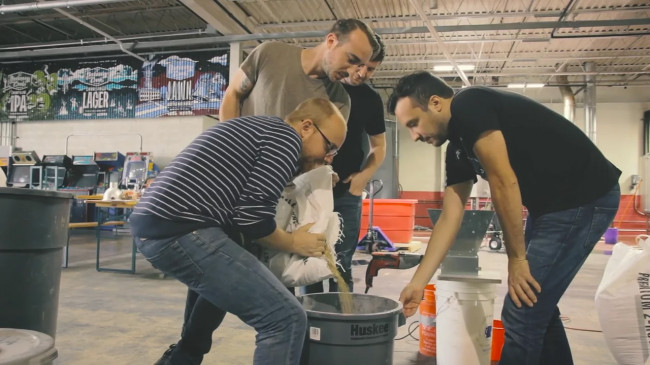 What better way to celebrate the release of a new album called “After the Party” than with some beers?

On Friday, Feb. 3, the day their fifth studio album comes out through Epitaph Records, Scranton punk band The Menzingers have already sold out the record release show with singer/songwriter Roger Harvey at Kung Fu Necktie in their current home of Philadelphia. That night, they’ll also celebrate the release of their new collaboration beer with Neshaminy Creek Brewing Company in Croydon, appropriately named After the Party.

The “crushable” 4 percent ABV beer, which is an Irish-style dry stout brewed with English maris otter malt that is conditioned on ReAnimator coffee (who The Menzingers also collaborated with on own blend), will be available on tap for the first time at Kung Fu Necktie (1250 N. Front St., Philadelphia), and can cases will be available in stores and distributors after that on Feb. 6.

This will be the band’s second collaboration with Neshaminy Creek Brewing – the first was an Imperial American Kölsch-style ale simply called Menzinger released back in 2015:

Local fans who didn’t get tickets to this event can still celebrate at a free record release show at the Gallery of Sound in Wilkes-Barre the very next day on Saturday, Feb. 4, which includes a meet and greet with the group. Additionally, the album can still be pre-ordered in various bundles on Kings Road Merch.

The Menzingers will then embark on a 2017 national tour with Jeff Rosenstock and Rozwell Kid, which stops at Irving Plaza in New York City on March 30 and The Fillmore in Philadelphia on March 31, though the latter date will not include Rosenstock. Tickets for these shows are on sale now, and VIP bundles can be purchased here.