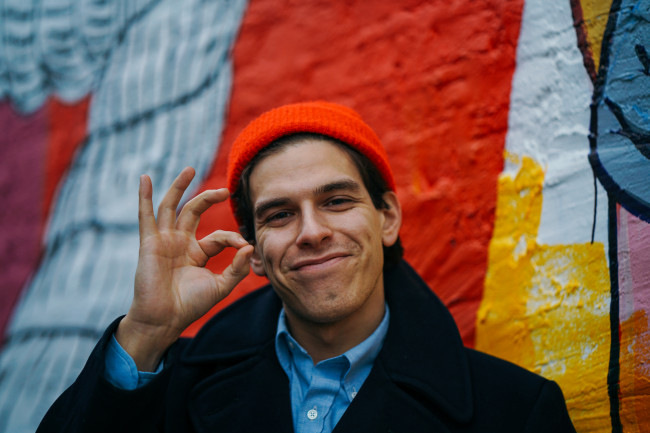 The renaissance man is a rarity these days. Thankfully, some people are still willing to try, one of whom is Boo Baby.

His imminent full-length debut, “Orange You Glad,” grooves like a drive home after work, with lyrics ready to inspire you to start your real job. It tackles the creative process itself – in his words, “I wanted to make something empowering about how being unique is the only thing we have in common. We’re not annoying jokes anymore; we’re new fruits.”

Boo Baby is Scranton native Robert Salazar and, though he currently lives in Chicago, his strong ties to Pennsylvania led him to Philadelphia label Hickory Lane Records. The Keystone State is close to his heart in lyrics like “my soul is a piece of anthracite coal.” Throughout the indie rock record, Boo Baby wrestles with his capacity to create, knowing that it amounts to a magical ability. An actor by trade, his convincing delivery manifests a world where self-expression is key to existence.

“Orange You Glad” is out digitally on Saturday, Jan. 21 via Hickory Lane Records. Stream two songs from the album, “Row of Roses” and “Little Life,” and watch the weirdly funny music video for “Row of Roses” below:

Local music fans may know Salazar as the drummer for former Scranton indie/alternative rock band Awkward Silence, who broke up in 2010 and reunited for one night only at the 2015 Electric City Music Conference. Attendees of the inaugural Scranton Fringe Festival in 2015 may also recall his memorably hilarious performance of his original one-man show, “My Billions. Mine.,” at the Radisson Lackawanna Station Hotel: