TURN TO CHANNEL 3: Much like Gizmo, Atari 5200’s ‘Gremlins’ offers more than expected 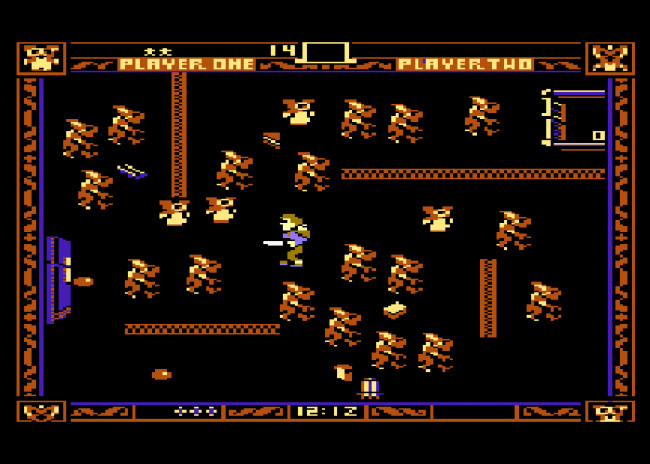 Here at Turn to Channel 3, I’m all about educating our youth, because it has come to my attention that the youngsters of today expect, yes expect, licensed video games based on their favorite television show or movie to not only be great, but super great! Allow me a moment to dust off my spectacles and spin you a tale, young padawans.

You see, back in the olden days of the 1980s and 1990s, one did not know what they were getting when popping in a cartridge featuring box and cart art of their favorites from the silver screen or television. One could only cross their fingers and toes while blowing onto the hair of a Troll doll in hopes that a video game company would do a great justice to the intellectual properties placed in their hands.

Sadly, as was the case with the Atari 2600’s adaptation of “Gremlins,” a box office hit at the time, what we often got was pure garbage. It was a sad day for little Gizmo, but what of this same title on the Atari 5200? Was poor Gizmo left once again on the precipice of impending video game doom? That’s where we’re headed today, friends and gamers, way back to 1984 to see what awaits us in land of Atari and “Gremlins.” Don’t forget to follow the three rules!

Like many games of the time, Gremlins doesn’t feature a whole lot in the aspect of a soundtrack, just little tunes to start the game as well as the dreaded game over tune, with not much else in the sound effects department. While not a strong representation of why the game is better than its Atari 2600 counterpart, it’s nowhere near as annoying as other titles for this and other Atari consoles of the era.

Looking back, I truly feel the better Atari games were those that had masterful programmers and designers who made the game look and feel like whatever message it was trying to convey. When you play “Gremlins” on the Atari 5200, you can tell what you’re looking at, from the vile evil gremlins to the little mogwais you must rescue. The obstacles in front of you are easy to spot, and even the title screen is pretty impressive in its own right. This is the first of two key differences you notice between Atari 2600’s “Gremlins” and its 5200 counterpart.

These days, gamers expect a lot in replay value for whatever game they purchase with their hard-earned money, but during the era of Atari, it truly was about the high score and the increase in difficulty to challenge but not frustrate you to the point where you put the controller down. Make no mistake about it – to most, this is a repetitive game that doesn’t offer you much, but taking a second look, not only do we see a game with purpose and intent (and not just a mess of random ideas), but one that keeps you on your toes.

“Gremlins” on the Atari 5200 tasks you with rescuing mogwais, putting them in your backpack, and taking them to a safe area, a little pen in a corner of each level. While this may seem simple enough, there’s some serious hurdles to overcome, most notably the evil gremlins who can multiply if they touch water, and mogwais that can wander off and eat food, thus turning themselves into evil gremlins. One touch from an enemy and that’s it, you’re a pile of bones, with a sword as your only weapon of choice.

Each level (or night, as the game says) increases with the amount of enemies to start and the amount of mogwais to save. Certain mogwais give you more points than others, and you get a time bonus for how fast you complete each night.

If “Gremlins” suffers from anything in the gameplay category, it would have to be the amount of cheap kills. I don’t necessarily mind it when you’re trying to battle off a bunch of enemies, but sometimes the game puts you smack dab in the middle of a tight spot as soon as you start!

Is “Gremlins” the best game for the Atari 5200? Not even close. However, you have to applaud the fact that developers seemingly knew how terrible the Atari 2600’s version was and decided to utilize the hardware strength of the 5200 in comparison and create a completely different game.

If you don’t expect much other than a quality time-waster that is also a nice homage to the film without being directly tied to the plot, then you’re in for a treat. Right now, this game is about $30 online, and that’s strictly because so few “Gremlins” games were made back then, with even fewer being tolerable by most gamers.

I hope you enjoyed this review. Join me next time as we jump forward to the Atari 7800 and “Food Fight!”

DRINK IT DOWN: Game of Thrones: Winter Is Here Witbier by Brewery Ommegang