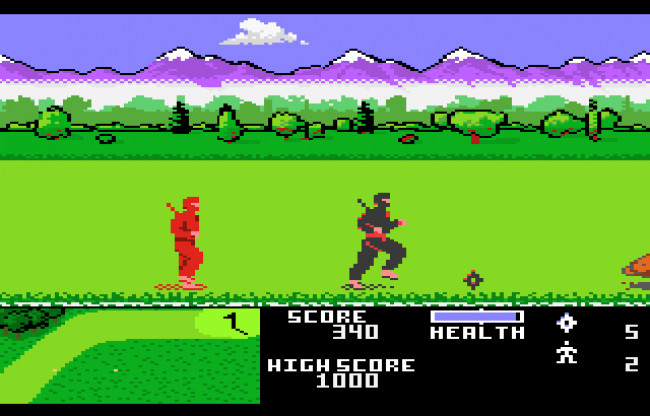 Progress in the gaming industry can only exist by taking an idea that seems absurd, tossing it against the wall, and seeing if it sticks. Some of the greatest gaming franchises of all time were once a simple idea hoping to break the status quo of what gaming was at the time.

In 1986, the Atari 7800 was relaunched after a small market release in 1984. It is this writer’s belief that, like later consoles from Sega, the 7800 was the victim of poor timing and poor marketing. Existing at a time when Nintendo would change the course of gaming after companies like Atari, Coleco, and Mattel left it on its deathbed, the folks behind the 7800 were tasked with coming up with games that were different than what Nintendo game publishers were putting out, and boy did they ever.

Today on Turn to Channel 3, we take a look at one of the last games to be released for the Atari 7800, “Ninja Golf!”

If there’s an overall problem with “Ninja Golf,” a noticeable weakness, it would have to be the lack of variety. It has some little tunes, but not with much punch in comparison to many other games of the time. Keep in mind, this was a game developed in 1990, when soundtracks for “Mega Man,” “The Legend of Zelda,” “Super Mario Bros.,” and so many more were getting tons of attention. All “Ninja Golf” offers are some stereotypical tunes you’d hear in video game deserts, waters infested with sharks, and any place in Asia, according to the folks who composed the music for this game.

The detrimental problem with the Atari 7800 hardware is that, while it was more powerful than its predecessors, it retained the same audio chip as the Atari 2600, a console that was already a decade old once the 7800 was launched again.

Sure, “Ninja Golf” offers exploding enemies, weapons, and the swing of a golf club, but it just isn’t enough to even attempt standing toe-to-toe with some of the greats in gaming, circa 1990.

Graphically, “Ninja Golf” is actually pretty impressive, despite the ever-lacking variety issue we’re going to keep talking about. The enemies look cool, even a bit weird (giant frogs?), but the fact that you’re playing a game called “Ninja Golf” and you can actually tell it is a ninja playing golf is still pretty cool if you ask me.

The game has desert levels, water levels, and a wooded area along with the green you find yourself on at the end of every hole. Can I also say that the dragon you face at the hole is awesome and really showcases the strengths of the console hardware, as well as the developers behind this having a keen eye for detail?

The premise is simple, albeit pretty absurd. You are a ninja that has completed all of your training, except one task. This is, of course, completing nine holes of golf. Only then are you a true ninja. Does this mean all amateur golfers are secretly training to be ninjas?

Anyway, while boring golf matches see the golfer trek from one hole to another, or climb into a cart and drive there, “Ninja Golf” tasks you with surviving that trek to the next hole, taking on various enemies while trying to do well with the golfing aspect too. Oh yeah, and you fight a dragon in front of the hole.

You’re also given a life bar. Complete all nine holes with a good score, don’t die, and you’ll complete your ninja training. Fail and be told, rather bluntly, that you failed and have done a dishonor to yourself and your family. Man, who knew golf was such serious business in 1990s Japan?

Like I said, “Ninja Golf” is a unique game, coveted by some collectors for just being plain weird. It is a repetitious romp that lacks replay value and has a novelty that, while certainly different, won’t keep you busy for long. You don’t alternate levels much, and even when you do, you still end up on the same green, facing off against the same dragon.

Currently, “Ninja Golf” is selling for an absurd $38-$45 online, and let’s not kid ourselves, unless you’re a serious Atari 7800 collector, someone who grew up playing this weird game, or you just enjoy some of the more bizarre titles in gaming, you’d be better off spending your money on other games. Still, you can’t knock developers for trying something new, I guess.

That does it for me this month. I hope you enjoyed this review. Next time, we journey back to some of Sega’s other consoles, from the Sega Master System to the Sega Saturn and the Sega Dreamcast, as we look at some more games and consoles that don’t always get much attention.

Until then, take care, watch out for dragons on the golf course, and remember that there’s never a bad time to game on!