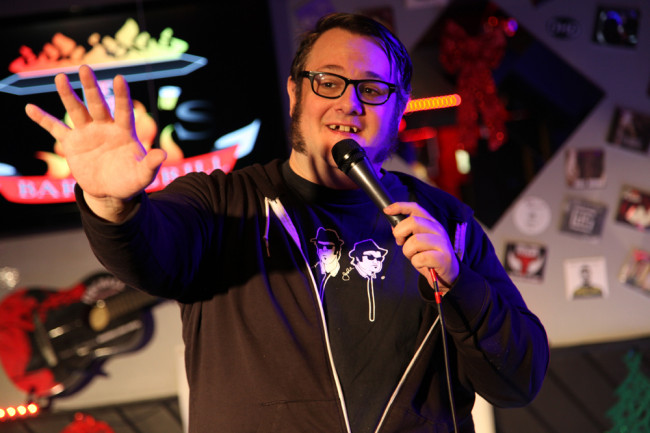 The 2016 presidential election divided the United States down the middle, and now that it’s over, opposing political sides and even friends and family are still at each other’s throats arguing about the results and what’s to come over the next four years. We felt like we needed to break the tension and just have a good laugh, so we challenged five comedians from Northeastern Pennsylvania to come up with some political humor to take everyone down a peg, vent our frustrations, and make us smile about them during Election Fallout Comedy Night on Tuesday, Nov. 29. With very little time to prepare, they succeeded.

The free event, which served as part of our NEPA Scene Live series at Thirst T’s Bar & Grill in Olyphant, featured comedians Ted Hebert, Russell Austin, Erich Drexler, Tyler DiBenedetto, and Elliott Elliott taking aim at Donald Trump, Hillary Clinton, Bernie Sanders, and all their supporters – no one was safe from ridicule. At the end of the night, bartender Joe Farro, who has been known to sling a few jokes here and there, joined in by taking the stage to sum up his feelings on the election and to emphasize something that we all should keep in mind as we move froward.

“It truly comes down to the golden rule – we all need to treat each other better and everything else will take care of itself,” Farro concluded.

As the country prepares to inaugurate President Trump, it seems like the perfect time to post the full sets from each comic, both in video and audio form, for everyone to enjoy.