Nonna Rosalita is a “tiramisu” beer that’s classified as a stout but seems to be more of a brown ale, though any way you look at it, it’s got that delicious coffee dessert flavor! 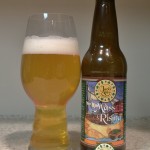