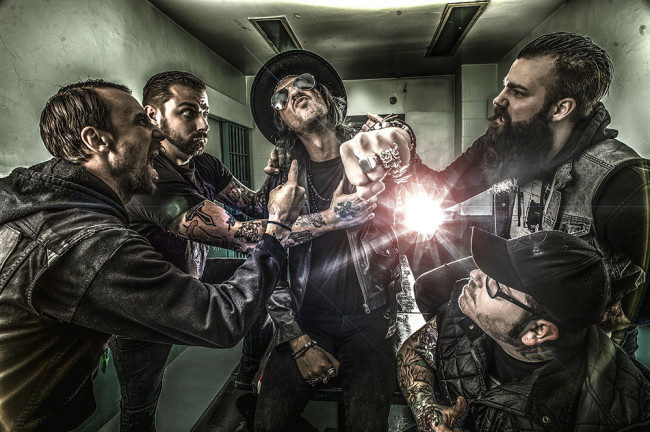 If you’re one of those people who finds rock music too whiny, preachy, or boring these days, American Evil just may be the swift kick in the balls you’ve been looking for.

Right out of the gate, it’s easy to understand what these guys are all about – partying hard and rocking even harder, unapologetically doing it their own way and on their own terms rather than trying to copy the next generic rock band with a radio hit. After a hometown show in Sunbury, this DIY quintet is hitting the road for a nationwide tour, but first, they’ll stop at the Irish Wolf Pub in downtown Scranton for a gig with two local hard rock bands, The Way and Balero, on Friday, Feb. 10 at 9 p.m.

NEPA Scene talked to the band collectively through e-mail to see what kind of evil and excess they’ll unleash this weekend.

NEPA SCENE: How did you decide to call yourselves American Evil?

AMERICAN EVIL: If you listen to the track “Evil Things” on our EP, “SUPERAUTOMATICA,” it’s about giving into temptation. I think that song really sums it up. Being a party band is fun. There’s a lot of good times, but there’s always repercussions for bad behavior. We throw the word “evil” around a lot. We embrace it. And, obviously, we’re American.

NS: How do you define evil?

AE: If I was gonna define the word “evil,” I’d Google search the definition on my phone. But as far as how that word pertains to this band, it’s different. Imagine someone brings a fuckin’ Cheech and Chong-sized joint to one of our shows on tour and wants to smoke it with us. I’d say, “Holy shit! Look at the size of this evil joint!” Or like one of those half gallon-sized Jack Daniels bottles is evil as fuck.

NS: Did Sunbury influence your music at all?

AE: Sunbury is a black hole. When it comes to music, it’s the kind of small town that is 10 years behind the rest of the country. The people of Sunbury don’t give two shits about your big dreams or supporting you, or even art in general, really. They kind of like cover songs a little, but only the really shitty ones. But we don’t play covers, so the fact that we can put 200 people in a bar to see American Evil in Sunbury is a massive accomplishment. It’s so much harder to do in Sunbury than the rest of small town America, so I guess it pushed us harder and even helped us in a sick way. It certainly made the decision to drop our lives and go on tour easier because we wanna get the fuck out of here.

NS: The band talks a lot about partying and unabashedly having a good time with a healthy dose of humor. Why is it important for you guys to be straightforward and fun in your music?

AE: We keep it as real as it gets. We’re fun dudes. We like to have a good time because life is short and we’re musicians who decided to play rock and roll. Why so many bands take themselves so seriously and tiptoe around what they should and shouldn’t say or do is beyond us. More power to bands who connect with people over lost love and heartache, and I commend political bands who fight the good fight, but that ain’t us. We just wanna have the best night of our lives every night and bring everyone along for the ride.

NS: Do you guys party a lot while on the road?

AE: I think that one of the most common misconceptions people have about being in a band is that we get to party nonstop. Don’t get me wrong, we love to party and have a good time when we can, but most of our time is spent preparing for shows and worrying about where we are gonna eat/sleep from one day ’til the next. On the off day when we do get to party, shit always gets wild. 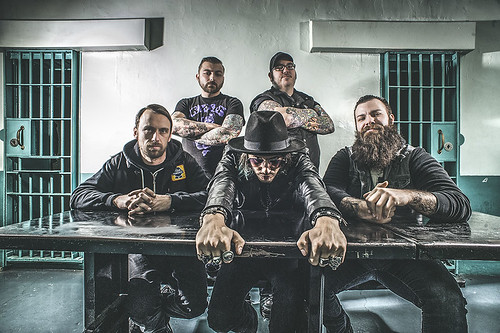 NS: What is one of your craziest stories from a show or an after-party you’ve been to?

AE: This is a tough question! The craziest stories are ones that can’t be remembered or ever spoken of again. My favorite from our summer 2016 was at GroundZero in Spartanburg, South Carolina. We got there way too early. The A/C in the van wasn’t working and it felt like 110 degrees. It was the last date before Florida. Our plan was just to play and get on the road for the long drive ahead. Then, the amazing staff there had other plans for us.

After the show, they decided to get us blackout drunk. Our friends and fellow Pennsylvania band Crobot were there the week prior and received the same treatment. We woke up hungover in a Jacksonville, Florida Walmart parking lot. Our drummer was gone and we had a day off, so we found a hotel and grabbed a pizza for Netflix and chill. Game over.

NS: You just released your new EP, “SUPERAUTOMATICA,” in December. What went into the production of those songs?

AE: We recorded it in Sacramento. Many vices went into the making of “SUPERAUTOMATICA” both in content and execution; caffeine may have been the main one. “SUPERAUTOMATICA” was the name of the espresso machine in the studio, and our producer also doubled as an evil barista. We never worked with a producer before, so it was a killer experience working with Ryan Frost. We even wrote “Get High” right there in the studio during a break from recording. None of the process was rushed or stressful, and there was a medical marijuana dispensary very close by. So as hard hitting and fast as “SUPERAUTOMATICA” sounds, it was recorded in a very “California cool” way.

Also, the nightlife in Sac Town was fun as hell. We loved the bars downtown. We met some great characters. The only shitty part about making the EP was that we drove from Central Pennsylvania to Sacramento and back in a motherfucking Kia Rio. In hindsight, that was a poor decision that none of us would ever make again.

NS: How does this album compare to your previous EP, “We, the Evil?”

AE: “We, The Evil” wasn’t recorded with a producer, and it was made before we had two guitarists in the band. The songs on “We, The Evil” are great songs; we’re all proud of them. We’ve just grown as a band and as musicians and songwriters, so “SUPERAUTOMATICA” is better, as it should be. Everything we put out is gonna get better and better, and it’s because we work as hard as we party. We’re always evolving into something even greater.

NS: Tell us about the shooting of your new music video for “Evil Things.” That seems like it was a blast to make.

AE: So we shot the video over the course of two days with Mike Danger (guitarist for Gas Station Disco). Up until the day of filming, we really didn’t have a clear-cut idea of what we were going to film exactly. We kinda just said screw it and bought a bunch of liquor and filmed whatever came to mind. It was complete chaos and most everything you watch in the video is unscripted.

NS: You’re heading out on a tour that’s going to take you around the country. Have you toured that extensively before?

AE: We toured for a month in the summer of 2016 with California-based band Burn Halo. That was pretty much the first tour experience we’ve had as American Evil, although we have all toured with previous bands. We have a lot of touring already lined up for 2017, which includes a run with Shallow Side from mid-February until April, weekend regional shows throughout April and May, and a stretch from West Coast to East Coast all throughout June. Keep your eyes peeled for those dates!

NS: Have you ever played in Scranton before?

AE: Yes! We actually opened up in [the Scranton area] for the Crobot guys at The Factory, and it was an amazing show. We all hung outside, slamming Little Caesars pizza and slugging das beers. It was a great crowd, Crobot was amazing, and we had a “cloud nine” kind of night. You know… a great crowd, great friends, great bands, great party… just a killer night.

NS: What are you most looking forward to about this show?

AE: We really just love playing new places and seeing new people. I never understood how some bands are content playing the same bar/venue week in and week out. That shit is just boring. Playing in front of new people and watching their reaction to our live show is a rush.

NS: After this tour, what are your plans for the rest of the year and into the future?

NS: Good to hear! Is there anything else you’d like to mention?

AE: Yes! Go check out our website and Facebook page! You can also get our music on iTunes and Spotify.