TURN TO CHANNEL 3: ‘Nights into Dreams’ imagined an inventive new world on the Sega Saturn 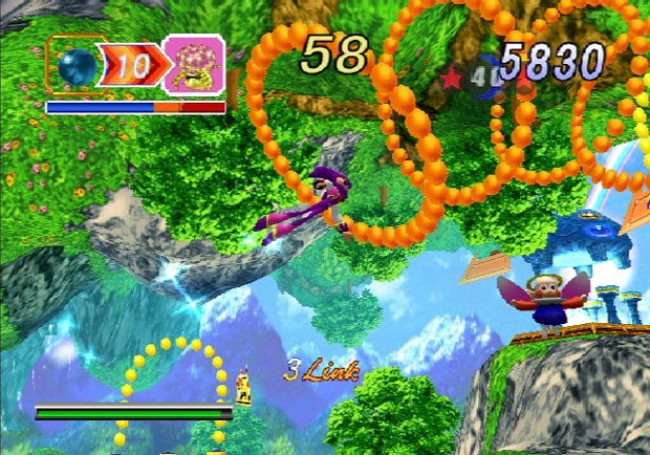 The year is 1996 and the Saturn, Sega’s latest console following the Sega CD, is on the ropes from the upstart Sony PlayStation, which is bringing a hip new vibe to gaming while ushering in many adult gamers in a way other companies couldn’t do at the time. Without a “Sonic the Hedgehog” game to lead the charge, things looked bleak for the console. Behind the scenes, the Sonic team was already hard at work on a “secret project” that would become our topic on today’s Turn to Channel 3 – “Nights into Dreams!”

“Nights into Dreams” sports one of the best soundtracks on the entire Sega Saturn, with music that suits the mystical, magical, ethereal vibes experienced throughout. You could tell that the composers behind it knew this was a totally different game and, thus, it needed a unique soundtrack that played like a cross between relaxing, tranquil tunes and those more intense and adrenaline-pumping moments that left gamers happy to be playing “Nights into Dreams.”

Sound effects include the whoosh of flight, bouncing around, and the collection of rings and blue chips, which just further add to the mystique of the game. If you’re going to make a game that’s unlike anything on the market, it begins with a superb soundtrack to set the stage for your desired message to gamers. In this case, “Nights into Dreams” is about fun, and you feel that just by listening to the soundtrack.

While the Saturn was limited graphically in the realm of 3D, causing some blocky objects and pixilation issues, there is 3D eye candy to behold, bordering on breathtaking, despite this being a game played on a 2D plane. The animation is so fluid, and the shifting camera angles are truly a sight to behold. Just looking at the name, “Nights into Dreams,” you’re expecting to be transported into a dream world, one of varying environments of wonder, and you get that.

We like to stare in wonderment at the graphics we expect in today’s gaming world, but over two decades ago, “Nights into Dreams” tested the waters and did so with graphics that made us stand up and take notice despite the limitations the Saturn presented graphically.

At first glance, “Nights into Dreams” may appear to be boring as far as the actual completion of a level is concerned. Players flying through the air are challenged with depositing blue chips into a globe-like creature, causing it to explode. Bosses change things up a bit, but you’re not faced with as much attacking as you are using aspects of your surrounding scenery and strategy to defeat them, and they are an eclectic variety to be sure.

Completing a level in “Nights into Dreams” isn’t too difficult. However, completing one with a good grade is. Boss confrontations are bizarre but innovative, which ties into another aspect of this game as a whole – innovation. “Nights into Dreams” is best played with a Saturn 3D controller, which looks similar to a Dreamcast controller, except it is black. This helps ease you into the “rolling” motions you have to do with the directional pad. Did any games in 1996 have recommended controllers? I can’t think of many.

Sadly, this game did not change the fate of the struggling Sega Saturn, which was plagued from the start with poor marketing strategies and timing from Sega that it never recovered from, making the Sega Saturn a commercial failure in comparison to its rival, the Sony PlayStation.

All of that aside, you have to applaud the developers behind this game for taking a huge negative in the failure to release a “Sonic the Hedgehog” game for the console and turning it into something positive. This changed the landscape of gaming in some aspects because, in 1996, games like “Nights into Dreams” just didn’t exist. The majority of the 1990s was about strict linear platform titles and, of course, fighting games. Along comes “Nights into Dreams” to mix things up and, even now, gamers, especially those who collect for the nearly forgotten console, still fondly regard it 20+ years later.

A set of “Nights into Dreams” and the Saturn 3D controller will run you about $70, which seems like a lot, but the experience you get from playing this game just may be worth the price.

Well, that’s another review in the books as we finish up the month of February by heading over to Sega’s last appearance in the console market, the Sega Dreamcast, and the shooter game “Cannon Spike!”

Until then, remember, the best thing to do on any snow day is to, of course, game on!