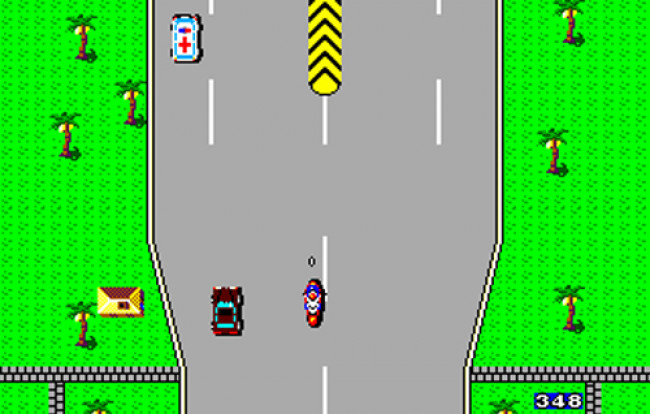 In the 1990s era of gaming, you were either a Sega fan or a Nintendo fan. There really wasn’t much in between, and that war raged on for years, but you know something? While other Nintendo consoles were given proper respect and admiration, some of Sega’s other consoles outside of the Genesis are still rather unknown to new and even some retro gamers.

This month, we’re changing that by taking a look at three Sega consoles, some more forgotten than others, and some games you can play on them. Today, we begin with “Action Fighter” on the Sega Master System!

Now, before anyone can ask, the abridged version of what the Sega Master System is that it’s the predecessor to the Sega Genesis. However, whereas the Genesis garnered worldwide appeal, its older brother just couldn’t shake Nintendo’s vice grip on North America and, of course, Japan, while standing toe-to-toe with it in Europe and seemingly blowing it out of the water in South America. Despite this, today, the Master System is brought up in conversation as almost a myth, or something people only read about, but have never actually seen up close.

“Action Fighter,” obviously, possesses some stellar action-packed sound effects, including exploding enemies, missile fire, and the roar of your jets as you take to the skies. However, in stark contrast, it also possesses a catchy, yet highly repetitive looping soundtrack that can get annoying real quick if you don’t train your ears to somehow listen more to the action. It’s a real shame, too, because a killer soundtrack could have only taken the action to a whole new level of fun.

While you don’t get high detail, the colors used to create the levels, enemies, and the vehicles you use are all bright, vibrant, and pretty impressive for an over 30-year-old game. The intermission screens are pretty cool, too, and help keep the game rolling along. Sega definitely had the ability to utilize what they had graphically to stand up to Nintendo, and this is a nice early example of how well Sega ported arcade titles to their home consoles.

To many, “Action Fighter” may seem like a “Spy Hunter” clone of sorts, but that truly isn’t doing the game justice. For starters, you start off on a motorcycle, staying as close to the top of the screen as you can, passing cars, blowing them up (yes, even ambulances) to rack up points, while getting power-ups from a Sega truck and collecting letters to go from a motorcycle to a car, and then adding jets to the car to make it fly! In addition, when you become a jet car, the game changes, going from a “Spy Hunter”-style game to more of an “Xevious” vertical shoot ‘em up, which means you get two awesome games in one, right?

Well, the major downfall in the gameplay area is the fact that, if you hit a guardrail, that’s it, you’re done. In a game that has many branching roadways that then narrow back again, it is very easy to crash, and while crashing with a simple peashooter weapon is one thing, nothing is more frustrating than to have a weapon upgrade, only to slam into a guardrail seconds later. The controls are pretty touchy, too, so it’s a bit of a recipe for disaster.

Lastly, “Action Fighter” seems to tally points in a way that doesn’t truly reflect the effort you put into it. Even if you read the instruction manual, you’re still stumped as to how you got that score after busting your butt in the game.

“Action Fighter” is a game that, with some fine-tuning, could have been a terrific game. In 1986, companies were still hard at work trying to bring the arcade experience to homes. In doing so, they wanted to get games with concepts that were both fun and easy to grasp into as many hands as possible. “Action Fighter” definitely showcases that but, in a way, it leaves you wishing you got two games in one without the “Contra” insta-death issue. In short, “Action Fighter” is great, but not as well-rounded as it could have been.

That does it for me. Next week, we continue with the Sega Master System, where we’ll take to the high seas with “Captain Silver!”

Until then, keep warm and, as always, make time to do as I do and game on!