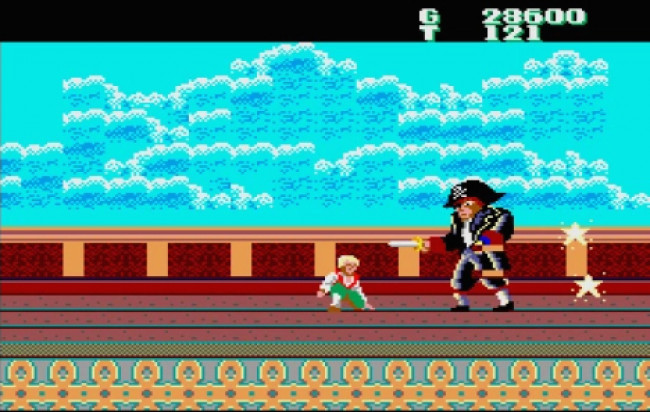 Here on Turn to Channel 3, nothing is more satisfying than learning something new about a retro game. As I said last week, we’re looking at other Sega consoles that just didn’t seem to have the backing that the Sega Genesis did during its glory days. I began with “Action Fighter” on the Master System and, this week, we continue on that console with a game starring a pirate that entered our television sets long before Jack Sparrow made pirates cool.

Today, me mateys, we tell the tale of “Captain Silver” on the Master System! Argh!

“Captain Silver” doesn’t possess a large musical soundtrack, but what’s there is pretty good for a game that debuted at a time when hit after hit was coming out from developers. In 1988, Nintendo and all involved developers were seemingly cranking out great game after great game and, with it, some stellar soundtracks. “Captain Silver” has a soundtrack that definitely casts some foreshadowing onto later Genesis titles like “Shining Force II” and “Beyond Oasis” with some similar-sounding tunes. The best soundtracks are those that fit the theme and message of the game, and while initial stages used the same theme, I never found myself getting bored or annoyed with it, and later stages had some ominous and tense tones to showcase the increase in difficulty and that feeling you get as a gamer knowing the end of the game is near.

The sound effects in “Captain Silver” are a mixed bag, but the only one that truly grated my nerves was the high-pitched pinging sound when you hit mini or end of level bosses that I suppose is steel hitting steel? I’m not sure, but this pinging becomes more frequent (and thus more annoying) the closer you get to a boss with your weapons. I wouldn’t consider it a deal breaker by any means, but you wonder why, at a time when there was still a decent amount of choices for sound effects, this one was chosen. Other than that, using your weapons and taking down enemies sounds pretty sweet.

The hero in “Captain Silver” is not a captain, nor does he possess Silver anywhere in his name at all. Young sailor Jim Aykroyd sets out on a journey to find the lost treasure of Captain Silver. While the game isn’t super detailed graphically, Jim looks pretty great, and each boss is distinct, although some are a bit strange, like a later boss that looks like a banana man. I wish I were kidding. The enemies are a mixed bag, too, as the typical swashbucklers you’d expect look great, but there are also giant teddy bears that were supposed to be werewolves, green pumpkins, and cats that look a lot like the Cheshire Cat from “Alice in Wonderland.”

The levels are pretty well-designed, with some truly capturing the spirit of the high seas, but the best part is how well they transition from one to another. You feel like you’re on an adventure with Jim, not just plodding along from one random level to another. I think it’s little things like this that make a big difference in “Captain Silver” standing out a bit from the pack of Master System games.

If there’s one problem that’s worth mentioning it’s that developers gave us in the West a watered-down or neutered version of “Captain Silver,” all to save space within a cartridge, i.e., to save themselves some money. Even in 1988, this is pretty insulting to gamers who were backing this horse in the race for home console supremacy. I can’t imagine what this must of have felt like for people who discovered this years later.

However, the Master System is region free, which means if you can track down a European version of “Captain Silver,” you can play it on your North American console. Why is this a big deal, you ask? Well, if you’re simply omitting a tune or a meaningless point that doesn’t change the feel of the game to save space and money, that’s fine, but cutting out entire levels and bosses while making the game less challenging is an entirely different story!

“Captain Silver,” either way you play it, tasks you with taking down enemies, collecting coins and treasure to use for items, and spelling out CAPTAIN SILVER in letters obtained during the action in order to get a free life.

Neither version of “Captain Silver” is an exceedingly long game, but there’s just enough there to keep you entertained for a time with something different. Believe it or not, good pirate games are hard to find in the world of retro and, despite some flaws, this still delivers a swashbuckling good time.

“Captain Silver” is fairly inexpensive, retailing at $15-$20 depending on whether you want a loose copy or one with its case and manual. I also think, if you’re serious about collecting for the Master System, this is a pretty good place to start.

Thanks for joining me on deck for this review. Next time, we switch gears to the Sega Saturn and a game that helped sell many of these consoles early on – “Nights into Dreams!”

Until then, there’s few things better to give to that special someone on Valentine’s Day than a video game, along with some time together to game on!