Living and working in Los Angeles, it’s not often that comedian Ron Babcock gets to return home to Scranton to perform. Luckily, you’ll be able to listen to him any time when his debut comedy album is released this Thursday, March 30 through Austin, Texas-based indie label Sure Thing Records.

The University of Scranton grad has been teasing the new album for months, releasing fake album covers with terrible titles like “Me Love You Ron Time” and “Ronfully Accused” that continued to get “rejected” by the label as a clever way to build hype and engage comedy lovers in a fun way. The actual album, titled “This Guy,” features Babcock with all thumbs pointing at him. 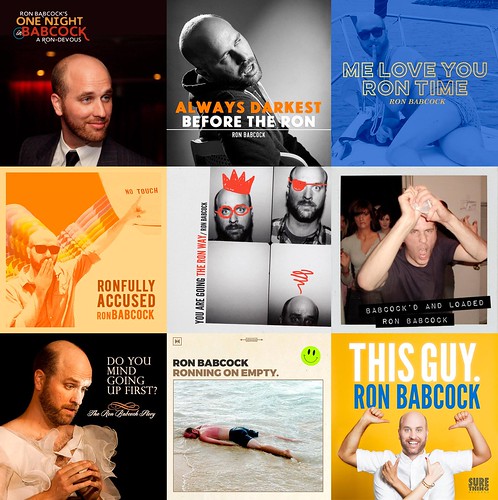 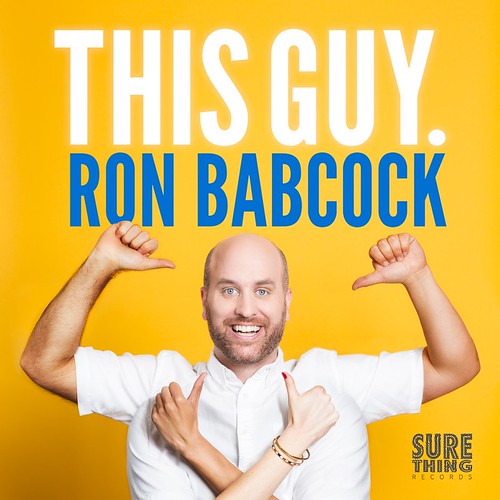 Over the years, Babcock has appeared on “Adam Devine’s House Party” on Comedy Central, “Last Comic Standing” on NBC, “The Life and Times of Tim” on HBO, and “The Rotten Tomatoes Show” on Current TV. Named one of the New Faces of Comedy at Montreal’s Just for Laughs Festival in 2012, he has performed at other big comedy festivals like Bridgetown, RIOTLA, Montana’s Big Sky, and San Francisco Sketch Fest, as well as the Edinburgh Fringe.

While he shines on stage, Babcock has also written and starred in some hilarious skits online, even landing on the front page of comedy video website Funny or Die. One of his latest is a cooking show parody to promote “This Guy,” showing all the crazy ingredients that go into the recipe for a successful album.

He has also put out some teasers in the style of lyric videos that mention some of the topics on the album, including great names and Netflix:

A press release from Sure Thing Records provides further details about “This Guy,” which will be available starting March 30 on all major digital retailers, including iTunes, and the label’s online store for $10:

Babcock’s album is titled “This Guy” and was recorded across multiple sold-out shows in San Antonio and Austin, Texas in the fall of 2016. By turns exaggerated, aggrandizing, and sublimely silly, this nearly hour-long set bounces along with the enthusiastic verve of a seasoned professional who can credibly (if cheekily) refer to himself as simply “Comedy’s Ron Babcock.”

Since the label’s founding in 2014, Sure Thing Records has seen albums placed on year-end best lists from publications, including Splitsider, Thrillist, and earned glowing reviews from high-circulation outlets, including The AV Club, Paste, The Austin Chronicle, and The Austin American Statesman.

The LAist once called Babcock “a singular stand-up force to be reckoned with,” and other big fans of his work include actor Josh McDermitt, who plays Eugene Porter on AMC’s “The Walking Dead,” according to the release:

“Ron Babcock used to open for me. Never again. Incredibly disrespectful for the feature act to be better than the headliner. Asshole.”
– Kyle Kinane, comedian

“I’ve been a fan of Ron’s for nearly a decade and a friend of Ron’s almost as long. It’s about damn time that Ron Babcock had a comedy album! For fuck’s sake!”
– Nikki Glaser, comedian

“Listening to Ron’s set is like stepping into the Matrix. He calls all his shots and sinks every last ball. His first comedy album sounds like it should be his 20th. It’s an absolute pleasure to have had Ron sink his balls into my ears.”
– Maddox, New York Times bestselling author of “The Alphabet of Manliness”

“When people ask me who my favorite comedians are, I always say Ron Babcock. He is my funniest friend. I always look up to him as a comedian.”
– Josh McDermitt, “Eugene Porter” on AMC’s The Walking Dead

“Ron Babcock tells it like it is, and it is charmingly awkward and perfect.”
– Jamie Flam, former booker of the Hollywood Improv

“Ron Babcock is a master at exposing the frailty of that easily threatened species, the modern American male. He’s also wickedly, viciously, dangerously funny. One joke caught me so off guard, I barked with laughter so hard that I coughed and farted at the same time. That’s the highest praise you can give a comic.”
– Mishka Shubaly, bestselling author and songwriter

Even with all this praise, if his comedy career doesn’t take off, maybe the Food Network will pick up “Babcooking with Babcock.” Who wouldn’t watch that beautiful mess?

See photos of Babcock performing as a special guest at the NEPA Scene’s Got Talent Finals Showcase last year here.