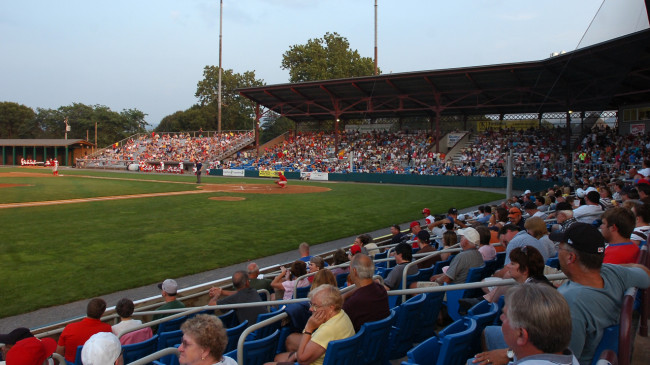 MLB and the MLBPA will host the “MLB Little League Classic,” in which the Pirates will be the home team, at the renovated BB&T Ballpark at Historic Bowman Field, the home of the Class-A Williamsport Crosscutters of the NY-Penn League.

To start the day, Major Leaguers will attend Little League World Series games as a unified demonstration of their passion and commitment to helping grow the game at the youth level. This day-long baseball celebration culminates later that night, when the Pirates and Cardinals host Little Leaguers and their families at the MLB Little League Classic.

“Major League Baseball’s greatest responsibility is to ensure that today’s youth become active participants in our game as players and fans,” MLB Commissioner Rob Manfred said in a statement.

The Aug. 20 game falls at the end of a four-game series between the Pirates and Cardinals. The first three games will be played at PNC Park. The Pirates will serve as the home team in Williamsport, which is situated approximately 165 miles northeast of Pittsburgh.

“We could not be more excited to play in Williamsport in front of thousands of enthusiastic Little League players and their families,” Pirates chairman Bob Nutting said.

“It is sure to be a rewarding experience for our players and staff, and I am sure it will bring back many fond memories of playing youth baseball. This game speaks to the commissioner’s commitment to the growth of the game and our collective outreach to the next generation of baseball players and fans.”

“This is a wonderful opportunity for both of our teams and the game of baseball to showcase the way baseball links generations,” added Bill DeWitt Jr., chairman and chief executive officer of the Cardinals.

“Our national pastime is something that brings families together, and this game in Williamsport is a great way to showcase that for baseball fans all across our country.”

The Little League Baseball World Series is an international championship tournament for children ages 10-12 held annually in Williamsport, the headquarters for Little League International. Each year, countries from around the world compete on a global stage with games airing on ESPN and streamed via WatchESPN.

“We’re proud to collaborate with two of our longstanding partners – MLB and Little League International – on what will truly be a celebration of baseball at all levels,” Julie Sobieski, ESPN vice president of league sports programming, said.

“We’re also excited to continue our trend of producing baseball in innovative ways at special and unique locations. Between the MLB Little League Classic on Sunday Night Baseball and our Little League World Series coverage from Williamsport, it’s shaping up to be an unforgettable August on ESPN.”

BB&T Ballpark at Historic Bowman Field, which opened in 1926, is the second oldest Minor League ballpark in the United States. More than 560 Major Leaguers, including Hall of Famers Nolan Ryan, Bill Mazeroski, Jim Rice, and Jim Bunning, have worn a professional baseball uniform for Williamsport.

Major League Baseball and the Players Association continue to commit resources to growing the games of baseball and softball, on both the grassroots and developmental levels. In particular, MLB and the MLBPA jointly support a variety of programs through the MLB-MLBPA Youth Development Foundation, including the Elite Development Invitational. Through the Major League Baseball Players Trust, the charitable arm of the MLBPA, players are dedicated to providing baseball and baseball-related experiences to underserved youth, special needs youth, and the children of veterans and active military personnel.

The Play Ball initiative, which is supported by both USA Baseball and USA Softball, is MLB’s collective effort to encourage young people and communities to participate in baseball- or softball-related activities, including formal leagues, events, and casual forms of play. Play Ball events have become MLB’s signature youth engagement activity during the professional and amateur baseball and softball calendar, including key dates throughout the MLB offseason and into the World Series. MLB and all 30 Clubs have committed $40 million of resources toward the growth and sustainability of the Reviving Baseball in Inner Cities program. Additionally, MLB supports developmental initiatives aimed at engaging underserved communities, particularly MLB Youth Academies and amateur development camps, such as the Dream Series and the Breakthrough Series.

This event follows the successful Fort Bragg Game in 2016, the first regular season game of a professional sport ever played on an active military base.