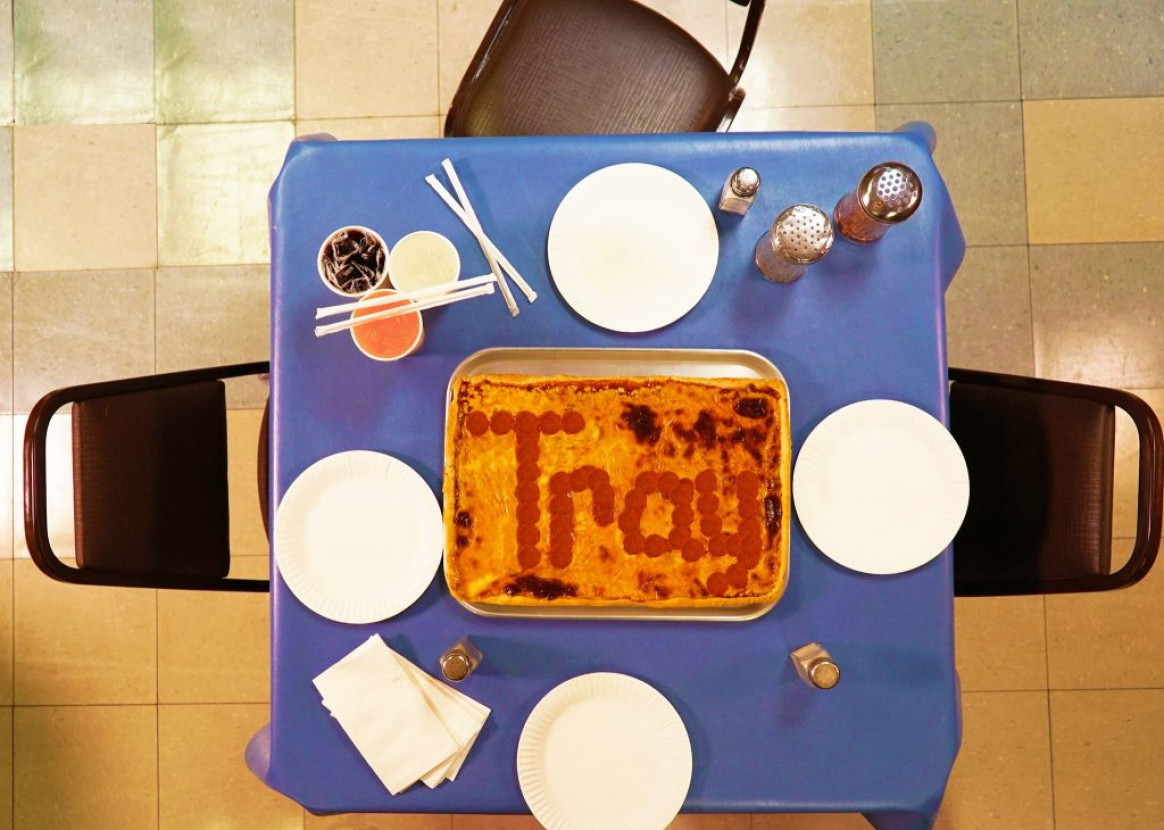 NEPA Scene was the first media source in Northeastern Pennsylvania to report on “Tray,” the upcoming documentary on the unique pizza that comes from NEPA and how it ties into the area’s residents and their heritage, a little over a year ago. Since then, we’ve stayed in touch with the local filmmakers to provide updates and, like most residents, have become anxious to see more of this movie so, tonight, we’re thrilled to host the exclusive premiere of the first official trailer for “Tray: A Cut of Culture.”

Director and Scranton native Jeremy Saltry has been working hard with producer Lindsay Barrasse on filming and cutting together hundreds of hours of footage to explain why our area’s typically square pizza comes in trays, not pies – and cuts, not slices – along with the Italian dish’s local connections to families and culture. The new trailer features clips from interviews shot at the Lackawanna Historical Society, Arcaro & Genell’s Restaurant and Elio G’s Pizza in Old Forge, and Maroni’s Pizza House in West Scranton, among many locations they spent time in over the past year.

Living in Portland, Oregon a year ago, Saltry has currently been splitting his time between Philadelphia and Scranton to be closer the production and the area that inspired it, continuing to edit and film as the movie becomes more and more anticipated.

“While I do love the West Coast, it is great being back east,” he told NEPA Scene. “It allowed me to really immerse myself in this project.”

With “Tray” continuing to bake and rise in popularity, we chatted with the 29-year-old creator about this long-awaited trailer, where the production is at now, and when we can expect to see the finished product of sauce, sweat, and tears.

NEPA SCENE: When we last checked interviewed you in July, you had filmed for two months. Did you do any additional filming after that?

JEREMY SALTRY: Absolutely. I feel like I could film this forever. At some point, you have to draw a line to a certain degree, but we still continue to film. Part of me is just filming for the sake of filming just because I love to, which is a large part of why I am back to Philadelphia. Of all the places I have filmed, Northeastern Pennsylvania is my favorite. For me personally, it’s an opportunity to show home, to show where I came from. Visually, I just adore the area. It has such a story to tell where words aren’t even necessary at times.

Right now, our primary focus is editing while we film B-roll and establishing shots. We also continue to talk to other shop owners and people from the area. The great part about this film is that it’s very fluid. As you edit and as you build, you can still film. That’s just what we are doing. I can still say we have a few things up our sleeve.

NS: What is it like going through all the footage and watching it again? Does your perspective change at all as you rewatch it?

JS: What is most interesting is the ability to go back to watch, listen, and really pay attention. During filming, you’re having a conversation. Someone is telling a story. If anything, you are trying to remove a camera from a situation. You’re focused on dialogue at the moment. You’re listening. After filming, you can take the time to really understand what someone is saying or trying to convey. You captured a moment in time. You can observe someone’s gestures and really look into someone’s eyes. What is amazing even within that is having everyone’s stories start to weave together. You can see the story develop right in front of you. One story plays off of another. They all do.

For me, at least, it reaffirmed that we really did have a great story. I don’t think my perspective changed, but I had the ability to understand it that much more.

NS: How has the story taken shape through the editing process?

JS: Beautifully. What is amazing is that most people we have filmed have kind of the same story to tell, yet everyone has different influences growing up, different personal experiences and perspectives. That is what makes this beautiful. Going into that even further on the history side, it was as if almost everyone we interviewed held a part of the puzzle, a part to the story that they imparted that was passed down to them. Inspiring, to say the very least.

We also noticed some other themes, things in common. It is why we are still filming. As much as editing can be very very labor intensive and almost draining at times, it truly is where the story comes together.

NS: About how many pizzerias will be featured in the movie?

JS: Right now we have six or seven. So many factors went into who we ended up filming. While years in business and history were a factor, there were other elements, such as the role they played in the community and the story they personally told. We filmed some shops that were open half as long as some others, but they had such a unique perspective. That’s what I had to remind myself a few times. You get very caught up in history, which is very important but, after all, “Tray” is also about people. Once you understand that you are filming a person’s individual story more so than their pizza story, that’s when things clicked for me.

We still aren’t done filming, but we do have a limited amount of time to tell a story, so maybe more!

NS: There’s lots of other places in there, too – mines, churches, etc. How do these other locations play a role in the story you’re telling?

JS: History. This trailer did a good job at conveying that. 85 percent of the world’s anthracite coal came from NEPA. As people became established in the area in regards to coal mining and made something of themselves, you have other classes of people or different cultures come in to replace them; then they move up. That really is how pizza came to be in this area. Pizza as we know it really started to be prolific in the United States post-World War II when the troops came back from Europe. Because of mining and immigration, pizza existed here for decades before most other places.

To tell our story, people need to know where we come from, who our ancestors were, what their beliefs were, and the struggles they endured to provide for future generations.

NS: Let’s talk about your team. What has everyone brought to the table during this process, and have you been working with anyone else on the film?

JS: We still try to keep it close-knit, but have a good mix of people from the area and people outside the area, which is important. It adds to the intimacy of the final result of the film. The people involved know the story. They understand the story. It’s almost hard to have to get someone up to speed with all that has been done. Because of how labor intensive the editing process is, we brought on some more very talented people – people I cannot wait to work with.

That being said, that is what everyone has brought to the table. Excitement, enthusiasm and, most importantly, dedication. I step back at times and it is inspiring for me, which ends up inspiring other people because I am excited. It’s amazing.

NS: What was the process of putting the trailer together like?

JS: Challenging, inspiring, and everything in between. A great deal of time, thought, and hard work went into making this trailer – many, many late nights. I think that shows in the work. It kind of tells a story within a story, a short story within two and a half minutes. To think that is just a fraction of the final film is amazing to me.

NS: How did you decide what footage would end up in this trailer?

We had a good understanding of what we were trying to convey, what ideas we wanted to leave people with. I was so specific on what emotion I wanted people to feel when they were done watching. That was the determining factor.

NS: What are you hoping people will take away from this trailer when they see it?

JS: A feeling, a sense of appreciation or understanding to a different part of life. I just want to invoke some type of emotion, whether you know the story or not. I don’t want people to watch this necessarily; I want people to feel it. That has been and always will be my goal.

NS: This trailer only scratches the surface of what’s in the film, of course. Will you put together more trailers before the release?

JS: I don’t think so. I am very happy with the result of this trailer. I almost want to leave the rest as a surprise. Making this trailer was labor intensive, and we really need to focus on the tasks at hand. There will most certainly be updates along the way.

NS: You’ve received a lot of messages about when this movie will be finished, so you’re probably sick of answering this question, but do you have any idea when it may be completed or when it may be screened publicly?

JS: At this point, honestly, I am not sure. Ideally, in a year. The reason why it is taking so long is that we have been and always will be committed to making the best possible version of this film.

NS: What are your plans for the film once it’s completed? Will you be sending it out to film festivals or looking for someone to buy and/or distribute the film?

JS: This project received a great deal of attention, even in its early stages before anything was filmed due in large part to the support we received from the community and even beyond that. That opened up many doors for us. I can’t really answer that right this moment. We are just focused on making the best documentary possible.

JS: This project was a massive undertaking. While we understood what we were getting into, there are times that are challenging.

I have personally put everything on the line, so to speak, a few times, based huge life decisions around getting this done and doing it right. I put comfort aside and didn’t let fear get the best of me. I believe in what we are doing. We all are putting a considerable amount of time, effort, and energy into this. All of us. It’s such a labor of love. There are times where any one of us could have easily given up. We won’t. We never will.

I think to anything in this world, there is an ebb and flow, ups and downs, highs and lows – moments where you are inspired and moments you need to find inspiration. You just can’t give up. To any endeavor, keep pushing, always move forward, and do your best to inspire others to do the same.