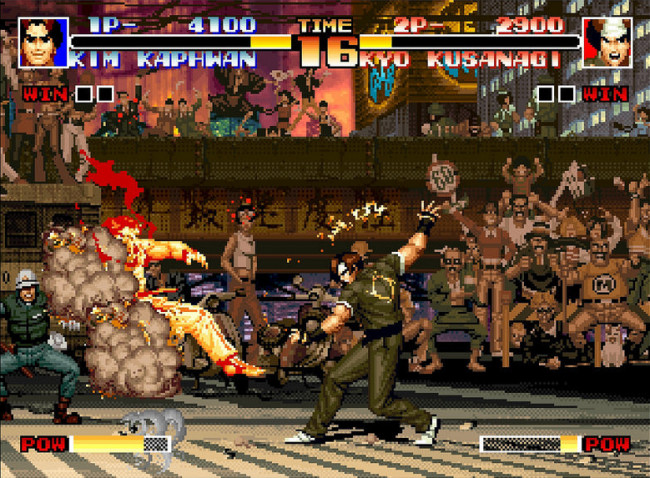 In the ‘90s, creating arcade games that stood out among the cabinets was imperative, and perhaps no genre of arcade games was in more constant need of this than fighting games, which ruled the roost in most arcades around the globe at the time.

While many gamers chose their sides in the “Street Fighter” versus “Mortal Kombat” debate, other developers were hard at work trying to find ways to unseat or at least make room at the table for themselves between these two heavy hitters. SNK threw their hat in the ring with something so simple and yet so innovative that it too would stand the test of time.

Why? Well, we’re fixing to find this out today as Turn to Channel 3 looks at “The King of Fighters ’94” on the Neo Geo AES!

While perhaps not as iconic as the music you hear in the “Street Fighter” or even the “Mortal Kombat” games, “King of Fighters ’94” presents a soundtrack of tunes that are both fitting and not terribly stereotypical of the fighters they represent. What makes the soundtrack good, yet under the radar is pretty much what makes most great Neo Geo soundtracks suffer the same fate – the lack of owners the Neo Geo actually had in America at the time. Something tells me that if this weren’t the case, we would be discussing this soundtrack with other great fighting game soundtracks of the time.

The announcer can appear robotic and serious, but this is something you found in most fighting titles of the time, so it is forgivable, but it can be difficult to understand some of the names of the fighters, which is kind of sad. All in all, this is a well-rounded soundtrack of tunes and sound effects that exemplify fighting games of the ‘90s.

“The King of Fighters ’94” suffers from some pixilation issues at times, which is largely due to how much detail SNK put into this game, especially in its level design. Whereas games like “Street Fighter II” and “Mortal Kombat” immediately placed you into the level, no questions asked, and the fight began, “King of Fighters ‘94” further ups the ante of anticipation by having a superb intro to each level that fits like a glove and shows off the superior hardware of the Neo Geo.

You find yourself in areas like a Brazil rainforest helicopter crash, complete with groves of vines and trees spreading apart before battle, the stone walls of a Mexican club, and a spectacular thunderstorm in Korea, just to name a few. This is one of those noticeable differences among fighting game staples of the time that helps make the “King of Fighters” series stand apart from the rest. The fighters look great, although some of them look a bit alike, yet they still having enough diverse characters (even a little Freddy Krueger look-alike!) to bring something new to the genre.

This is no big deal in 2017, but in 1994, there weren’t fighting games to give you the option of solo fights or team battles. Sure, games like “Marvel vs. Capcom” and “Capcom vs. SNK” helped popularize this option, but “King of Fighters” is where it all started. While you are limited with the use of your partners to only some special moves, the fact that your match isn’t over until you defeat the whole team was a totally new concept that added longevity and replay value to the game. What’s also really neat is how your team members are there with you in each fight, watching nearby, reacting to each win or loss.

Lastly, each team seems to have something for each kind of player as far as strategy and attack preference. There are teams that specialize in quick, agile attacks, while others are more about grabbing their opponents, tossing them up, and spiking them into the ground. Even though “King of Fighters ‘94” does suffer from some hilarious Japanese to English translations like, “You are all fool,” it doesn’t take enough away from the fun of making your way across the globe and facing off against some tough teams. Expect to face some stiff competition earlier in the game than you’d expect. Executing special moves will seem difficult at first, but those familiar with the formulas of “Street Fighter” and “Mortal Kombat” will feel right at home in time.

“The King of Fighters ‘94” is available in both cartridge and CD form, but you’re actually going to prefer the cart because there’s not much of a difference, and the CD version has long and poorly spaced out load times that take away from the fun. Relatively inexpensive in loose form, a complete in box copy will run you $250!

“King of Fighters” would go on to span several more entries over the years – some good, some great, some terrible – but even today, in 2017, “King of Fighters” remains a popular choice for fighting game connoisseurs.

Tune in next time as we continue down this path of Neo Geo games with a perennial favorite, “Metal Slug!”

Until then, keep warm, shovel out when you can, and remember, spring is coming soon, but now is the perfect time to stay inside and game on!