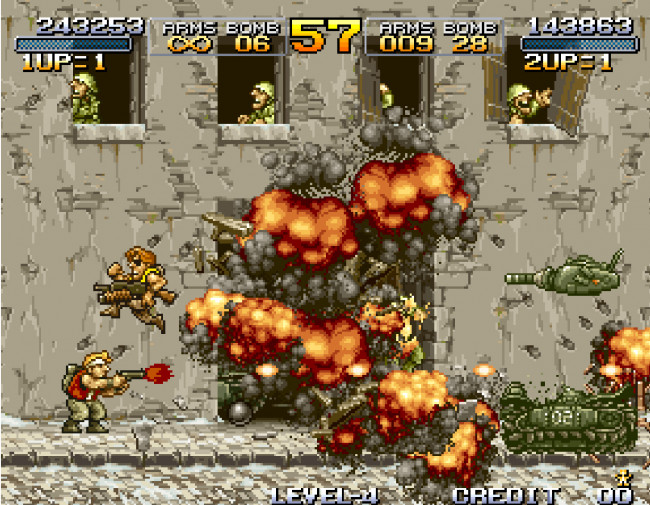 The genre of run and gun games is no stranger to prominence, with notable titles such as “Contra” on the NES and “Gunstar Heroes” on the Sega Genesis and, yet, as last week’s review of “The King of Fighters ‘94” has shown this writer, the Neo Geo always had games that spiced things up a bit while still remaining under the radar to an extent in comparison to similar titles.

Today’s game, “Metal Slug,” is another superb example of this. Let’s gather the squad (the Peregrine Falcon Squad, to be exact) and ready our weapons as we run through another staple of the Neo Geo AES library!

With games like this, creating an intense, adrenaline-pumping soundtrack can often be a make or break situation in the success of the game. It can also help deter a bit from the often-insane difficulty present in these titles; the original “Contra” is clear evidence of this. Thankfully, like “Contra,” “Metal Slug” possesses one of the best soundtracks for a run and gun I have ever heard, with music that gets you pumped as you blast through enemies to tunes that reach operatic proportions during boss fights.

If this isn’t enough for you, the sounds of enemies reacting and shrieking are downright hilarious at times. I also found the announcer to be just enough to add a bit of flavor to the game while not being too annoying. Composers knew just what to do in order to create a soundtrack that would lure gamers in, and it shows throughout.

On the surface, “Metal Slug” may appear to be just another Grade A title in a vast genre of good games, but like other Neo Geo titles, the attention to detail is what sets things apart. Sure, the massive array of enemies, the boss fights, and even a screen-sized building collapsing are all just awesome but, for me, things like seeing your hero’s breath in the cold air of a winter stage or watching your reflection appear in puddles is what truly sold the game for me graphically. There may be games far more legendary within the run and gun genre, but few that look this good!

While Metal Slug does suffer from some slowdown at times, the reason is simply because of everything it is trying to throw at you at once! The action seemingly never stops and, despite these limited moments of slowdown, I enjoyed destroying tanks, soldiers, and whatever else was in front of me, whether I was my Rambo stereotype or I was riding in my awesome Metal Slug vehicle, taking carnage to a whole new level.

Yes, sometimes you want a game that challenges your mind, involves many hours of gameplay to master, or even involves collecting items, but sometimes you just want to blow stuff up, and “Metal Slug” fulfills that comfort food for the gamer’s appetite quite well.

Sure, “Metal Slug” doesn’t have the privilege of being one of the first notable run and guns and, like many titles for the Neo Geo, gamers have only just discovered its greatness within the last decade or so, due to how expensive a Neo Geo home console was. That being said, whether you plan on plopping down $60-$100 for a copy, getting one of the compilations like “Metal Slug X” on the PS1 or “Metal Slug Anthology” on the Wii, or purchasing it on the Wii Shop Channel, you owe it to yourself to play this game, especially if you grew up with “Contra” and “Gunstar Heroes” in your life.

Well, that does it for me this week. Next week we finish off our month of Neo Geo titles with the sequel to another staple of the Neo Geo’s library, “Samurai Shodown 2!”

Until then, remember, a true spring will be here soon… we hope. For now, sit back, relax like a slug, and game on! 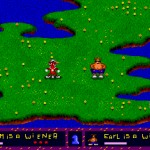