Last week, you saw the hilarious cooking show parody that comedian Ron Babcock shot to promote his debut comedy album, “This Guy,” on Austin, Texas indie label Sure Thing Records. The Scranton native who now lives and performs in Los Angeles also released a short cartoon of one of his stories featured on the album.

The animation by Dilara Mundy recreates Babcock’s funny anecdote about meeting a beautiful woman on the subway – and the enthusiastic stranger who cheered him on. Many other comedians have had their bits animated, like in Comedy Central’s “Shorties Watchin’ Shorties” and “Re-Animated” series, so it’s cool to see a local comic receive similar treatment.

“My album charted at No. 13 on Billboard Comedy. That’s higher than most of the ska bands I listened to in high school,” Babcock cracked.

This video is one of many that he has written and starred in, recently hitting the front page of comedy video website Funny or Die with a skit on terrorism.

He has also put out some teasers in the style of lyric videos that mention some of the topics on the new album, including great names and Netflix:

“This Guy” is the eighth album from Sure Thing Records, which released iTunes No. 1 comedy albums “Hard Feelings” by Brooke Van Poppelen and “Hi, Lonesome!” by Jay Whitecotton in 2016, and it looks like Babcock is well on his way.

Over the years, he has appeared on “Adam Devine’s House Party” on Comedy Central, “Last Comic Standing” on NBC, “The Life and Times of Tim” on HBO, and “The Rotten Tomatoes Show” on Current TV. Named one of the New Faces of Comedy at Montreal’s Just for Laughs Festival in 2012, he has performed at other big comedy festivals like Bridgetown, RIOTLA, Montana’s Big Sky, and San Francisco Sketch Fest, as well as the Edinburgh Fringe. The LAist once called Babcock “a singular stand-up force to be reckoned with,” and “This Guy” proves that statement.

See photos of Babcock performing as a special guest at the NEPA Scene’s Got Talent Finals Showcase last year here. 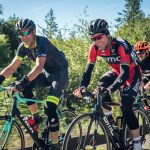