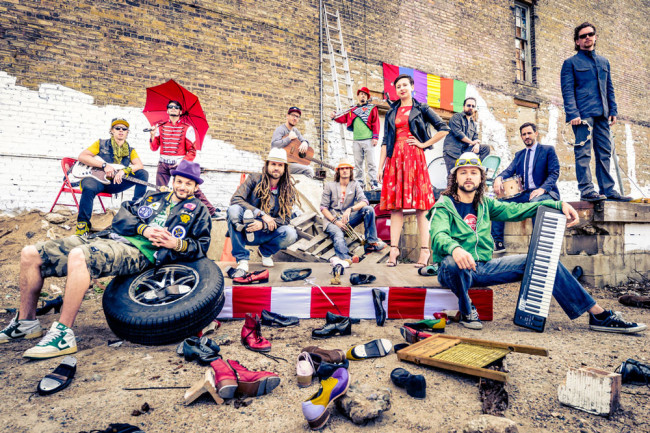 Homegrown hoofers from the Minneapolis arts scene known as the Rhythmic Circus will bring their dynamic tap and music performance “Feet Don’t Fail Me Now!” to the F.M. Kirby Center in Wilkes-Barre on Sunday, April 30 at 7:30 p.m.

“Feet Don’t Fail Me Now!” mixes hard-hitting percussive dance and a live rock band and guarantees to enthrall audiences of all ages with its medley of positivity and infectious rhythm.

Three guys and a gal combine rapid-fire tap talent with the funky styling and original lyrics of a seven-piece band with a big, brass sound. Add vocal percussionist Aaron “Heatbox” Heaton, the human beatbox, and it’s easy to see why this show earned a 2012 Edinburgh Festival Fringe Spirit of the Fringe Award.

From an a cappella singing and tap number to a percussive chair routine (think Stomp) to the stripped down “Dream Song,” an acoustic number inspired by a front porch jam session back home in Minneapolis, “Feet Don’t Fail Me Now!” is a genre-hopping hour and a half of rock, blues, and soul.

Brilliant staging and integrated choreography is most evident in “Circus,” a crowd-pleaser in which the dancers, decked out in colorful marching band attire, join the musicians in an intense, fast-paced number that features a tuba solo, original vocal lines, and tap breakdowns.

“We created ‘Feet Don’t Fail Me Now!’ out of the desire to get people back in touch with the spirit of celebration. The show helps remind our audiences that there is always a reason to get up, let go, and dance,” said co-creator Nick Bowman.

“The name of our show comes from an old New Orleans chant dating back to the early 1900s – a time when the city was rich with culture and spirit, they literally had parades every Sunday just to celebrate their lives and community. Rhythmic Circus has adopted the chant as more of a rallying cry. We have been ecstatic to see it strike a chord with people everywhere from our home town to off-Broadway and all the way across the globe.”

Although the company’s official inception was in 2007, the troupe’s core members have been collectively choreographing and performing together since 2000. No stranger to the spotlight, they were recently featured in “Minnesota Original,” a weekly art series on Twin Cities Public Television, collaborated with VocalEssence in Witness: A Tribute to Duke Ellington at the Ordway Performing Arts Center, and appeared in the Crash Bang Boom! Festival at the Minnesota Orchestra Hall.

“Feet Don’t Fail Me Now!” premiered in August 2008 at the Ritz Theatre in Minneapolis, Minnesota and went on to tour both nationally and internationally, including a recent six-week tour throughout China and 25-show run in New York City at the New Victory Theatre. The ensemble was awarded in two categories of the Minnesota SAGE Awards for Outstanding Performance and Outstanding Ensemble and was also named the Best Dance Performance by the Minneapolis/St. Paul City Pages.

As “Feet Don’t Fail Me Now!” continues to spread their positivity with audiences everywhere, it remains true to its mission to provide inspirational experiences for all age groups and cultural backgrounds through a sensational blend of theatre, music, and dance. 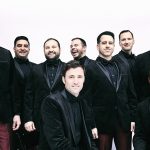 A cappella group Straight No Chaser sings at F.M. Kirby Center in Wilkes-Barre on Sept. 16 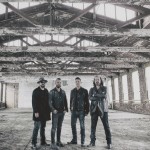