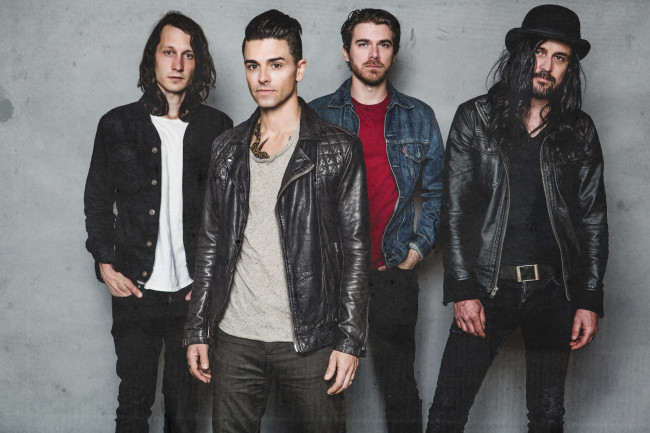 It was announced today that platinum and gold-selling Florida emo band Dashboard Confessional will be performing with The All-American Rejects and The Maine at the Sands Bethlehem Event Center on Sunday, July 30 at 7 p.m.

Tickets, which are $39.50, plus applicable fees, go on sale this Friday, May 12 at 10 a.m. and can be purchased at sandseventcenter.com, the Event Center box office (77 Sands Blvd., Bethlehem), ticketmaster.com and all Ticketmaster outlets, or by phone at 800-745-3000. A special “Me+3” discount will be available, as well as two levels of VIP experiences, including a private performance and backstage meet and greet with singer Chris Carrabba.

Propelled by Chris Carrabba’s intimate and emotionally raw lyrics, sweeping acoustics, and his charismatic presence, Dashboard Confessional stands as one of the biggest alternative bands of the 2000s. Critically acclaimed and embraced by a legion of fans, Dashboard’s brand of alternative rock swept through a generation who embraced their albums and sold out arenas – their last full band tour culminated in selling out New York City’s Madison Square Garden.

“One is reminded of Bob Dylan’s ‘Blood on the Tracks,’ only stripped down to the bare essentials,” praised PopMatters about their debut “The Swiss Army Romance,” setting the tone for the band’s massive impact on both their fans and the media alike, including Spin, Alternative Press, and MTV, among many others.

Their breakthrough second album 2002’s “The Places You Have Come to Fear the Most” included the trademark single “Screaming Infidelities,” yielding their first gold-certified album and peaking at No. 5 on Billboard’s Top 200. Later that same year, the single won the MTV2 Award at the 2002 MTV Video Music Awards. Their third album, “A Mark, A Mission, A Brand, A Scar,” gave them their first Top 10 Modern Rock single “Hands Down” and reached No. 2 on the Top 200.

To date, Dashboard Confessional has a platinum album with their live release “MTV Unplugged,” three RIAA certified gold-selling albums, and has had numerous songs featured on television (“Cougar Town,” “One Tree Hill,” “Scrubs,” “All My Children,” “Laguna Beach,” “NCIS,” “Cold Case,” and “Clone High”) and in movies (“Shrek 2,” “Spider-Man 2,” “Made of Honor,” and “Sydney White”).

Since the start of their career, alt-rock/power pop titans The All-American Rejects have sold over 10 million albums worldwide and helped define a post-emo sound that was the soundtrack of a decade. With smash hits “Gives You Hell,” “Dirty Little Secret,” “Move Along,” “Swing, Swing,” and “It Ends Tonight,” their songs have become an indelible slice of the era. Frontman Tyson Ritter has also added acting to his creative arsenal most recently, with credits including “Love and Mercy,” HBO’s “Lewis & Clark,” NBC’s “Parenthood,” and “Betas.”

The All-American Rejects are finalizing new material to be released in the upcoming months.