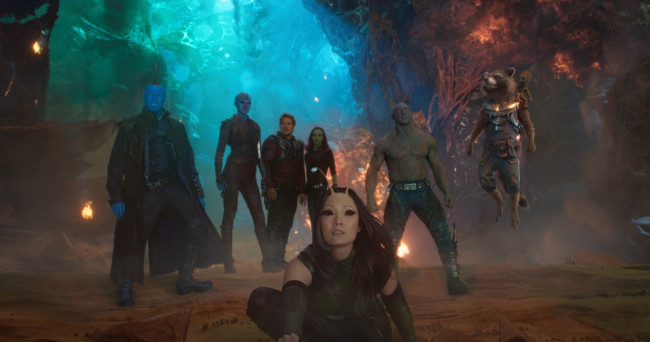 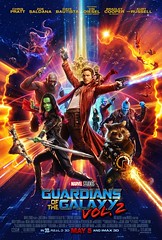 ‘Guardians of the Galaxy Vol. 2’
Rating:

How many root beer floats are too many?

That seems like a trick question, right? How could one possibly put an objective limit on delicious, sugary goodness?

I, like many, love a good root beer float. It’s a delicious treat that hits my sweet tooth like a laser blast. If someone put a root beer float in front of me, I would happily snap it up.

Here’s the thing, however.

Next thing you know, you have more root beer floats in front of you than you were prepared to handle. You only have two hands and your stomach is already pretty full.

For me, “Guardians of the Galaxy Vol. 2” was a bit too much for me to handle without suffering a mighty case of sugar shock.

Now don’t get me wrong – the second installment of Marvel’s space epic is by no means bad. It’s colorful, funny, and a joy to watch but, man, there’s a lot going on in this.

We see the return of the original crew of Star-Lord (Chris Pratt), Gamora (Zoe Saldana), Drax (Dave Bautista), trash panda Rocket (voiced by Bradley Cooper) and, of course, the powerhouse that is Baby Groot (voiced by Vin Diesel) up to their same old tricks.

Along with the main cast are a sea of other familiar faces, like Yondu (played by one of my personal favorites, Michael Rooker) and Gamora’s estranged sister Nebula (played by Karen Gillan). These characters are as charming as you remember them, picking up right where the original left off.

Now, just looking at the list of names already up on that screen, it’s a crazy amount of star power to process, right?

Lots of characters to focus on and develop, right? Well, surprise – I haven’t even mentioned the new characters in the movie, such as Ego (played by Kurt Russell) and Mantis (played by Pom Klementieff).

Here’s my biggest issue with the movie overall – there’s just waaaay to much to process here.

Remember my witty analogy at the beginning of the article about the root beer floats? Well, every single one of these characters is a delicious root beer float. I want to be able to take my time, enjoying them and all the interesting, individual flavors they have.

Instead, writer/director James Gunn expects viewers to try and enjoy all of those floats while on a roller coaster going a thousand miles an hour while tripping on LSD.

That’s still a fun as hell coaster ride; I just didn’t have time to get enough sips out of each individual root beer float for my linking.

I wish we had more time to explore some of the pretty interesting and complicated relationships and feelings presented in the film. Just by the nature of the movie being so fast and fun, you lose the depth of character what would have really fleshed the film out. There’s almost too much to handle. The film flies at a mile a minute, with every single character telling jokes and gags the whole time.

Everyone has something going on that centers on the importance of family. The film does a great job of having these characters interact in genuine, realistic ways. The film’s writers clearly understand what motivates these characters and makes them tick, even if a lot of the interactions are pretty surface level.

It also can’t be ignored how gorgeous this movie is. All of the bright colors and awesome CGI effects really are breathtaking at some points. From huge monsters to simple de-ageing makeup, the effects here stand out.

This movie is visual candy, always giving you something interesting to look at when the action slows down, though those moments are few and far between.

In the end, “Guardians Vol. 2” is never boring or poorly made, like other Marvel sequels have been in the past (*cough* “Thor: The Dark World” *cough*).

The film also has an interesting conflict with the villain, another major issue that has plagued many Marvel films over the years. The villain here is enough to keep the plot moving along and provide an interesting driving force. It’s still not great, but much better than, for example, the generic villain Ronan from the first “Guardians.”

While “Guardians Vol. 2” may be a real punch to the sweet tooth, it’s a cavity I’m willing to deal with. 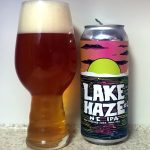