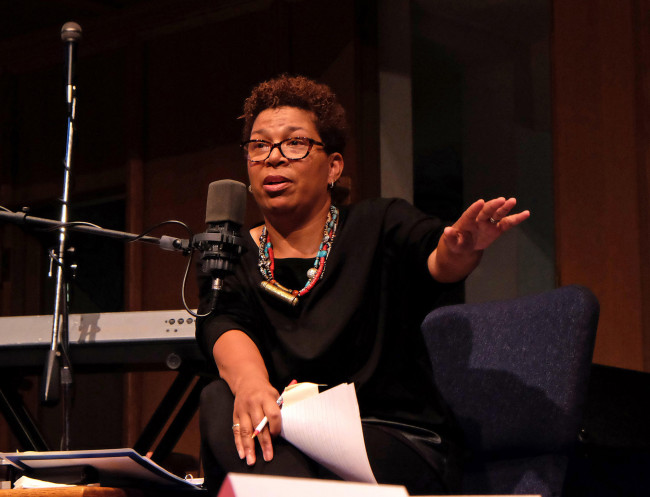 Michel Martin, weekend host of “All Things Considered” on NPR, will be at The Royal Theater at the University of Scranton’s McDade Center for Literary and Performing Arts on Tuesday, June 6 at 7 p.m. to host the final installment of NPR’s “Going There” live event series – “Civics 101: What Does It Mean to Be a Good Citizen?” NPR and NPR Member station WVIA are collaborating on this unique live event to present a fresh, thought-provoking discussion about what it means to be a good citizen in 2017.

In many countries, citizenship means you are required to do something. In America, a fundamental right for many is the freedom from government. But the 2016 election saw voter turnout at a 20-year low. Some polls show a public either turned off by politics and government or unwilling to engage with people with different views. Other polls show many Americans are uninformed when it comes to basic facts about their country.

“Most Americans take great pride in our country,” says Martin. “But even in an election as consequential and hard-fought as the last one, fewer than four in 10 of the people who were eligible to vote actually did. Even fewer people seem to know basic facts about our history and government. Barely a quarter of us can even name all three branches of government. So what does it mean for our democracy if we know so little about how it’s supposed to work? Is that a problem and if so, how did it start and how does it get fixed? And if those aren’t the measures of a healthy democracy, what is? How do you think we’re doing? Those are just some of the questions I am eager to talk over with our audience and panelists in Scranton.”

“We are elated that Michel and the ‘Going There’ team are coming to Northeastern Pennsylvania,” says Tom Currá, WVIA president, CEO, and executive producer. “We believe this conversation on civic leadership will create a meaningful dialogue that will inspire our audience. WVIA is proud that our region will be showcased in this NPR event, and we encourage our audience to attend and participate.”

The event at the McDade Center (313 Monroe Ave., Scranton) will be streamed live on video and recorded for a featured segment on a weekend broadcast of “All Things Considered.” The discussion will continue online and the public is invited to participate, using the hashtag #NPRGoodNeighbor and following @NPRMichel and @WVIATVFM.

“NPR Presents Michel Martin: Going There” officially launched in 2014 with a mission to “bring the studio to the story.” In collaboration with NPR Member station partners, “Going There” has engaged audiences across the country in deep and sometimes emotional conversations about pressing issues surfacing locally and nationally. The program has traveled to New York City, Charlotte, Dallas, Miami, New Orleans, Detroit, Los Angeles, Des Moines, Montgomery, Pittsburgh, Kansas City, Ft. Collins, Chicago, Cleveland, Asheville, Madison, San Diego, and now Scranton. In addition, in 2014, the “Going There” team assisted with two community conversations in Ferguson, Missouri in the wake of civil unrest.

The live event series addressed issues as wide ranging as immigration, gentrification, and voting rights to the ethics of football, diversity in theater, and how we produce our food and what we do with our water.

“Three years ago, we set out to engage communities around the country by hosting the kinds of complex, deep conversations we often have in newsrooms but which don’t fit easily into a three or five-minute piece for the radio,” says NPR Chief Operating Officer Loren Mayor.

“This project gave us a chance to do that – to bring people together who often don’t have a chance to be in a room together; to create the space for authentic, meaningful, and sometimes difficult conversations; and to listen to people in communities who don’t always have a chance to be heard. Michel Martin succeeded in bringing people together in conversations that were memorable and important and, at the same time, deeply personal and human. We are very thankful and we know the spirit of this project will continue through other platforms.”

“NPR Presents” is wrapping up the third and final season of this particular production of “Going There” conversations with this capstone event in Scranton. However, as weekend host of NPR’s “All Things Considered,” Michel Martin will continue to travel across the country and together with NPR Member stations, engaging live audiences in important and dynamic conversations.

“Michel is extraordinary in front of a live audience,” says NPR Vice President of News Programming and Operations Christopher Turpin. “She has a brilliant way of bringing out the stories people are often afraid to talk about, but desperately want to hear. Nothing is off the table with Michel, and we’re looking forward to her continuing going right there.”

“NPR Presents Michel Martin: Going There” is made possible by The Kresge Foundation and by a collaboration between NPR and WVIA.

NPR’s rigorous reporting and unsurpassed storytelling connect with millions of Americans every day on the air, online, and in person. NPR strives to create a more informed public, one challenged and invigorated by a deeper understanding and appreciation of events, ideas, and cultures. With a nationwide network of award-winning journalists and 17 international bureaus, NPR and its Member stations are never far from where a story is unfolding. Listeners consider public radio an enriching and enlightening companion; they trust NPR as a daily source of unbiased, independent news and inspiring insights on life and the arts.

WVIA Public Media is a catalyst, convener, and educator, using media, partnerships, powerful ideas and programs to improve lives and advance the best attributes of an enlightened society.

NEPA SCENE PODCAST: ‘Break the Silence’ on sexual violence and domestic abuse through art in Scranton
Undertaker returns to ‘WWE SmackDown’ in Wilkes-Barre on Nov. 15, arena accepting donations for vets