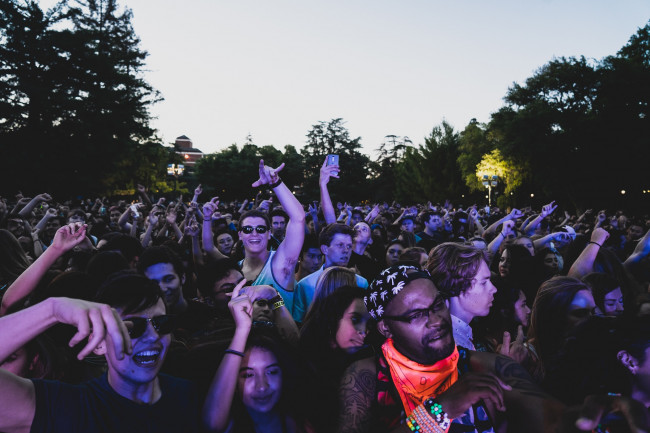 Attendees of the sixth annual Mad Tea Party Jam last weekend have plenty to be mad about after fans, staff, and even the headlining band fell ill due to what may be a norovirus outbreak at an outdoor venue in Artemas, Pennsylvania.

After organizers of the music festival contacted the Pennsylvania Center of Epidemiology and encouraged patrons to report their health issues to the Department of Health, stories came flooding in of vomiting, diarrhea, abdominal pain, nausea, and some symptoms serious enough to require hospitalization from concertgoers and festival staff who have shared their experiences on social media. It is unclear how many came down with the sickness from Thursday, June 15 through Sunday, June 18, but it was enough to disrupt the show and force some to leave early.

Headlining jazz rock band Papadosio, who are scheduled to play the Peach Music Festival in Scranton in August, canceled their third set after three of its five members became sick. Most of the complaints online from those in attendance blame the venue, Four Quarters Farm, rather than the festival itself.

Founded in 1995, the farm, which serves as an “interfaith sanctuary of earth religion,” has hosted music festivals for years and, by their own admission in a statement released on June 20, has had similar outbreaks dating back to at least 2008. As recently as the weekend before, patrons of the Wickerman Burn festival, held June 8-11 at Four Quarters Farm, reported similar health problems.

On June 22, Four Quarters released another statement after completing a full day of inspections and testing by over a dozen representatives from the Pennsylvania Departments of Environmental Protection, Sewage Enforcement, Food Service Licensing, Bureau of Epidemiology, and township authorities. While the investigation is still ongoing, “the general consensus is that we have suffered outbreaks of norovirus,” Four Quarters founder Orren Whiddon wrote.

The norovirus can be spread through water or food contaminated by fecal matter, contact with an infected person, breathing contaminated particles in the air, and by touching contaminated surfaces. Those who contract the virus typically recover in two to three days.

“We wish to again express our sympathy and concern to those people who have experienced this contagion, and our appreciation to those who have shared with us their medical histories,” Whiddon said.

While the farm explained the issues in detail and what they’re doing to correct them, many patrons questioned how and why these issues continue to happen there.

“I really enjoy the land, but there is clearly a problem with the grounds there. I’ve never seen so many people get sick at a festival before. And it definitely wasn’t any fault to the festival itself. Throwing up, having diarreah [sic], and not being able to move from the medic tent Saturday night was definitely not what I was expecting to happen. I can’t see myself going back to this venue until they fix whatever problem(s) that they have,” festival attendee Jacob Hjort posted in a Facebook review of the venue.

“Its a shame that people who own & run this land can’t take ownership for their problems, because they really do have such a beautiful piece of land. Not only do they put festival goers at risk by bringing in more people than their septic systems can handle, but cause even bigger problems for the wonderful people who throw parties on their land. We all go to lots of festivals & this doesn’t happen anywhere else… so why here & why at multiple events at this venue?” Maggie Gallagher wrote in another review.

“There is then a correlation between the people who have become very ill, and this sprawling condition of mismanagement. If it were not for this despicable attempt to fleece people of their money at the expense of our health (and potentially lives), the property would be a wonderful place to stay,” concertgoer Pat Thompson added.

“My girlfriend and I got violently ill. We’ve spent almost 200 dollars on doctor visits, medication, cleaning supplies, and then there’s our lost wages from work. The overflows at 4qf were exacerbated by the rainfall. But one need not be a waste management expert to understand that any overflowing of human wastes is of monumental importance. One need not be an expert in psychology either to understand that the management of 4qf is corrupt and guilty of malfeasance by allowing this to happen. Even casual research on 4qf reveals that this has been ongoing for up to nine years.”

Four Quarters has two upcoming music festivals scheduled – Drum and Splash on June 28-July 2 and the Big Dub Festival on July 26-30 – and says they plan to fix the issues and take proper precautions moving forward, including expanding “our policies of education and awareness, including detailed workshops at both Drum and Splash and BigDub.” Their full statement is below:

To our Visitors and Friends

Yesterday, Wednesday June 21st, we completed a day long round of inspections and testing of our facilities by over a dozen Pennsylvania State representatives from the Departments of Environmental Protection, Sewage Enforcement, Food Service Licensing, our Township Authorities and The Pennsylvania Bureau of Epidemiology. We would like to commend these professionals for their thorough work in the face of ever increasing budget cuts.
The following presumes that the reader is knowledgeable, especially of Norovirus, and I recommend Wikipedia@Norovirus as a primer.

PA DEP conducted spot chlorine testing of drinking water spigots located throughout camp and found proper levels in all cases. Our latest monthly laboratory test samples were reported on June 12th, 2017 as perfect; with new test samples collected today to repeat our monthly testing. We were asked to remove a bypass valve from our delivery manifold to eliminate any possibility of non-chlorinated water entering the final supply.

Sewage Enforcement did a complete inspection of our sewage facilities and found them all to be in good working condition. Our lines, service risers, tanks and leach field are in good condition. The cracked pipe joint of June 2016 was found to be in good repair and to have been repaired in a timely manner. Our kitchen baffle box (which exists to catch fabric objects flushed into the system) was examined and worked as intended. We have volunteered to bypass the kitchen baffle box and install a new expanded unit in front of the Upper Shower House. The testing and permitting for a new sewage system to be installed in the Members Camping Area will continue.

Food Service Licensing cited our kitchen for a leaking faucet, lack of an anti-siphon coupling, lack of pavement under our outdoor grill and other small items that had been passed in it’s previous inspections. We will be reinspected Friday, June 23rd.

Our Township Supervisor offered his advice and support throughout the day.

Scientists from the Pennsylvania Bureau of Epidemiology took exhaustive interviews of our staff; and made a thorough tour of all of our camp facilities during the first part of the day, with their physical sample taking ongoing throughout the day. As scientists they will not discuss their investigation strategies or communicate opinions until they have concluded data collection and analysis, and can state fact. They do emphasize that parties they interview will never, ever have their privacy breached, or their identities revealed in public. We at Four Quarters wish to emphasize that we will never, ever reveal the identities of persons or venues whose contact information, times of arrival, illness or travel patterns we have provided to the scientific investigators. Norovirus in any kind of sample is difficult to positively identify, and is tested for at regional or national labs. Samples are forwarded for such testing and the results will only be released to the parties concerned, or as part of an official release.

Pending confirmation, the general consensus is that we have suffered outbreaks of Norovirus. It may possibly be a fast moving variant taking advantage of surface, to hand, to mouth transmission; and traveling the transportation corridors. Moving forward the following recommendations have been made:

* Our registration process will include affirmations of present good health and prompt notification to our EMS of any emerging symptoms.
* We will temporarily quarantine two suspected entry point epicenters as a precaution to preserve those campsites as test results are analyzed.
* We will provide even more hand-wash stations and we will aggressively educate in the critical importance of their regular use.
* We will continue and expand our policies of education and awareness, including detailed workshops at both Drum and Splash, and BigDub.

In closing we wish to again express our sympathy and concern to those people who have experienced this contagion, and our appreciation to those who have shared with us their medical histories.