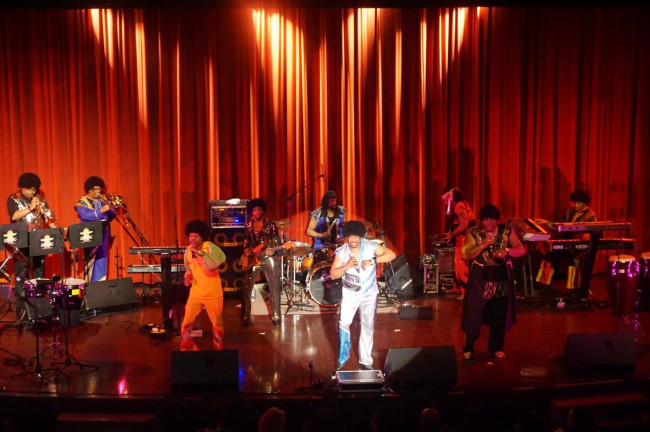 It was announced today that FriendlyHart Productions will present Shining Star: A Tribute to Earth, Wind & Fire at the F.M. Kirby Center in Wilkes-Barre on Saturday, Sept. 23 at 8 p.m.

Shining Star is the closest thing to the real Earth, Wind & Fire. Each member of the band has studied his respective roll extensively. The soulful lead vocals of Maurice White and the sultry tenor of Philip Bailey are highlighted throughout every song with unbelievable reproductions by Wilson Drummer and Eric Rapier Bryant.

Every Earth, Wind & Fire concert is truly an event, a memorable experience, and the essence of that experience is authentically channeled by Shining Star’s inspiring performance.

With a library of Grammy Award-winning gold and multi-platinum records to choose from, Shining Star has selected Earth, Wind & Fire’s most well-known hits. Every song promises to be a crowd-participating singalong.

Earth, Wind & Fire is one of the most innovative and influential contemporary music forces of the 20th century. With a signature sound beyond category and a groove as deep as the soul of the planet, the band has impacted the history of music and pop culture for over four decades. EWF has sold over 90 million recordings, earning them a solid spot as one of the all-time bestselling music artists. Rolling Stone and VH1 ranked Earth, Wind & Fire on their lists of the greatest artists of rock ‘n’ roll.

Originating from Chicago in 1969, EWF’s career achievements include an induction into Rock and Roll Hall of Fame, a star on the Hollywood Walk of Fame in 1995, eight Grammy Awards, and four American Music Awards. Earth, Wind & Fire’s music has influenced, been covered, or sampled by top artists, including Prince, Alicia Keys, Beyoncé, Jay-Z, Usher, Bruno Mars, P. Diddy, will.i.am, and more.