The Mauch Chunk Opera House will celebrate the Woodstock Festival, one of the seminal events in all of rock history, with a concert by Back to the Garden 1969, who will expertly bring that show back to life in Jim Thorpe on Saturday, Aug. 19 at 8 p.m. The Woodstock Festival began on Aug. 15, 1969.

BTTG 1969 is the east’s premier tribute band specializing in the music of Woodstock, incorporating thrilling renditions from the festival by artists as diverse as Richie Havens and Melanie to Creedence Clearwater Revival and Santana. Based in Rye, New York, they’ll visit Jim Thorpe for the third time, having performed twice at Penn’s Peak.

Tickets, which are $23, can be purchased on the Opera House website, by calling 570-325-0249, and by visiting SoundCheck Records (23 Broadway, Jim Thorpe) or calling them at 570-325-4009. The facility (14 W. Broadway, Jim Thorpe) is open from noon-5 p.m. on show days, and tickets are available for most shows at the door at showtime. Parking is available and free after 5 p.m. at the Carbon County lot behind the train station.

Gary Adamson, founder/leader of Back to the Garden 1969, has gathered a group of seasoned players who have toured, performed, and recorded nationally. The musicians are all multi-instrumentalists as well as unique lead vocalists, bringing the music and spirit of the Woodstock era to life. By performing these well-loved favorites, they remind audiences of the astounding breadth and depth of the music of the Woodstock generation.

Woodstock Festival promoters John Roberts, Joel Rosenman, Artie Kornfield, and Michael Lang originally envisioned the festival as a way to raise funds to build a recording studio and rock ‘n’ roll retreat near the town of Woodstock, New York. Despite their relative inexperience, the young promoters managed to sign a roster of top acts, including Jefferson Airplane, The Who, Grateful Dead, Sly and the Family Stone, Janis Joplin, Jimi Hendrix, Creedence Clearwater Revival, and many more.

The town of Woodstock actually denied permission to hold the event, but dairy farmer Max Yasgur came to the rescue, giving the promoters access to his 600 acres of land in Bethel, some 50 miles from Woodstock. The New York Times said, “The event soon became as much about the crowd as the performers themselves, as a peaceful gathering of music lovers gathered together in the final days of the decade that had defined them.” 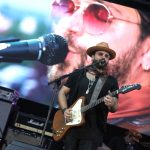