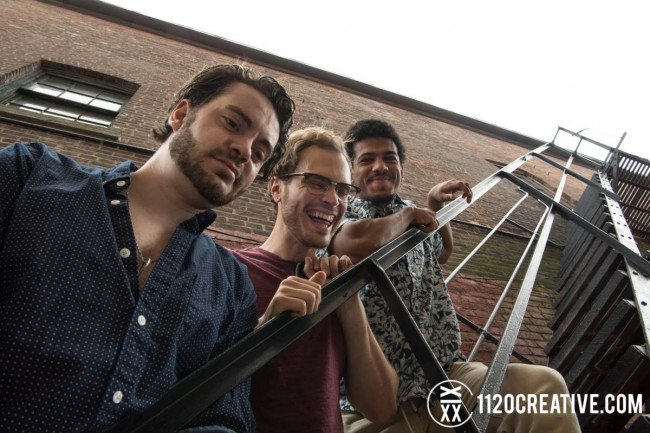 It has been a few weeks since my last column, but with the Steamtown Music Awards, the Electric City Music Conference, the 12-week NEPA Scene Rising Talent open mic and talent contest starting up at The V-Spot in Scranton, and a death in my family keeping me away from the keyboard, it has been tough to compile everything else that’s been going on in the local music scene this month.

That isn’t to say that I haven’t been listening, though, and there’s plenty of new music to choose from – new albums, new singles, and new videos, along with new awards that I can’t thank you all enough for. As I said on stage at the SMAs, I truly am a huge fan of all the music that comes out of this area, including what I’m featuring here today.

♫ Scranton post-hardcore Give Up released their debut album, “Pretend You’re Here,” on Sept. 13, the follow-up to last year’s “No Exits” EP.

They’ve been compared to early 2000s acts like Thursday and At the Drive-In, and those influences can certainly be heard in these excellent 12 tracks:

The Charming Beards’ upbeat new single, “Out of the Valley,” came out on Sept. 13, sending “a message of hope to those struggling with mental health and addiction issues” and giving listeners an idea of what to expect next from the trio:

♫ Scranton rapper Dylan Kiehart, a.k.a. DeeKey, teamed up with RizeOptix, who specialize in aerial photography and videography, to create a beautiful music video for one of his latest tracks, “Insomnia.”

Shot at Coxton Falls, the scenic imagery sets the video apart and is just a taste of more music to come. Working with fellow rapper Ill Brown, Kiehart recorded an album at ID Labs in Pittsburgh and a mixtape that will be released soon, with two songs set to be featured in the upcoming anime series “Primus 7.”

“It’s been a long time since I’ve shared my creations. All the pieces I felt were missing are now falling into place. It’s easy to say that my sister Kelsie, who even in her last moments encouraged me to pursue my dream, has definitely guided me to here. These are all for you, K. Hope you all like this,” Kiehart wrote when posting the video to Facebook on Sept. 13.

♫ We’ve told you to keep an eye on Spur more than once as they continue to get their name out there by touring the East Coast; that’s even easier to do when they put out a music video as cool as this one.

On Sept. 8, the Wilkes-Barre dream punk band released “Out of View,” “painstakingly” animated in a sketchy style with splashes of color by Ryan Normile with video editing and sequencing by Alexa Bairos. It’s visually and emotionally striking:

♫ About a week later, Spur opened for Wilkes-Barre psychedelic groove rock band Mind Choir at a show on Sept. 16 at the River Street Jazz Cafe in Plains to celebrate the release of “Altered Images,” an appropriately named trip of a record that manages to sound both futuristic and sent from the ’60s or ’70s.

Turn these 11 songs up and go for a ride:

♫ Photos from the fourth annual Steamtown Music Awards on Sept. 14 and the rest of the Electric City Music Conference in Scranton on Sept. 15 and 16 are up now on NEPA Scene’s front page and, while it was a lot of work, it was a blast putting together the guide, interviewing bands on the red carpet and chatting with them afterward, running from venue to venue Instagramming updates, speaking on the “How to succeed in the music industry (and life)” panel, and sitting down with ECMC founders Joe Caviston and Kenneth Norton to talk about the conference and the awards in depth in Episode 26 of the NEPA Scene Podcast.

Thank you to everyone who voted for NEPA Scene and helped us take home the Music Publication/Blog of the Year, Music Journalist of the Year, and Podcast of the Year awards this year, and thanks to Joe and Ken for allowing us to be a part of this very special event. It all means more to me than you’ll ever know:

♫ During the solar eclipse last month, we premiered the lyric video for “Shattered,” the first single from “(br​)others,” the debut solo album of Luna Soltera.

It’s a solo project in every sense of the word, as former Silhouette Lies guitarist and backup vocalist Rafael Pimentel wrote, sang, and played practically all the instruments on every track. Recorded at JL Studios in Olyphant, the full six-track album was released on Sept. 15 and can be streamed and purchased via Bandcamp.

“My sound draws influence from alt rock, indie, math rock, space rock, grunge, emo, punk, and post-hardcore,” Pimentel told NEPA Scene. “If you draw a diagram and throw a dart in that murky mess, I’m somewhere in there.”

Photo of Give Up by Keith Perks/1120 Studios