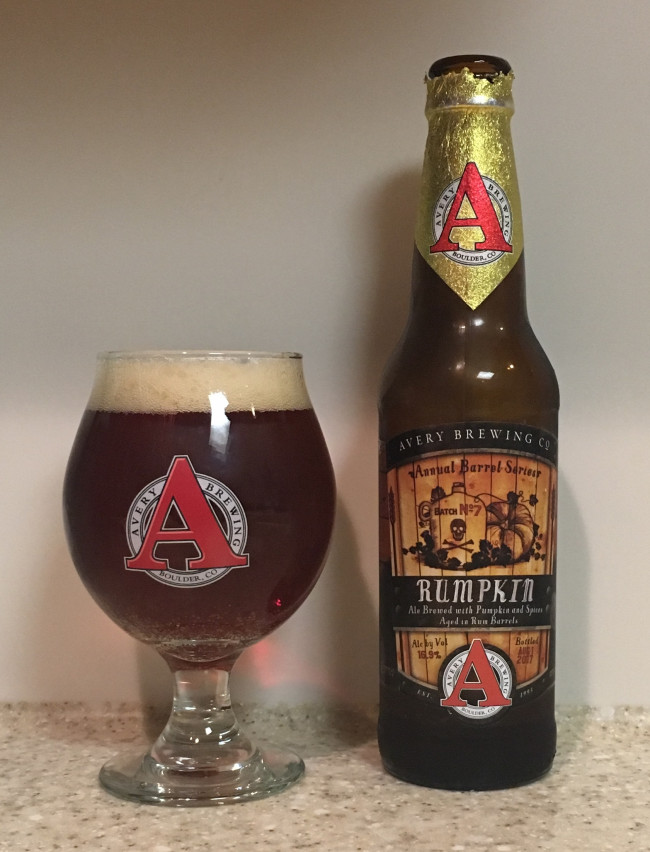 Description: Rumpkin pours a deep amber brown reminiscent of a fall evening, with a rocky off-white head that leaves little in the way of lacing on the glass. The aroma is filled with rum notes and pumpkin spices with sweet caramel malts. The taste follows the nose with rum and pumpkin spices cascading over the palate first, followed by decadent caramel malts. The melding of flavors creates a beer filled with complexity that also opens up more as the beer warms.

The high ABV is apparent but still subtle. This is a beer where the appearance of alcohol will be solely dependent upon experience with high ABV beers. The full body and low carbonation creates a beer that is smooth and easy drinking.

Rumpkin is a great choice for a beer to enjoy on a cool fall evening. While this is a not a beer for everyone, fans of barrel aged beer will want to hunt this one down immediately.

Food pairing: Imperial pumpkin beers are heavier with spices and can overpower many pairings with dishes. However, despite the strong spice flavor and aroma, Rumpkin has phenomenal balance and an easy drinking factor that many lack, which makes it great to pair with hearty fall dishes. This fact is surprising considering the high ABV.

Try Rumpkin with a bowl of chili to warm yourself on a chilly fall evening; feel free to add in your favorite fall gourd as well for a unique twist. The spices in the chili will be the perfect match against the sweetness of the malt, with the pumpkin spices melting into the dish, making for a very enjoyable fall pairing. Pork chops also make a wonderful pairing, with the natural caramelization from the meat settling perfectly into the malts; the beer also has enough heft to scrub the palate clean between bites.

While this beer certainly has a sweetness to it, it is not overwhelming sweet but still goes incredibly well with desserts, especially those of the pumpkin persuasion. Try pairing it with pumpkin pie, pumpkin cheesecake, pumpkin ice cream, or a decadent pumpkin cake with buttercream icing and a caramel drizzle. A truly breathtaking pairing is with a cider donut; the beer’s cinnamon spice notes and graham cracker-like malts will make this dessert pairing a true fall experience that will not be forgotten.

The final word: While many pumpkin beers are brewed as something everyone can enjoy, Rumpkin is a bit different. This is a beer that is not for the faint of heart or those with weak palates. The big 16.9 percent ABV of this year’s batch, which can range anywhere from 15 percent to 18 percent and above, makes it a beer that packs a punch. Rumpkin is a pumpkin beer for big beer lovers who may not enjoy standard pumpkin beer faire. The rum also adds a wonderful depth and smooth quality.

It is a wonderful beer for relaxing on a cool fall evening around a fire pit with friends. However, keep the high ABV in mind and take your time with it to ensure that this beer makes your evening a great one instead of a short one. Rumpkin is also a phenomenal beer to purchase in bulk and age for a few years!