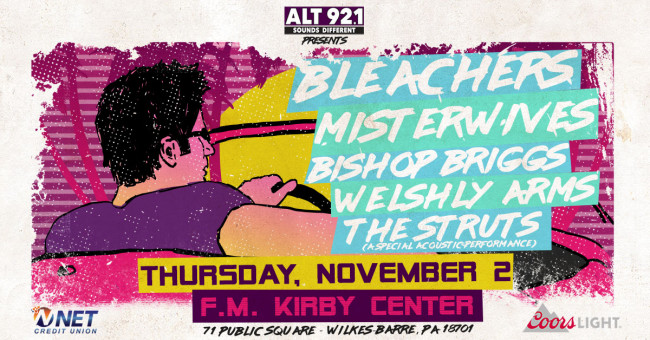 While the new ALTitude Music Festival in Scranton was canceled due to a scheduling conflict, Alt 92.1 and Live Nation are making up for it at the F.M. Kirby Center in Wilkes-Barre when red-hot indie group Bleachers plays with special guests MisterWives, Bishop Briggs, and Welshly Arms, along with an acoustic set by The Struts, on Thursday, Nov. 2 at 6:30 p.m.

Tickets, which are $25, plus fees, can be purchased here or you can enter to win a pair through NEPA Scene in several different ways.

The first is by filling out the form below. The second is through our Facebook page, where all you have to do is like, comment, and share this image to enter. The third is by attending the NEPA Scene Rising Talent open mic and talent contest at The V-Spot (906 Providence Rd., Scranton) on Tuesday, Oct. 31, where we’ll be giving out tickets to attendees throughout the night starting at 7 p.m. (Details about this event can be found on the Facebook event page.) And finally, your last chance to get them is by watching the Facebook Live stream of the award-winning NEPA Scene Podcast on Wednesday, Nov. 1 from 7 p.m.-8 p.m. We’ll be picking two commenters during that hour, so tune in and let us know that you want to be in the running.

New York City-based indie rock band Bleachers is the solo project of fun. guitarist Jack Antonoff. Formed while Antonoff was touring in support of fun.’s Grammy-nominated 2012 album “Some Nights,” the side project’s debut single, “I Wanna Get Better,” was released in the spring of 2014 by RCA, with an album, “Strange Desire,” following that summer.

After the record’s release, Antonoff put together a live band and launched a tour that lasted through much of 2015. That September, Bleachers released “Terrible Thrills, Vol. 2,” which featured versions of all the songs from “Strange Desire” performed by female artists, including Carly Rae Jepsen, Elle King, Tinashe, and Antonoff’s sister Rachel.

In June 2017, Bleachers released their latest album, “Gone Now.” Their first single off the album, “Don’t Take the Money,” made it to the Top 10 of the alternative song charts.

Sarah Grace McLaughlin, known by her stage name Bishop Briggs, is a British musician based out of Los Angeles whose 2016 single “River” was a commercial success, reaching No. 2 on Spotify’s global viral 50 and breaking the Top 10 on the rock airplay and alternative songs charts. Later that same year, she opened for Coldplay and made her national television debut on “The Tonight Show Starring Jimmy Fallon.”

With just one EP and some demos to their name, MisterWives garnered great buzz among major music publications like Interview, Paste, and MTV Buzzworthy. Following the release of 2015’s critically-acclaimed debut album “Our Own House,” touring internationally, and performing at some of the biggest music festivals around the globe, the New York City-based pop group is poised to do even bigger things in 2017.

On the band’s breakout single, “Legendary,” Welshly Arms lead singer and guitarist Sam Getz belts, “’Cuz we’re gonna be legends, gonna get their attention.” Breathing life into those words, this anthem from the Cleveland-based blues rock outfit captured the globe’s attention in 2017. Initially igniting Germany after its independent release, the song quietly spread like wildfire across countless influential Spotify playlists, cracking 15 million streams and 600,000 Shazams in under six months.

See NEPA Scene’s photos of Bleachers and Andrew McMahon in the Wilderness playing the 2015 Fuzz Fest here and read our review of The Struts’ first Wilkes-Barre performance here.