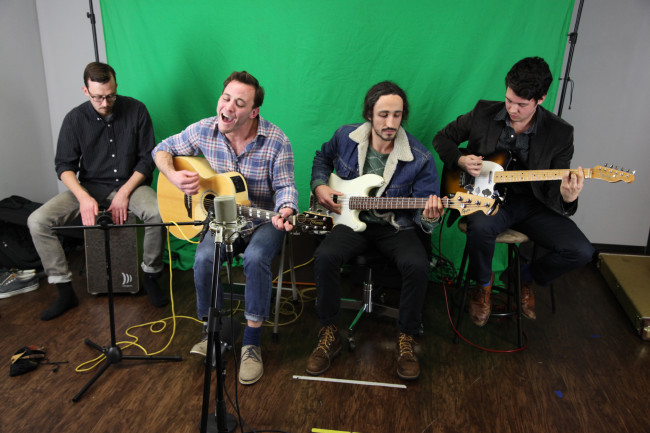 Last week during the live recording of Episode 33 of the NEPA Scene Podcast at Coal Creative’s production studio in downtown Wilkes-Barre, local folk funk band Fake Fight opened and closed the show with stripped down acoustic versions of three of their original songs – “Obliged,” “Mood Ring,” and “Blacklist.” Two of these songs are from their debut “Pete Horse” EP, which was released days later.

The performances can be watched on YouTube and streamed or downloaded via iTunes, SoundCloud, and Stitcher.

The NEPA Scene Podcast and this acoustic set are made possible by local sponsors Beer Boys, The Keys, Loyalty Barber Shop and Shave Parlor, the F.M. Kirby Center, Coal Creative, and viewers who tune in every week.

During the podcast, we sit down with the new band, which features members of Half Dollar and solo artists Jordan Ramirez, Brendan Brisk, and Michael Stec with Stephen Stec.

Before and during the interview, we drink crowlers of Sköll Och Hati by HammerHeart Brewing Company, Mass Rising by Jack’s Abby Brewing, and Sidecar Orange Pale Ale by Sierra Nevada Brewing that was put through a Randall of candy corn, which was made exclusively at Beer Boys. They all go over well for very different reasons.

We talk about this new project and how it came together, what “folk funk” is and how the term was coined, the local music scene and the importance of collaboration and encouragement over competition, the quick and organic development of their sound, their other musical projects and how they informed this band, open mics, going from the name Elijah Would to Fake Fight, opening for The Wood Brothers at the Sherman Theater in Stroudsburg, and more, including some funny stories, like that time Jordan got kicked out of a Renaissance fair.

We also read a few comments and give away free tickets to Alt 92.1’s first Alt 92.1’s concert with Bleachers, Bishop Briggs, Welshly Arms, and The Struts at the F.M. Kirby Center.