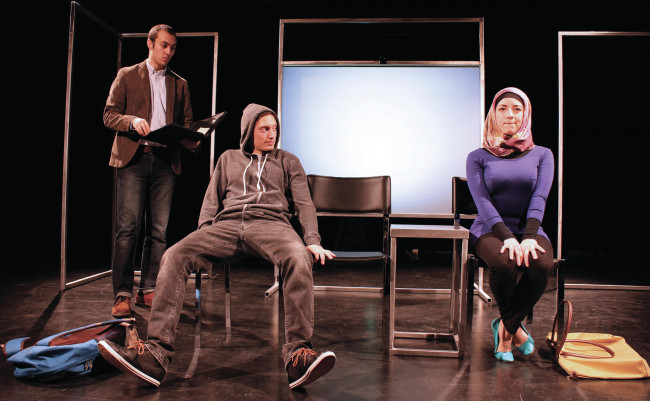 Tickets, which are $10, plus fees, are on sale now and available through the Kirby Center box office (71 Public Square, Wilkes-Barre), online at kirbycenter.org, and by phone at 570-826-1100.

“Jabber,” written by Marcus Youssef, tells the story of 16-year-old Fatima, whose parents transfer her to a new school after some graffiti saying “All Muslims must die” is found one morning on her old school’s wall. She is transferred to a school where she is the only person wearing a hijab.

The guidance counselor there, Mr. E., does his best to help Fatima fit in but, despite his advice, she starts an unlikely friendship with Jorah, who has a reputation for anger issues. Maybe, just maybe, Fatima and Jorah start to, like, like each other…

As their mutual attraction grows, the lines Fatima and Jorah cross as they grow closer become the subject of an intense exploration of boundaries – personal boundaries, cultural boundaries, and inherited religious and political boundaries. Fatima and Jorah discover that appearances matter; they’ve been exposed for their whole lives to images that begin to color their relationship: images of the Middle East, the working class, and how teenage boys and girls behave. Put all these reactive factors together in the social laboratory that is a high school and observe; is there a solution for Fatima and Jorah?

High school, like no other social space, throws together people of all histories and backgrounds, and young people must decide what they believe in and how far they are willing to go to defend their beliefs. Inside a veritable pressure cooker, they negotiate cross-cultural respect and mutual understanding. “Jabber” does its part to challenge appearances – and the judgments people make based on those appearances.

This thought-provoking, comedic and, at times, dark play deals with many issues facing teens, and people of all ages, today.

“Jabber” hit the road again for the 2014 International Performing Arts for Youth (IPAY) Spotlight in Pittsburgh on Thursday, Jan. 23, 2014. After showcasing, the play garnered interest from U.S. presenters and solidified a short U.S. tour, Geordie Productions’ first in over 12 years.

“Jabber” has also been translated into French by Governor General Award Winner Maryse Warda. The translation was supported by the Cole Foundation and by Playwrights Workshop Montreal.