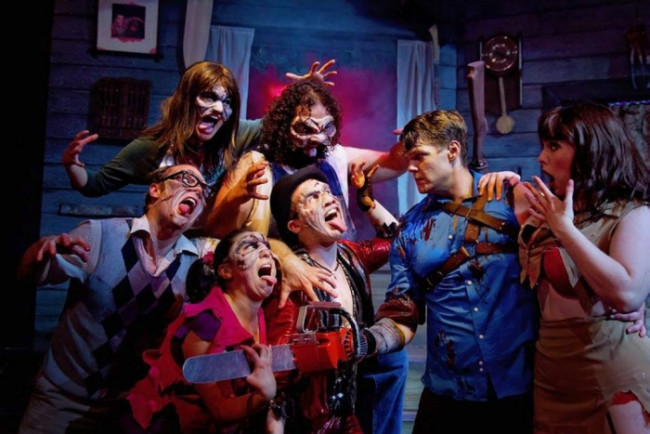 14 years after its Canadian debut and 11 years after its off-Broadway run, “Evil Dead: The Musical” was finally unleashed upon Northeastern Pennsylvania when its latest tour stopped at the F.M. Kirby Center in Wilkes-Barre on Monday, Oct. 30, appropriately just before Halloween.

The crowd was certainly in the spirit, wearing “Evil Dead” and other horror movie t-shirts as they took their seats, including the filled “Splatter Zone,” where they were guaranteed to be covered in fake cherry-flavored blood as it gushed out of the stage as well as the actors. Many wore white on purpose, turning the first few rows into a crime scene by the end of the second act.

The show is an amusing blend of elements from all three cult classic Sam Raimi films, horror movie tropes, and the goofy cheesiness of golden age Broadway musicals. It retells the story of Ash Williams, his girlfriend Linda, sister Cheryl, and friend Scott with his girlfriend Shelly vacationing in a cabin in the woods and accidentally unleashing Kandarian demons with the Necronomicon, the “Book of the Dead” bound in human flesh and inked in human blood. One by one, they become possessed and torture Ash, forcing him to cut off his own hand, but the mood is kept light and silly with constant jokes and humorous songs that point out the absurdity of the characters, their situation, and the horror genre.

“Evil Dead: The Musical” is funny, but because it relies so heavily on horror tropes and sophomoric quips, it makes the show a bit predictable and some jokes don’t land as well as they should because they can be seen coming from a mile away, even in the deep dark woods. In this production, a “Rocky Horror Picture Show” poster can be seen hanging in the background for those paying close attention, and while some critics have compared “Evil Dead” to “Rocky,” it never really reaches those heights, as it’s not as outrageous or shocking. The music isn’t as catchy or memorable either, with highlights including “Do the Necronomicon” (complete with a “Time Warp”-like dance number), “Housewares Employee,” and “All the Men in My Life Keep Getting Killed by Kandarian Demons.” The “Rocky Horror” soundtrack can stand on its own, while most of these songs are simple parodies without much replay value.

That being said, the show is still a lot of fun and made even better with an entertaining cast. Trent Mills was a great Ash, easily jumping from underdog loser to badass hero, and Christopher Fulton got some solid laughs as the dick-ish Scott. Jonathon Shaboo completely fit the role of “Good Old Reliable” Jake, a hillbilly who was included for easy laughs, but Saphire Demitro stole every scene as the possessed Cheryl, who butts in to torment Ash and the rest of the characters often with some good one-liners delivered with bursts of hilarious energy.

For a small production, the cabin set really shines, with every piece moving when the demons take over and little references (like the aforementioned poster and a Freddy Krueger glove hanging above the door) hanging around. The effects, like Ash cutting off his own hand and it running around, are well-done, and Linda’s decapitated head talking as a much-different body runs around is both clever and silly, which sums up the overall show well.

Those sitting the “Splatter Zone” were hit with their fill of bright red blood, with cast members making sure that everyone was covered even after gallons shot out of the stage, though for a show that advertises so much bloodshed, it’s surprising that most of it only takes place on stage until the very end. A good opportunity to splash the audience came and went at the close of the first act, and it isn’t until everything is almost over that the crowd gets rained on. This may be due to the fact that they don’t want people walking around the theater, particularly during intermission, staining the floors and everything else as they drip all over (the front rows were covered in plastic, and patrons were escorted out of a side exit after the show), but with its reputation preceding it, the “Evil Dead” should try to incorporate those interactive moments a bit more often, sending an occasional demon or blood-gushing wound aimed into the audience just to keep things interesting. Give ‘em some sugar, baby.

Judging by the bloody smiling faces of the crowd, though, everybody seemed to have a great time at this unique production that offered something new to local fans of the franchise (which still runs today in the form of the “Ash vs Evil Dead” TV series, starting its third season early next year) as well as newcomers looking for a groovy seasonal night out. Hail to the Kirby for bringing something different to NEPA to celebrate Halloween. 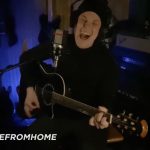 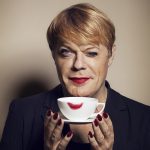