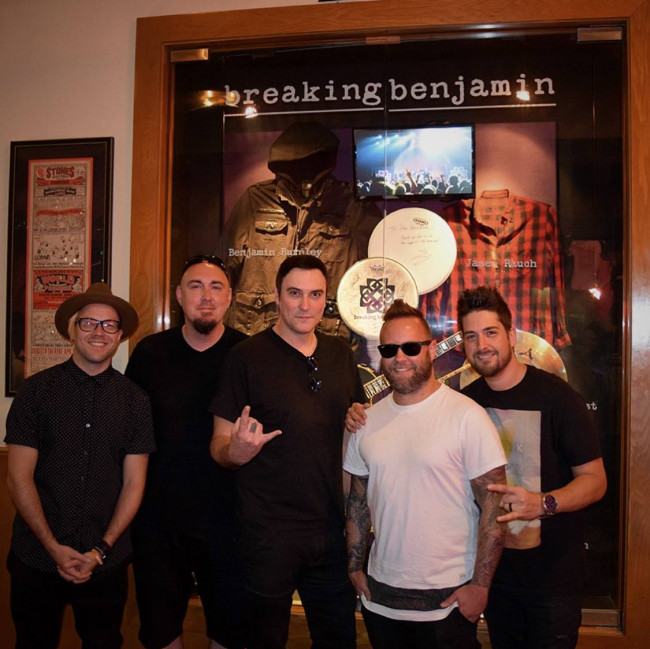 Multi-platinum rock band Breaking Benjamin will release their next single, “Red Cold River,” on Jan. 5, 2018, the first song from their upcoming album, “Ember,” and the first new music the Wilkes-Barre band has released since 2015.

The group, whose local members are vocalist/guitarist Benjamin Burnley and bassist/backing vocalist Aaron Bruch, are currently putting the finishing touches on their sixth studio album for Hollywood Records, the follow-up to 2015’s “Dark Before Dawn,” which debuted No. 1 on Billboard’s Top 200 and spun off three No. 1 rock radio tracks – “Failure” “Angels Fall,” and their latest hit single, “Never Again.” “Failure” was named the most played song on Active Rock radio for 2015, and “Dark Before Dawn” was certified gold in early 2017 after selling over 500,000 copies.

Following their successful fall acoustic tour throughout the United States, Breaking Benjamin will begin their nationwide tour with Avenged Sevenfold and Bullet for My Valentine on Jan. 12. The tour kicks off in Nashville and will hit arenas throughout North America, wrapping up in Washington in February. The closest stops to their hometown area will be the Santander Arena (700 Penn St., Reading) on Tuesday, Jan. 16 and the Bryce Jordan Center (127 Bryce Jordan Center, University Park) on Wednesday, Jan. 17.

While they’re more popular than ever in Northeastern Pennsylvania, as evidenced by their sold-out concert at The Pavilion at Montage Mountain in Scranton last year and their surprise acoustic show in Luzerne just a few weeks ago, Breaking Benjamin has amassed a sizeable and diehard fan base all over the world, both through their chart-topping music as well as their electrifying live performances.

2009’s “Dear Agony” debuted at No. 4 on the Billboard Top 200 and No. 1 on the iTunes Rock Album chart and was later certified platinum. The album also spun off the platinum-selling and No. 1 Active Rock single “I Will Not Bow,” where it stayed No. 1 for five weeks straight. Their discography also includes 2002’s “Saturate,” 2004’s “We Are Not Alone” (certified platinum), and 2006’s “Phobia,” which debuted at No. 2 on Billboard’s Top 200, hit No. 1 on the Rock Album chart, was one of the Top 50 selling rock albums of 2006, and was also certified platinum. It featured one No. 1 and two Top 5 rock radio hits with “Breath,” “Diary of Jane,” and “Until the End.” Additionally, “We Are Not Alone” spawned a pair of No. 1 radio hits with “So Cold” and “Sooner or Later.”