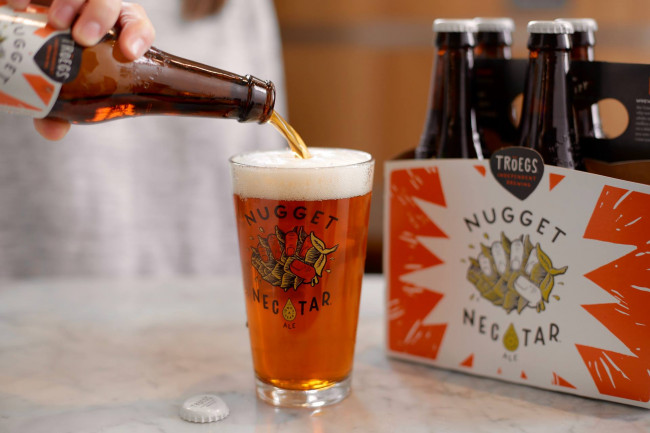 Beer Boys, the popular Wilkes-Barre bar and restaurant that features the area’s largest draft selection with 72 beers on tap, will be celebrating 18 years in business with 18 special brews from Tröegs Independent Brewing in Hershey on Saturday, Jan. 20, starting at 2 p.m.

With year-round, seasonal, limited release scratch beers, and casks on tap, there will be something for every craft beer lover to enjoy. Everything is available in pints and flights, which include free Tröegs glassware and giveaways while supplies last. The highlights of this anniversary party are a cask of Nugget Nectar, Nugget Nectar Nitro, Bourbon Barrel Aged Impending Descent, and some brewery-only scratch beers. While the party goes until midnight, patrons are encouraged to arrive early for the best selection.

Beer Boys (176 N. Washington St., Wilkes-Barre), which features a different brewery every year for their anniversary event, will also be mixing up some unique Mad Elf blends with Mad Dreams (made with 70 percent DreamWeaver Wheat and 30 percent Mad Elf) and Chocolate Elf (50 percent Nitro Chocolate Stout and 50 percent Mad Elf).

Once a year, as the newest humulus lupulus harvest arrives at Tröegs, the local brewery blends these super-fresh hops into an imperial amber ale called Nugget Nectar. Excessively dry-hopped, this 7.5 percent ABV beer is an explosion of pine, resin, and mango that will taste even more fresh from a cask.

Impending Descent is an already colossal imperial stout, but then it spent a year in bourbon barrels that smoothed its sharp edges, and armfuls of chocolate, vanilla, and raw cane sugar make it a meal – a warm, velvety, intense meal. Typically available in cork and cage bottles only, this 12 percent ABV beer will be on tap for this event only.

For more information on this event, see the Facebook event page.

Founded in Pennsylvania in 1996 by brothers John and Chris Trogner, Tröegs Independent Brewing is driven by a sense of adventure and curiosity. From the beginning, this 100 percent independent brewery has been built by family, friends, and kindred spirits who share a love of great beer.

When they were young, Chris and John Trogner were always inventing some new way to entertain themselves – like building skateboard ramps, dabbling in car top surfing, or creating a homemade cannon. And while their father was always shaking his head at their latest endeavor, you might also catch a prideful smile on his face.

When college approached, they went separate ways – John (the older one) headed to Philadelphia, while Chris took off for Colorado. With John finishing school and realizing he had little desire to jump into the corporate world, Chris found a new calling as the burgeoning microbrew scene captured his intrigue as much as the ski slopes. Before long, he was homebrewing and, as Chris relayed near-mythical tales of guys making an actual living brewing beer, a marquee of lights flashed in John’s head, so he made the decision to join his brother for the Great Beer Rush.

With Chris grinding through school (and moguls), John scoured Boulder for a job, any job, in beer. One day, he walked into Oasis Brewpub just as they were having “a little emergency.” He asked if there was any brewery work available; a guy walked out from the back, tossed John a t-shirt, and handed him a mop. A brewer was invented.

Suddenly, there was a multitude of crash courses in electrical wiring, plumbing, welding, and formal brewer training as John found his creative faucet. At the same time, Chris made beer the focus of every project assignment, started hatching a business plan and, just after graduation, headed to brewing school in Europe. One night, over probably a few too many test brews, they hit upon the name – Tröegs. It combined their last name with kroeg, the Flemish word for pub.

However, the draw of home got the best of the wayward brothers. As their brewery idea moved from incubator to fledging, the boys returned to their native Central Pennsylvania to launch Tröegs Brewery. They tacked the odd moniker on an old warehouse on Paxton Street in Harrisburg, sold their first pint, Tröegs Pale Ale, on July 18, 1997, and lived happily ever after…

Oh no, wait – this is the where the story of Tröegs Independent Brewing begins. Chris and John jumped headlong into their brewery and found a lot of support from family and friends along the way. In the beginning, it took 11 people to run the packaging line, so pretty much all hands on deck. Some of these early volunteers still walk the halls today, serving as the foundation of the Tröegs community.

As the brewery grew, the Tröegs community morphed into a home for kindred spirits with wide and varying ideas, which partly explains the Tröegs portfolio of tangential offerings. Troegenator, a big brooding doublebock as your lead beer, why not? Hopback Amber, made with a piece of brewing equipment John meshed into the brewhouse, why not? Mad Elf, their holiday offering with way more production headaches than profits, why not? In a very real way, every beer at Tröegs is a Scratch Series beer – a random concept the brothers hatched for their 10th anniversary that still serves as the launching point for new beers.

In early 2010, as the old Harrisburg warehouse was starting to feel like 20 ounces of beer in a 16-ounce pint glass, the Tröegs team started to dream of a new brewery. What Chris sketched became a reality in Hershey on Oct. 24, 2011.

The new facility has two brewhouses – one for daily production and another smaller pilot brew system for research and development beers. The brewhouse is in the middle of the tasting room, and a large public tour path cuts through the heart of the facility, pulling back the curtain for all to see. Soon after opening, a snack bar was added to create food as original and interesting as the beer. The Scratch Beer Series continues to thrive as more than 200 different brews have been created, featuring both local and exotic ingredients to feed the collective muse.

The Troegs “family” continues to expand, as more than 175 co-workers have joined to welcome visitors with open arms. Feel free to ask them questions – they all love to talk about Tröegs and their continuing exploration. Why not, indeed.