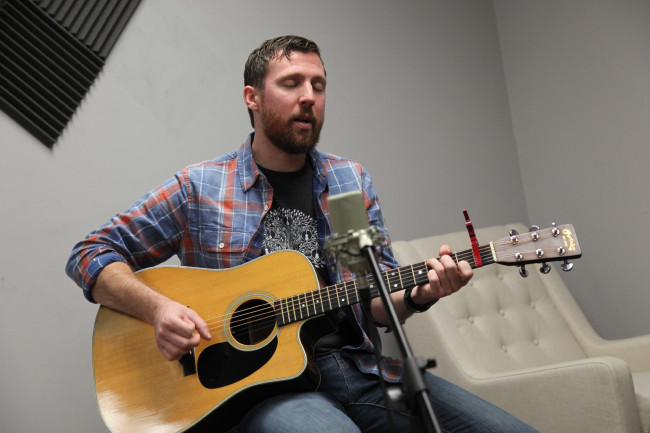 During the live recording of Episode 42 of the NEPA Scene Podcast on Jan. 3 at Coal Creative’s production studio in downtown Wilkes-Barre, Scranton folk rock singer/songwriter Mike Mizwinski closed the show with an acoustic version of his song “Heroes” from his new album “A Year Ago Today,” which will be released on Friday, Jan. 26, kicking off an album release tour that stops locally at the River Street Jazz Cafe in Plains, Sarah Street Grill in Stroudsburg, the Ardmore Music Hall in Ardmore, The Cooperage Project, The Pines Eatery and Spirits in Hazleton, and Turkey Hill Brewing Company in Bloomsburg throughout January and February. Digital copies will be available on Feb. 14.

“Heroes,” one of his favorite songs on the new album, was written on May 27, 2017, the night Gregg Allman died at age 69 due to complications from liver cancer. It started out as a nod to Allman and eventually became a tribute to the many great musicians we’ve lost over the last few years.

“The Allman Brothers were a huge part of my life growing up. I saw them even before I saw the [Grateful] Dead, I think. I saw the Allman Brothers a lot and we ended up, after the first Peach Fest, working with some people that were working with them. I got to go to the Beacon Theatre and see those guys play and go backstage and hang out in the dressing rooms,” MiZ recalled during the podcast.

“When Gregg Allman passed away, that meant a lot to me. … I sat down and started writing this tune as sort of an ode to him, but now it’s turned into this universal song.

“So now, when I listen to this song and I play it, I’m just thinking about Merle Haggard and Tom Petty and all these awesome people. It’s like my ode to my heroes, man, the people who went before us.”

The performance can be watched on YouTube and streamed or downloaded via iTunes, SoundCloud, and Stitcher.

The NEPA Scene Podcast and this acoustic performance are made possible by local sponsors Beer Boys, The V-Spot, The Keys, Loyalty Barber Shop and Shave Parlor, Coal Creative, and viewers who tune in every week.

Stream/download the song on SoundCloud:

During the podcast, we talk with MiZ about growing up around artists and musicians in his family got him into music, listening to the Grateful Dead at a young age, the dedication of jam band fans, the current state of the rock music industry, building a musical community or family, how he gathered some of the area’s best musicians together to record an original song in a living room over the holiday break, what inspired the songs on this album and what he was going through at the time, his new outlook on life, the recording process with LogicPaws Soundlab in Hawley, the story behind the name of the record, what his song “Heroes” means to him and a fan who saw him play it, plans to tour across the country, how he ended up working with Grateful Dead publicist and music historian Dennis McNally, crazy gigs and memorable road stories, opening up honestly about his past drug addiction and lifestyle and turning things around now in recovery, and more.

We also answer some questions and react to comments from live viewers.