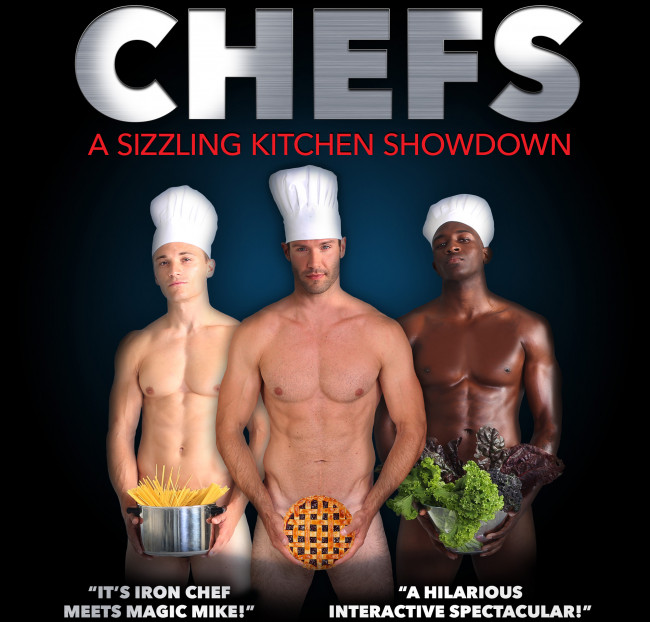 Feast your eyes on “Chefs.” These hilarious (and delicious) hunks give you a peek behind the apron as they slice, dice, and spice things up in the kitchen through a series of escalating culinary challenges where the stakes are high – if they lose a challenge, they lose their shirt. Literally.

“Chefs” is a “hilarious and interactive spectacular” where you will vote for the winner and may even join the boiling hot chefs on-stage for uproarious cooking demonstrations. Outrageously bold and hysterically funny, “Chefs” is “too hot for TV,” making it the perfect night out.

Michelin-starred celebrity chef and world-renowned restaurateur Patrick Wilde is hosting a tournament for the once-in-a-lifetime chance to become a chef at his highly anticipated new restaurant, Eros, which will open next year at a secret location yet to be announced.

Chef Patrick is a stripper-turned-chef who used the money he made from three long years on the pole to build his culinary empire. He is offering other male strippers the opportunity to “get off the pole and into the pantry!”

“Chefs” competing in the tournament must prove their culinary skills to Chef Patrick through a series of escalating challenges that highlight their skill and dexterity around the kitchen. If a chef wins a challenge, he gets to choose the next mystery ingredient from Chef Patrick’s on-stage pantry and become one step closer to becoming a chef at Eros.

If a chef loses a challenge, he loses an article of clothing. The winner of the tournament will become a chef at Eros and the losers will go back to the pole.

Mills Entertainment is a leading producer and promoter of branded live entertainment. Mills collaborates with top brands and personalities to develop, market, and produce live events throughout the United States and worldwide.