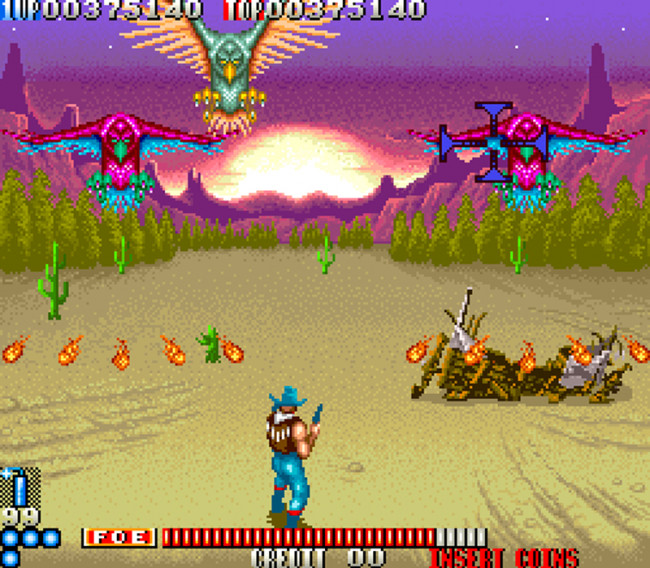 Happy 2018, readers! Turn to Channel 3 will continue showcasing games of years past in the new year, so we begin by taking a trip back to the arcades this month with some unsung heroes of that era, if you will.

Today’s topic is a game with a ton of fun and twice as much in firepower. Don’t stray too far from your holsters as we head into the Wild West world of “Blood Bros.!”

Perhaps not the most crisp and clear of arcade shooters, the basic, but action-packed soundtrack of “Blood Bros.” does just enough to keep you reloading your gun and continuing to fire away at the bad guys, and that’s what soundtracks should do for games like this.

You won’t find any over-the-top work by composers here, and the sounds may appear more console and less arcade in nature but, in truth, you’ll find yourself listening more to the whizzing bullets, big explosions, and cries of death from your enemies and less the actual musical score.

“Blood Bros.” came into arcades in 1990 and, for the time, the graphics were pretty solid, with the emphasis being more on the backgrounds (and the destruction of them at times) than anything else. This isn’t to say your characters, the enemies you face, or the bosses you must take down are anything short of amazing either, but you can tell extra care and detail went into bringing the Wild West to the arcades of the ‘90s.

Like other similar games, such as “Sunset Riders” and “Wild Guns,” “Blood Bros.” can be quite difficult at times in terms of aiming properly to get your shots off, and when you add in increasingly difficult enemies shooting at you in increasing speeds, it makes it that much tougher for gamers that aren’t used to these crosshair mechanics. There’s something insanely fun about rolling from side to side when needed and firing off shots at far off enemies. It’s pretty cool. Power-ups in this game are crucial at times, but holding onto them for longer than a few seconds can be extremely difficult, as it seems that whenever you get one, it is as if the A.I. knows this and zeroes in on you.

Boss fights are frustrating but epic encounters, especially later on in the game when giant birds and snakes try to take you down and make your life out West an unforgiving hell. “Blood Bros.” is one of those games that has a steep learning curve, but once you master it, you will find yourself considering it one of the best shooters in the arcades.

“Blood Bros.,” in the same vein as games like “Contra,” creates a love/hate relationship for whoever is playing it but, in the end, it is an experience within the realm of arcade gaming that you won’t soon forget, I assure you. With tough but fun action, gameplay mechanics that, while tricky at first, are truly innovative for the time, and a learning curve that makes you earn your stripes and better appreciate what you’re playing, “Blood Bros.” is a romp through the Old West that is definitely worth saddling up and playing.

I hope you enjoyed this review. Next time on Turn to Channel 3, we will be playing one of the most unsung heroes in Capcom’s vast arcade collection – “Cadillacs and Dinosaurs!”

Until then, keep warm and keep that retro gaming fun rolling along because, in subzero temperatures, there’s never a bad time to game on! 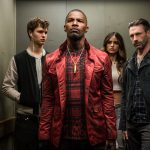 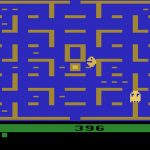